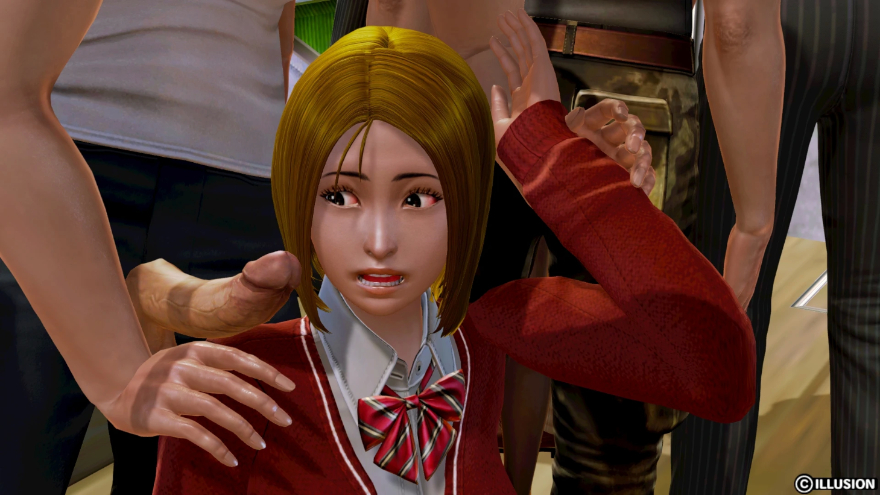 You find a woman bleeding out in a subway tunnel! As soon as you run over to help her, she stabs you with a syringe! The next thing you know, you wake up as a woman!

While your original name is Oliver, once you become a woman, you take on a new name, decided by the player. However, halfway through the story you will temporarily revert back to your male form, so don’t approach this as a permanent gender swap title.

The story of the syringe and reason for your sex change are explained at the halfway point of the game as some medical research gone awry. It’s not simply a sex change, rather, it’s an experimental technology created to give you the appearance of a specific person. Sort of like plastic surgery but via an injection.

The game is filled with various choices that will affect which scenes you will view or skip. For example, do you show your panties to the vagrant? When you get to school, do you hang out with the boys or the girls? The choice is yours! Except during the multiple mandatory lesbian scenes. Straight sex can be avoided, but lesbian sex is mandatory.

Chemical Change is a visual novel created in the Ren’Py engine. Click the screen to progress the story. The game prompts you with branching dialog choices at key moments in the story. Press CTRL to skip dialogue.

These are not mysterious choices. In fact, when it’s time to lose your virginity you are literally given five options in a list format! Every choice is clear and direct, but it does spoil the experience.

The 3D character models in this game are a mixed bag. While the women all look like gorgeous barbie dolls, the men look like the victims of a nuclear waste spill! Even your little brother has this inhumane face that you’ll probably never get used to.

The vast majority of the game takes place in only a handful of locations. There’s the player home, the movie theater, your workplace, and a couple of others. Visually each area feels like a small room that’s not very distinct from the others. Even when you’re outside, it doesn’t really feel like you’re outdoors. It just feels like a stage with green flooring.

I took 80 photos for this review, of which only 20 are actually good. Like when dicks are just absurdly long and thin, they look more like broom handles than penises. Or in the theatre where the seats are a poorly shaded black leather, like the light is coming from the ceiling instead of the movie screen. Altogether, you can tell this developer isn’t skilled at visuals.

Chemical Change has no voice acting. Similarly, sound effects are completely nonexistent. Even when your character is deflowered for the first time, not a single sound effect is played. Which probably makes sense since the music is obnoxiously intrusive.

There is no title music, but there are three tracks in-game. First there is the general track that plays in the background of the entire game from start to finish. The bass guitar is impressive at first, but gets repetitive.

The second is the tension track that uses short riffs on the electric guitar like some teenager who just learned to play. Third is the sex music, which is a funky digital synth that I hate. In all honesty, the game would probably be better off staying silent. Especially the third track, which has constant pitch and tone changes that are extremely distracting from the lewd experience.

Although the game’s marketing emphasizes deflowering and impregnation, those both occur at the end of the game with very little fanfare of excitement. And if you wanted the little brother fetish, he looks like an adult midget with a deformed face. If you were hoping for corruption, it’s done poorly since the protagonist lets things happen to them instead of gradually getting lewder.

Even the writing in this game is terrible! Like when your little brother tries to bang your character, you yell “What are you doing”, and he says “nothing”, and you say “how is this nothing?”. I understand it’s a free game, but I expected more than 4 words per sentence.