John and Lizzie are a dysfunctional couple: A big evil pharmaceutical corporation named KoiTec did drug experiments on Lizzie’s mother while she was pregnant. John is clinically depressed and Lizzie is a murderous psychopath. Their mental illnesses complement each other perfectly, making for a riveting romance that can end in tragedy anytime.

This game continues the storyline from the first Crimson Gray game, taking on Lizzie as the point-of-view character. You are treated to her neurotic rambling inner dialogue that goes over things she’s obsessed about: Killing love rivals, maintaining her battle prowess, faking normalcy, over-analyzing people’s emotions, the status of her knife collection.

If you missed the hype, you should absolutely go read our review of Crimson Gray. 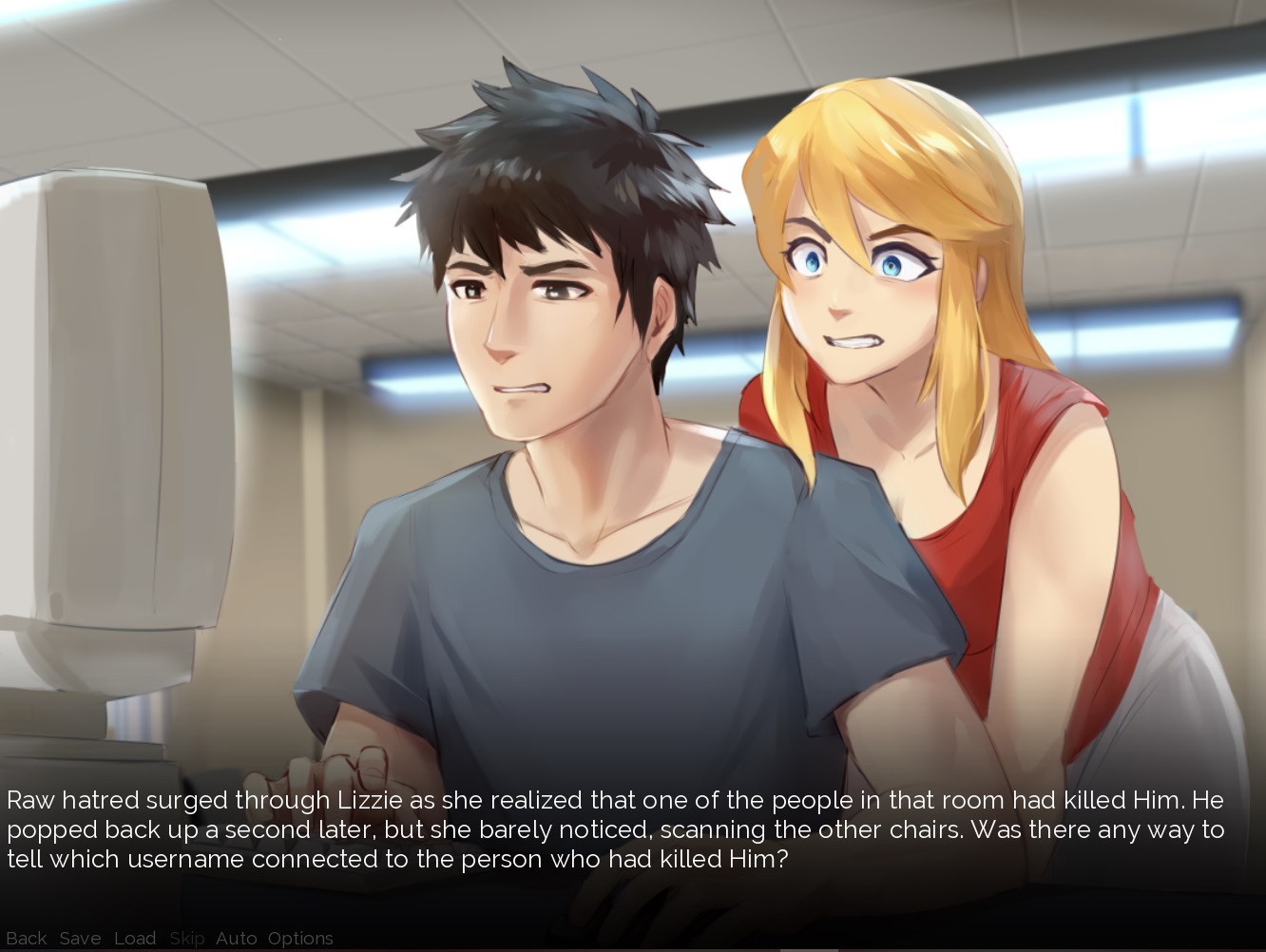 Lizzie is an interesting character, because she’s very erratic in her behavior; She can go from being completely serene to chopping someone with an axe at the drop of a hat. She has no moral compass, and no fear or guilt stopping her from killing other people. She’s only scared that other girls will seduce his would-be husband. In the first game, many endings showed her killing John and herself, like a re-enactment of Romeo and Juliet.

Playing this game, I was expecting gruesome death scenarios with blood splattered across the walls. I was expecting to see Lizzie’s knife collection, glimpses of her notebooks, all the creepy details that elevated the horror aspect of the first Crimson Gray. But this game seems like it was rushed out, because there’s tons of visuals blatantly missing. Also, the soundtrack is almost completely recycled from the first game.

I’ve played this game through once now. It was sadly an underwhelming experience. While the writing itself is flawless, the contents are unsatisfying. Most of the events are mundane, like John playing videogames at a LAN party, Lizzie attending classes, uneventful conversations between John and Lizzie. Scenes where someone died were short and lacking both visuals and unique text describing how Lizzie executed the kill. If you’re making a horror game that entertains your audience’s violent tendencies, then give me my fucking ultra violence. 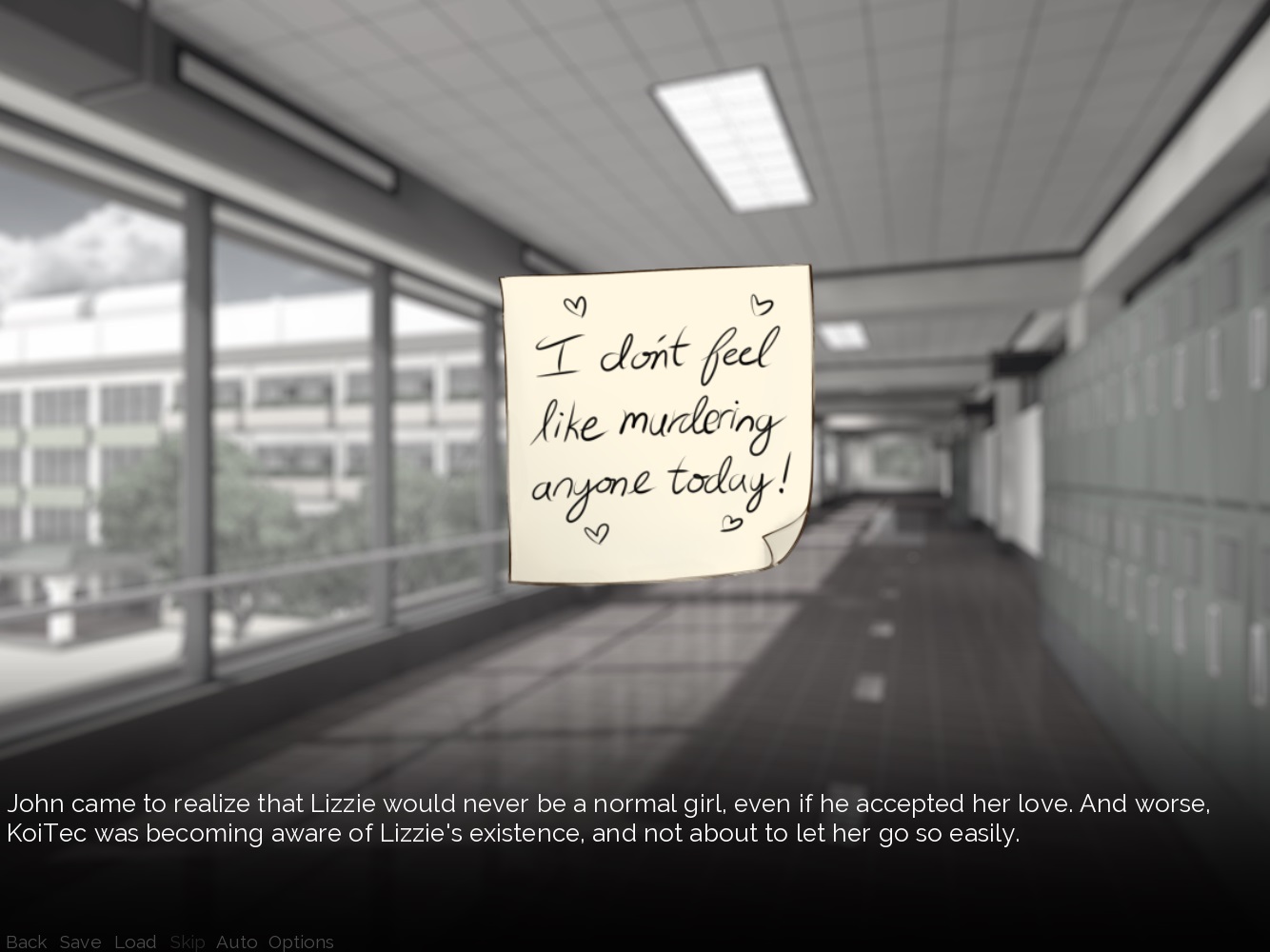 I feel like every decision Sierra Lee made with this game was destructive to the overall result, including using Lizzie as the point-of-view character. We don’t get to see her face! Her delicious murderous face is hidden “behind the camera”. Instead, we’re staring at the emotionless depression-prone John, and his nerdy male friends. It’s a huge problem when your hentai game doesn’t show sexy female characters but on the bare minimum number of occasions. As a male gamer, I was expecting to see Lizzie in varied tight outfits, showing all the delicious girly bits wrapped inside thin layers of fabric.

As sex appeal goes, Lizzie is a true high-status female. She’s a beautiful, dangerous, high-risk girl that requires a special strategy to make her drain your balls. Either your balls get drained, or your arteries. It’s like dipping your dick into a beehive. This dynamic is lost when she’s the main character, instead of being the target of romance. 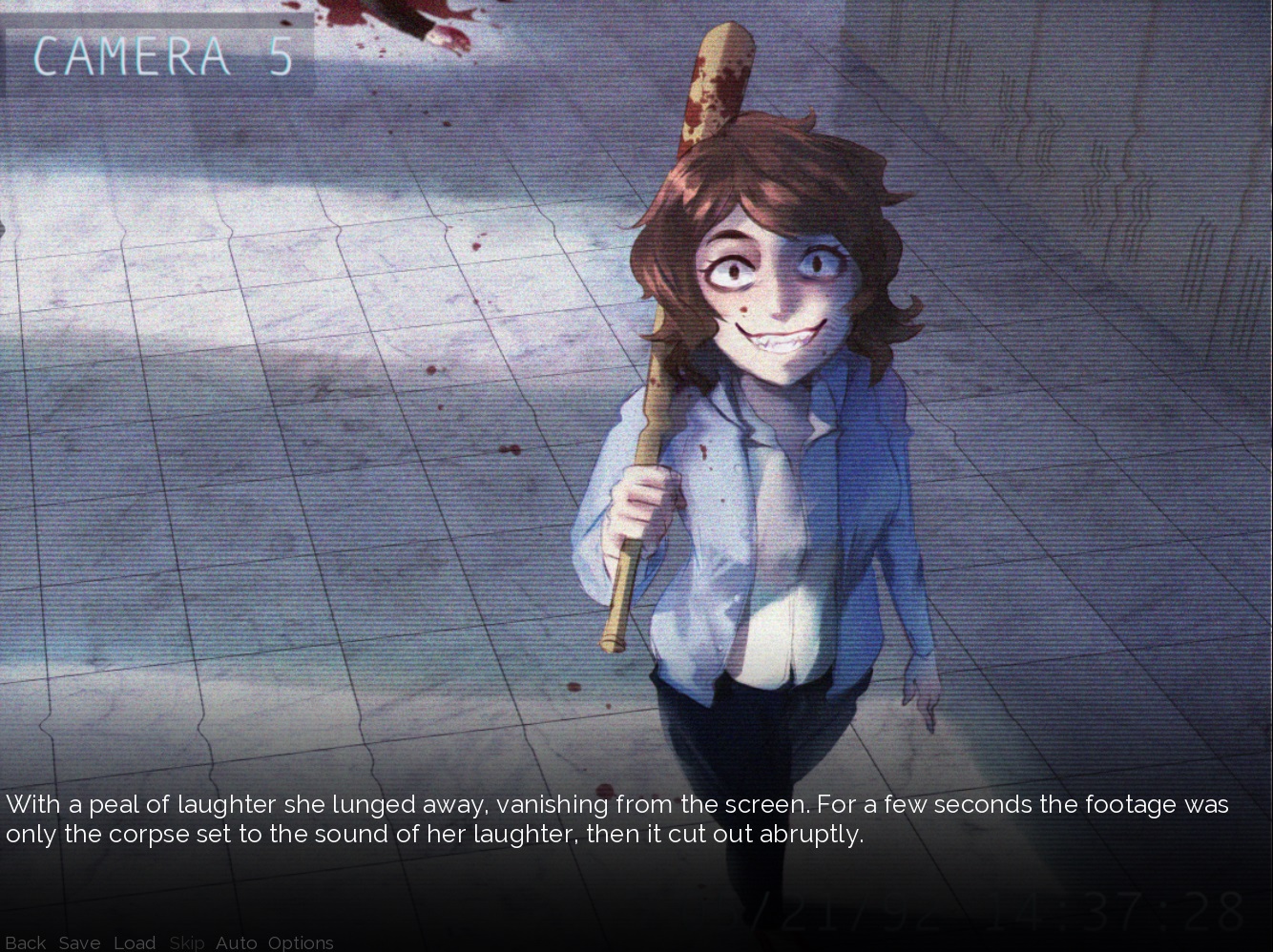 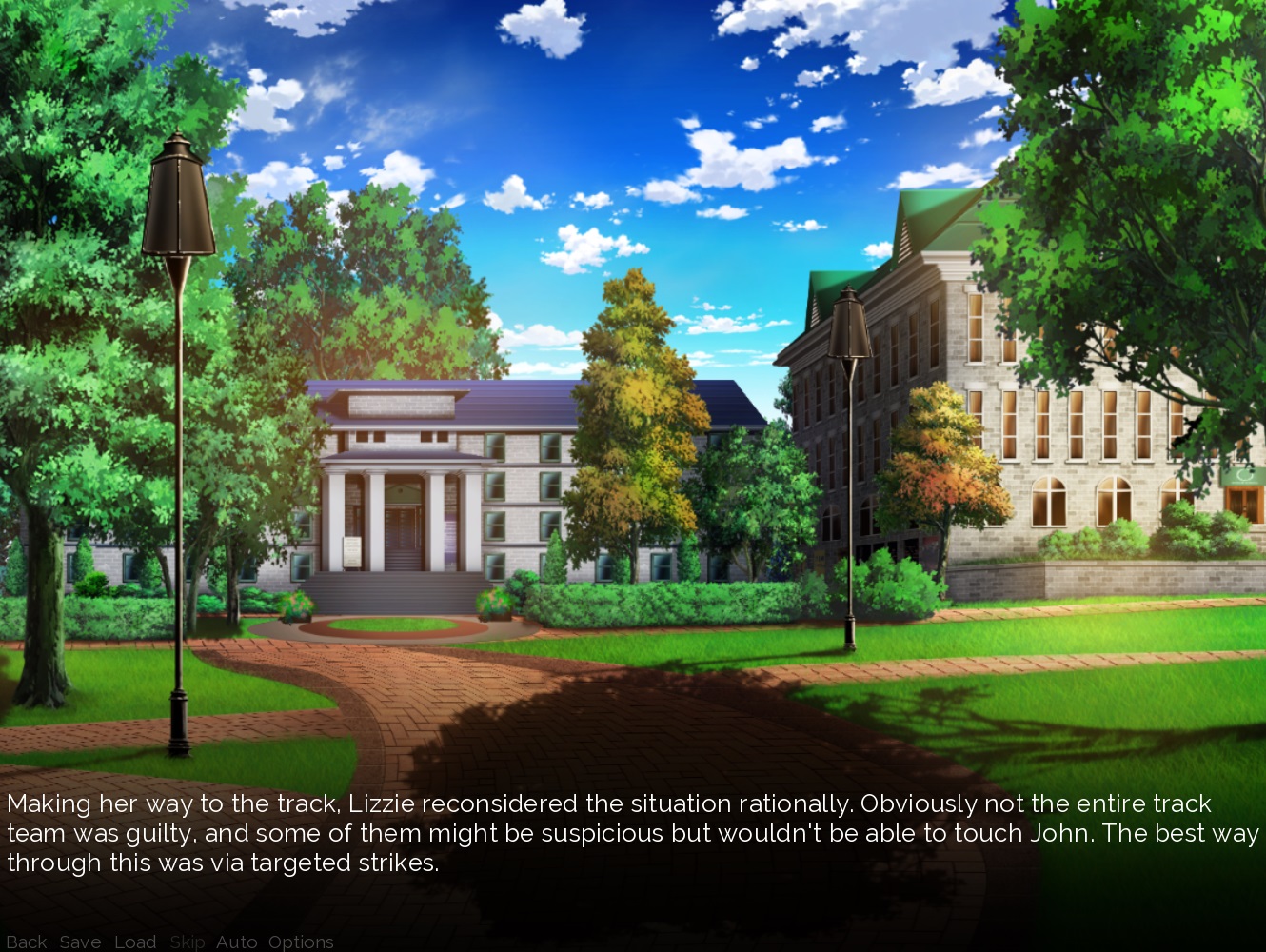 The only explanation I can think of is that this game was a side-project with unfinished assets, with all the artists leaving midway to production, and Sierra Lee decided to rush it out. All the edginess and fun is missing in this game. The dialog is dull. The side characters are boring. There’s no creative spark. What happened?

Also, the branching choices seldom do what they advertise. The choice to “Kill the track team” was an interesting path to take, but almost every time Lizzie pussied out against my wishes. I don’t think it’s good design to provide the player with choices with opposite, or unpredictable results. The way this choice system in visual novels is supposed to work is that the player gets their way in the moment, and they deal with the unforeseen long-term consequences later.

There’s a chance that I simply made every wrong choice in dialog options, and didn’t unlock any good stuff. I’m still playing the game for my official review, but it’s not looking good. In a game where you can “make the wrong choices”, there still shouldn’t be options that result in a dull experience for the player. 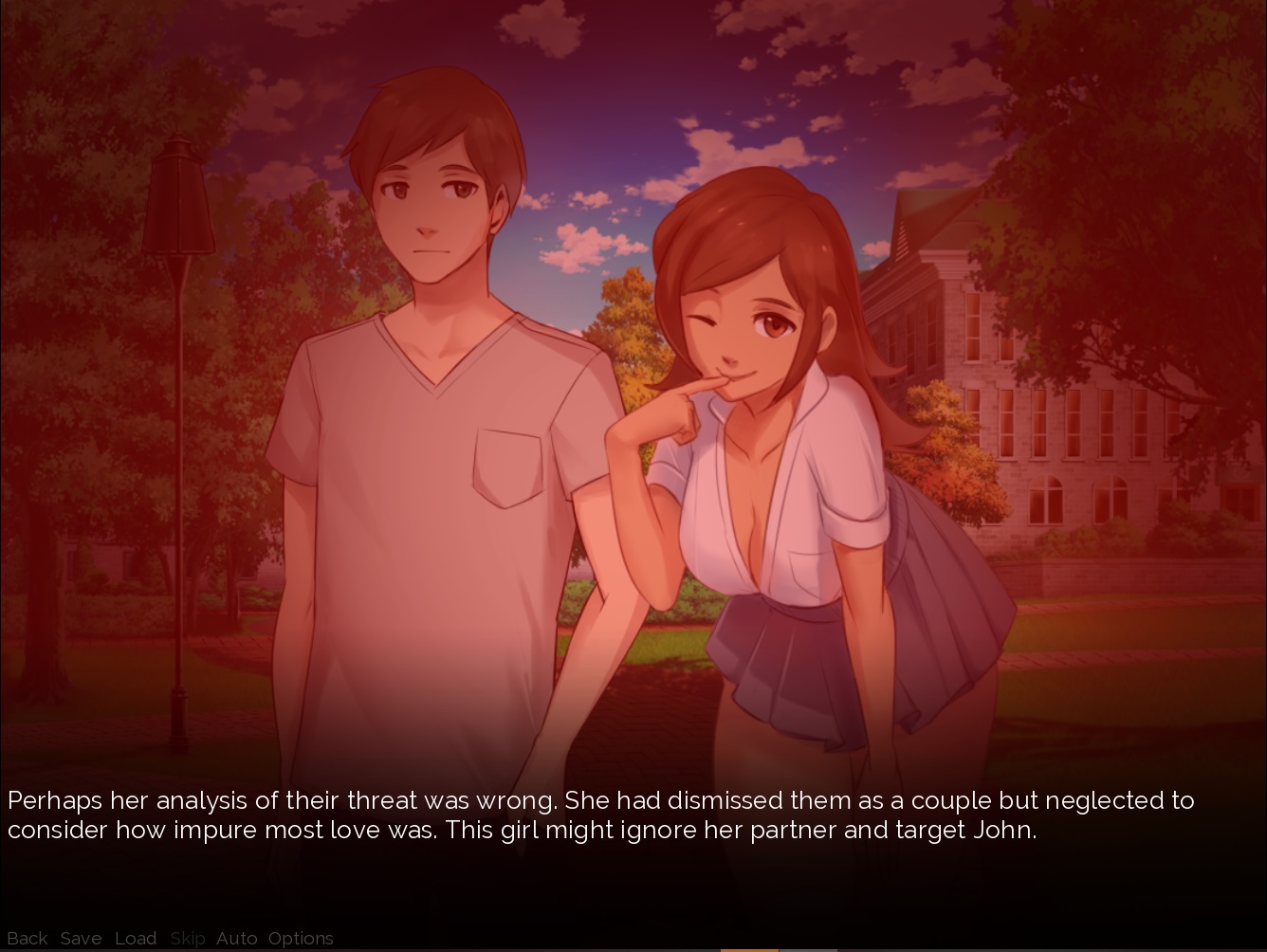 The ending I got was one where KoiTec successfully lobbied the government for relaxed regulations, and received a carte blanche to stuff all American school kids with drugs. Lizzie and John heard the news from the television, and they were very sad about it. The presentation was less than dramatic. The game ended there.

I don’t know if you’re going all conservative because of some life crisis, Sierra Lee, but this game needed more fucking and killing. Crimson Gray is one hit away from becoming an undying classic. The first game was A New Hope, but this game was not Empire Strikes Back. This was The Last Jedi. That’s how bad you fucked up, bitch.