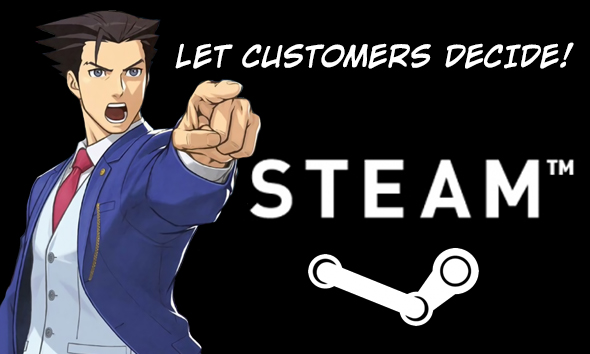 In a recent announcement, Valve Corp, has responded to the recent controversy over censorship of certain games on their digital storefront, Steam, by overhauling its rules in favor of a hands-off censorship policy.

Valve’s recent blog post announcing the overhauling of its censorship policies comes off as a tad out of the blue, given the stony radio silence that characterized the company in the days immediately following the censorship controversy; silence that would only later taper off into a quiet restoration of most removed titles and discreet apologies to individual devs and publishers harmed by the decision.

By the admission of Valve’s Erik Johnson, this period of quiet was not a deliberate communications lockdown, but rather, a sign of the company and its employees struggling with how to handle the situation. From Valve:

Recently there’s been a bunch of community discussion around what kind of games we’re allowing onto the Steam Store.

As is often the case, the discussion caused us to spend some time examining what we’re doing, why we’re doing it, and how we could be doing it better. Decision making in this space is particularly challenging, and one that we’ve really struggled with. Contrary to many assumptions, this isn’t a space we’ve automated – humans at Valve are very involved, with groups of people looking at the contents of every controversial title submitted to us.

Similarly, people have falsely assumed these decisions are heavily affected by our payment processors, or outside interest groups. Nope, it’s just us grappling with a really hard problem.

The conclusion that Valve has reached and announced today is one that will probably surprise people familiar with the age-old controversy of censorship in gaming, where publishers and developers alike have opted to play it safe in order to avoid negative publicity or, in the case of titles sold in retail outlets, the dreaded, game-killing AO rating.

In a surprise twist, Valve has landed on the side of what amounts to complete and total liberalization of its standards, wherein any and all games will now be welcome on the Steam storefront, no matter how controversial or offensive, provided that no illegal content is involved.

[…We] ended up going back to one of the principles in the forefront of our minds when we started Steam, and more recently as we worked on Steam Direct to open up the Store to many more developers: Valve shouldn’t be the ones deciding this.

Those choices should be yours to make. Our role should be to provide systems and tools to support your efforts to make these choices for yourself, and to help you do it in a way that makes you feel comfortable.

With that principle in mind, we’ve decided that the right approach is to allow everything onto the Steam Store, except for things that we decide are illegal, or straight up trolling.

Taking this approach allows us to focus less on trying to police what should be on Steam, and more on building those tools to give people control over what kinds of content they see. We already have some tools, but they’re too hidden and not nearly comprehensive enough.

We are going to enable you to override our recommendation algorithms and hide games containing the topics you’re not interested in. So if you don’t want to see anime games on your Store, you’ll be able to make that choice. If you want more options to control exactly what kinds of games your kids see when they browse the Store, you’ll be able to do that.

And it’s not just players that need better tools either – developers who build controversial content shouldn’t have to deal with harassment because their game exists, and we’ll be building tools and options to support them too.

Of course, while this statement seems to be very sweeping and all-encompassing, those paying attention may notice some caveats. The first is, of course, that what’s illegal or not varies around the world – even between geographically and jurisprudentially similar countries like the US and Canada, the different countries of Latin America, or between the different countries in the EU, never mind other places where what’s acceptable may be radically different from the West like China or the Middle East.

The other and more blatant one is that “trolling” is an immensely subjective notion, and outside of a particular admission of bad intent, one often existing in the eye of the beholder. As an example, this harkens back to the controversy around the title Hatred, which came close to being bullied out of Steam. One could argue that making a game like hatred that’s all violence and edginess, was the epitome of trolling; and yet there’s no arguing that Hatred was a full-fledged isometric shooter, developed under a far higher standard than a lot of its fellow Steam titles. This dichotomy isn’t unique, and goes back to 90’s classics like the original Postal.

Valve more or less admits this further down its announcement, pointing out that a loosened censorship policy will not mean the end of its screening games’ content during their submission process, and reserving the right to ban developers that are not honest about their content. From Valve:

As we mentioned earlier, laws vary around the world, so we’re going to need to handle this on a case-by-case basis. As a result, we will almost certainly continue to struggle with this one for a while.

Our current thinking is that we’re going to push developers to further disclose any potentially problematic content in their games during the submission process, and cease doing business with any of them that refuse to do so honestly. We’ll still continue to perform technical evaluations of submissions, rejecting games that don’t pass until their issues have been resolved.

So what does this mean? It means that the Steam Store is going to contain something that you hate, and don’t think should exist. Unless you don’t have any opinions, that’s guaranteed to happen. But you’re also going to see something on the Store that you believe should be there, and some other people will hate it and want it not to exist.

It also means that the games we allow onto the Store will not be a reflection of Valve’s values, beyond a simple belief that you all have the right to create & consume the content you choose. The two points above apply to all of us at Valve as well. If you see something on Steam that you think should not exist, it’s almost certain that someone at Valve is right there with you.

It is worth noting that the two messages delivered in the announcement — Valve greatly relaxing its censorship policy while simultaneously still reserving its right to ban developers they feel act on bad faith— are not necessarily contradictory. They don’t have to cancel each other out, though there does lie the possibility they could. It all depends on how Valve acts from here on out.

Why is this article nearly identical to https://www.lewdgamer.com/2018/06/07/steam-announces-overhauled-content-policy-decides-not-to-censor ?

Because I have one of the writers of Lewdgamer writing for my site.