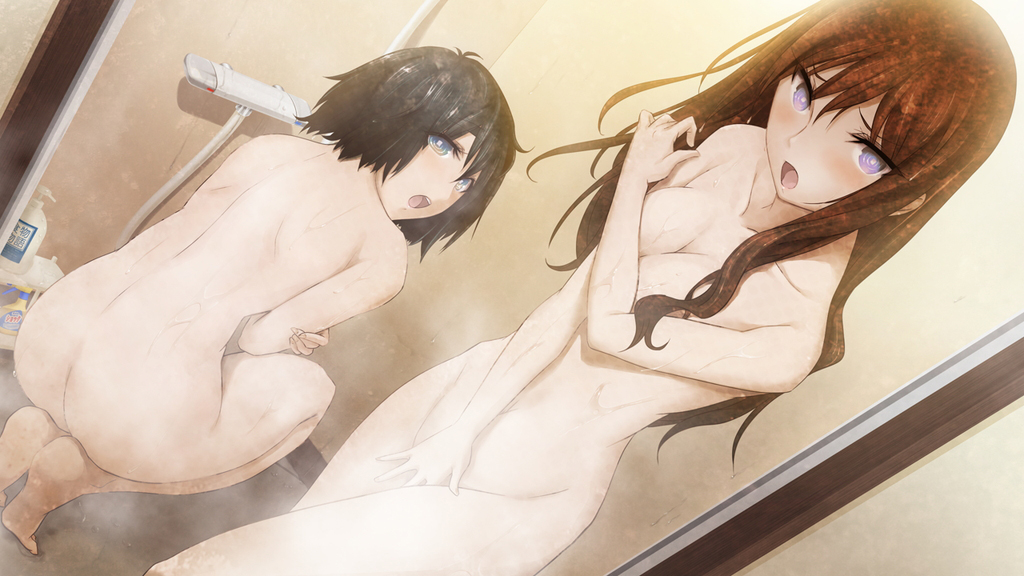 Steins;Gate, an adult visual novel developed by 5pb and Nitroplus. First published by 5pb, and later by Spike Chunsoft. Released for Steam on 9th September 2016. Available for download on JLIST and Steam for $29.99. Available for PC Windows operating systems. Full voice acting. No sex scenes.

This game is a masterpiece of Japanese science fiction. The masterfully told story explores time travelling in a realistic fashion. It’s full of tear-jerking moments and a nice cast of adorable girls. 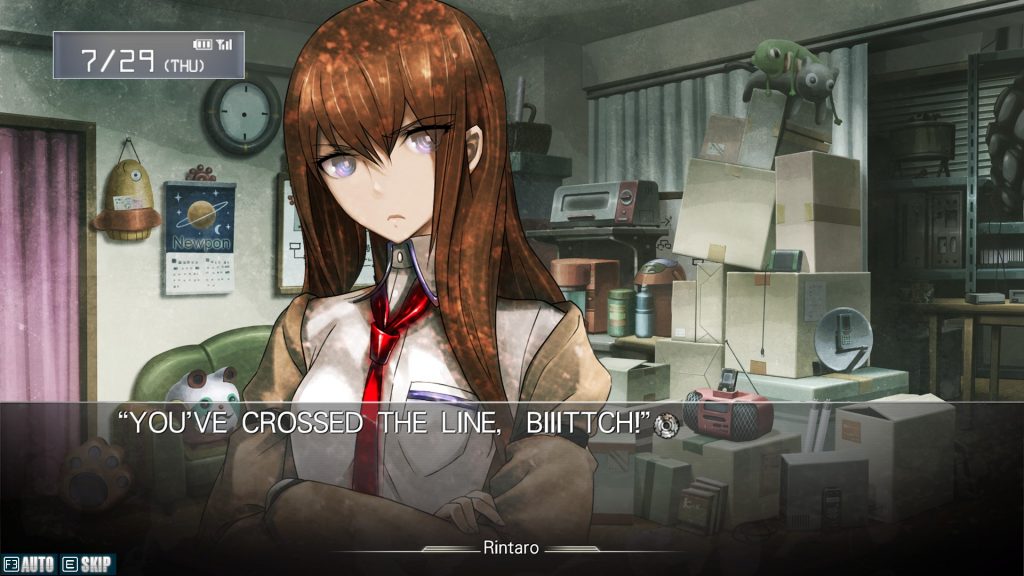 The story follows Okabe Rintaro, a socially inept university student, as he gets caught in a life-threatening conspiracy. The day that changes his life begins like any other. Okabe and his childhood friend, Mayuri, attend a time travel convention hosted by a quack scientist claiming to have discovered how to make a time machine. The scientist turns out to be a sham.

Before he can expose the man as a fraud, Okabe is interrupted by a girl he’s never seen before. Makise Kurisu introduces herself, then asks him a strange question. She talks to him like they’ve met. Okabe runs away from the strange girl to find Mayuri. By then, the convention has ended, and they prepare to go back to their daily lives. They are interrupted by a blood curdling scream, and Okabe goes to investigate. He finds Kurisu’s dead body and leaves the area in a panic.

The next day, in a shocking surprise, Okabe encounters Kurisu. Alive. 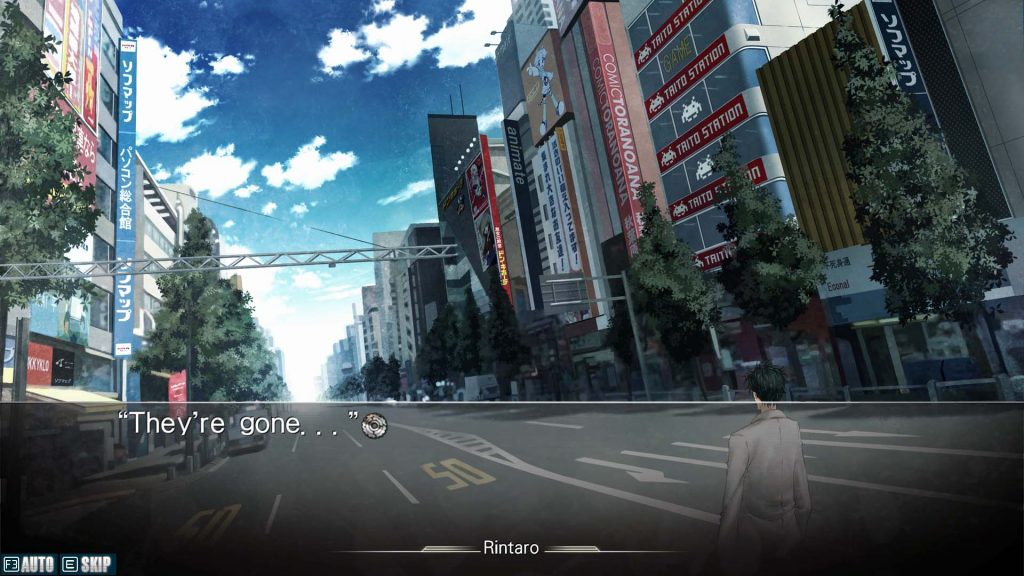 In the beginning, the story seems like an average slice of life visual novel. We follow Okabe as he goes around bothering his friends with delusional rants, dumb arguments and shenanigans. The time travel elements are vaguely hinted at, but they aren’t the focus yet. This can put off people who dislike a slowly progressing plot. Character interactions carry the first half of the game. Okabe and his friends playfully banter with one another, and everything is cute and nice. The game only begins to shine once you’re several hours in when the life or death situations start.

The story is told in first person from Okabe’s point of view. Although the story deals with complicated topics, the writers explain them as simply as possible. Purple prose and long-winded sentences are absent. It’s simple and straight to the point. This makes the game a joy to read.

The tone of the story can flip from light-hearted to deadly serious in a heartbeat. There is a subtle balance, one doesn’t overpower the other. Comedy builds off despair, and vice versa. Individually, there’s nothing impactful about it, but together, they become more than the sum of their parts. 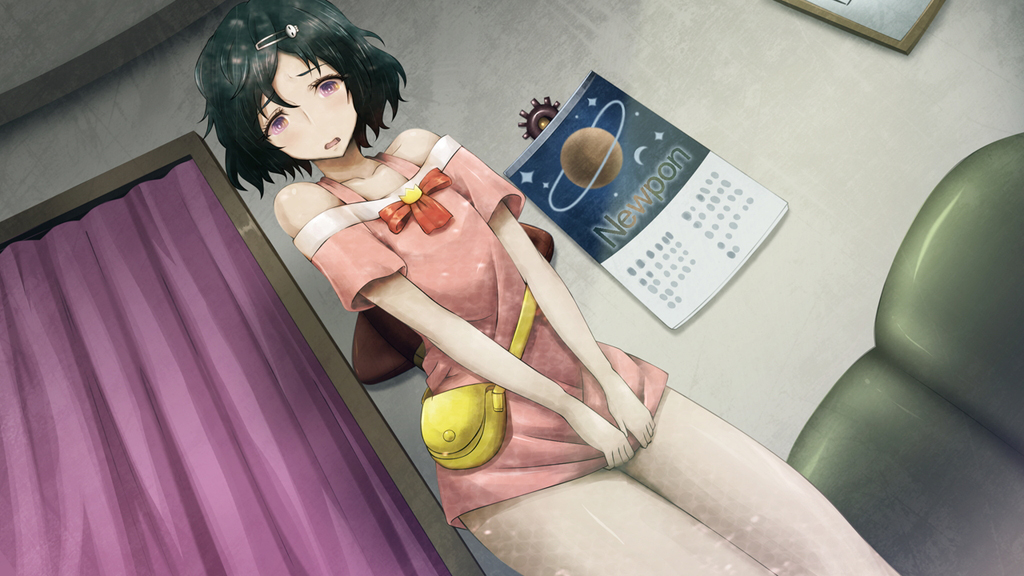 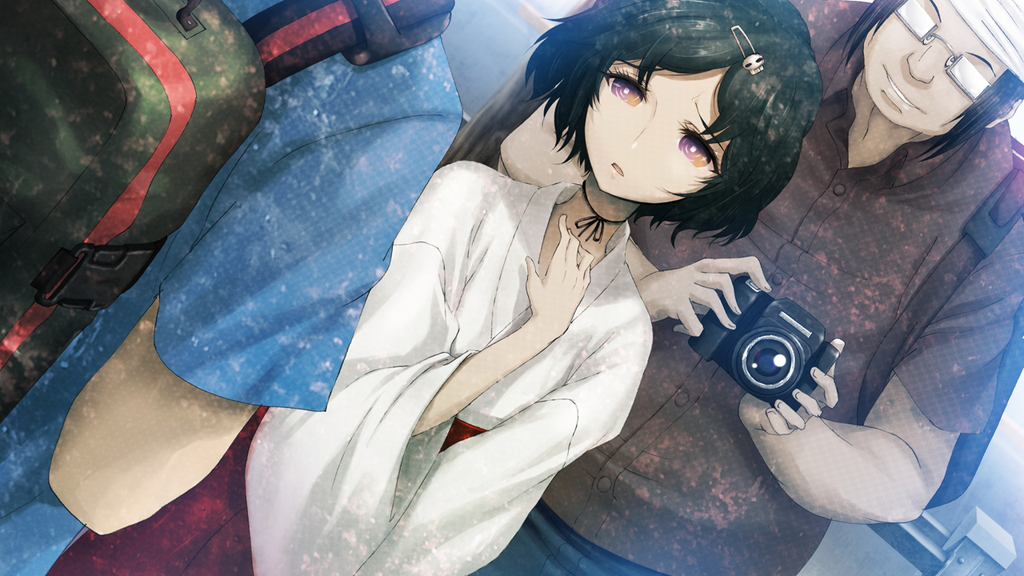 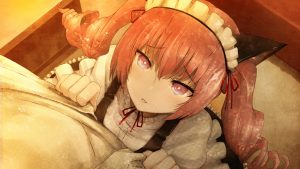 Okabe Rintaro, the protagonist. His ridiculous antics are a source of cringe comedy throughout the story, but he’s not as shallow as she initially seems. He possesses a startling inner strength that helps him to overcome the hardest of obstacles.

Makise Kurisu, a red-haired girl who graduated from university at seventeen. Normally calm and collected, she becomes brash and snarky in Okabe’s presence. She’s the foil to his insanity, constantly providing logical, rational explanations.

Mayuri Shiina, cosplay outfit maker and cat maid. She is ditzy, but kind-hearted. Her likeable personality makes her a pleasure to be around, sort of like a cat cosying up against your side. Her innocence compels those around her to protect her, Okabe being her fiercest defender.

Daru Hashida, an overweight otaku with a perpetual boner for 2D anime women. Despite his occasional perverted tendencies, he is reliable. Daru is also an experienced hacker. Though he doesn’t completely approve of Okabe’s actions, he sticks with him through thick and thin. 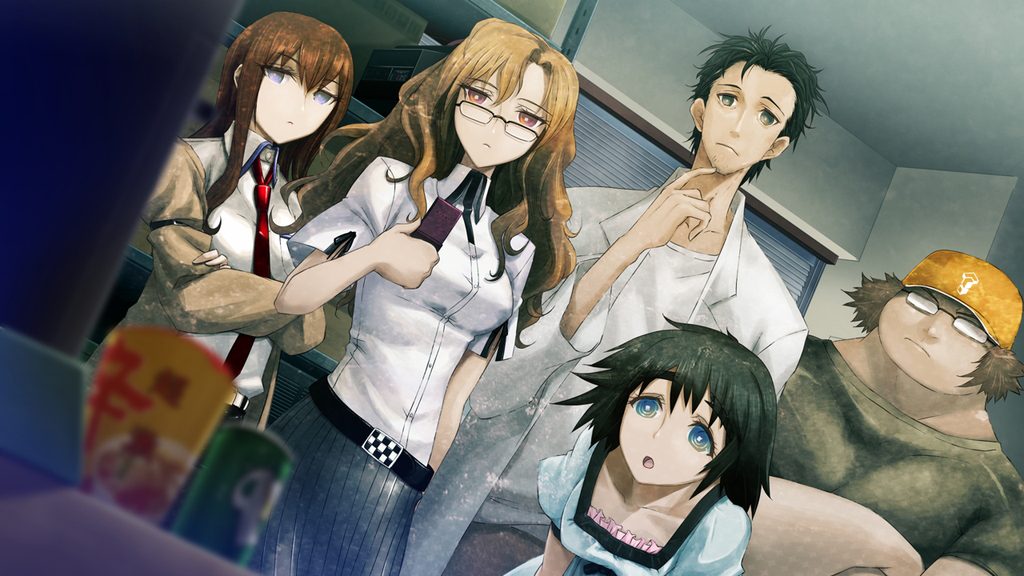 Amane Suzuha, a mysterious part-timer who rocks the braided hairstyle. She’s a quiet but likeable girl, constantly sporting an ensemble made up of sports jackets and tights. She quickly ingratiates herself with Okabe and his friends, but she’s not who they think she is.

Rumino Akiha, known as Faris among her friends. She is the only one able to keep up with Okabe’s delusional nonsense. Cute she may be, underneath the pink-haired maid mask lies a shrewd businesswoman who holds Akihabara in her grip. Faris is also prone to making up fantastical stories to accompany her absurd maid facade.

Finally, Kiryu Moeka, an extremely anti-social and soft-spoken woman who bumps into Okabe at the beginning of the game. She doesn’t speak well and talks in half-bitten off phrases. She might seem like a normal bookworm at a first glance, but this woman is not everything she seems.

Character sprites and CGs are drawn in the same style. Every character looks unique and beautiful in their own way. The art is part of the reason why I could never watch the anime adaptation after playing the game. It’s impossible to go from gorgeously drawn characters, backgrounds, full of colour, to the bland and imprecise colour scheme of the show.

Like their personalities, characters are easily distinguished from one another with just a casual glance. Kurisu has ruby hair and unique clothes, Faris has blindingly pink hair and an outrageous cat maid outfit. Other than their hairstyles, each character has their own discerning outfit. Okabe for example is never without his trademark lab coat. 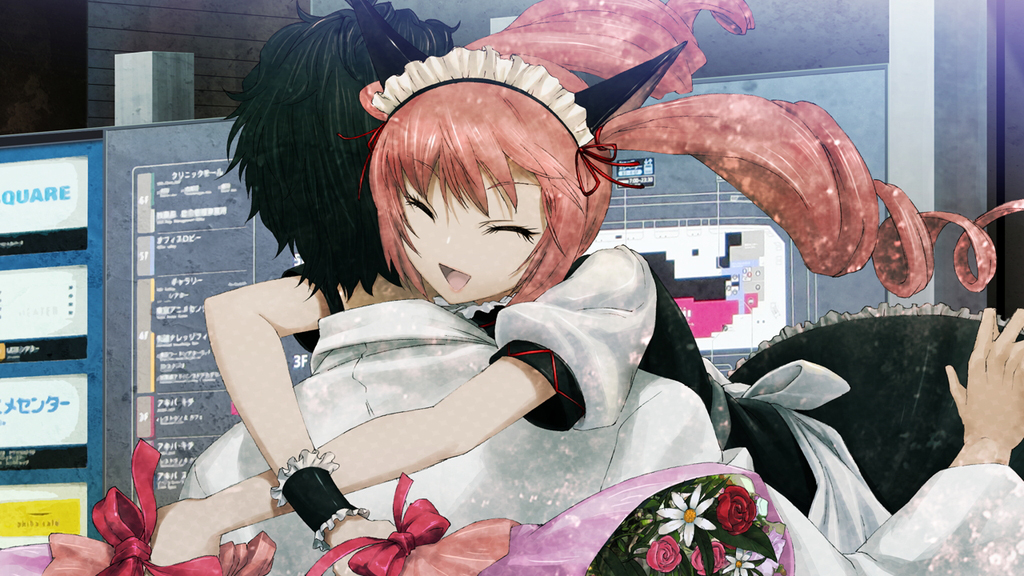 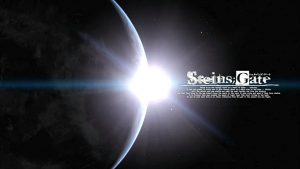 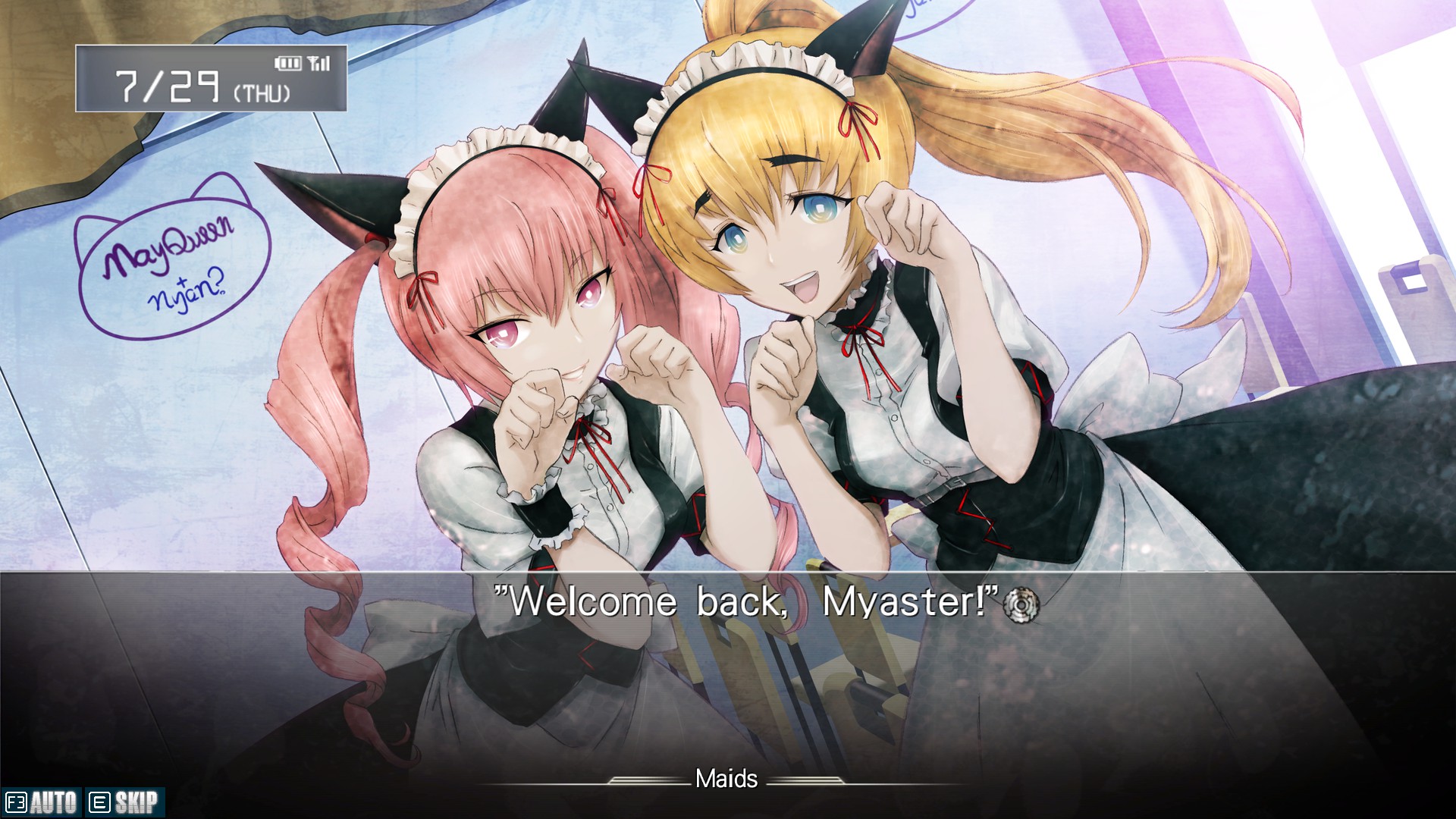 Backgrounds, like the sprites and CGs, are very detaile. Each location has their own flair, managing to be immersive but not drawing attention from the characters. Okabe’s lab is shown to be a comfortable but cluttered space. Random objects are stacked on top of one another, with mismatched decorations hanging from the walls. Each location looks lived in. It feels like the artist captured a screenshot of regular, everyday folk in the middle of their lives.

Shadows are used sparingly. I couldn’t spot them unless it was a close up of an object.

The colour palette is widely varied. Everything has a faint, gem-like sparkle. This makes characters and backgrounds astonishing to look at. Despite this, the colour isn’t overly bright or bombastic.

The sound effects are plentiful and thoughtfully placed. For example, character actions, like pulling open a curtain, result in the sound of metal rings screeching noisily. You get a catchy jingle when Okabe receives a mail on his phone. You can choose your ringtone from half a dozen tunes.

The voice acting is absolutely superb. All dialogue is voiced and every single character sounds fantastic. Okabe’s male voice actor shone the brightest. In emotional scenes, his voice rises to a pitch and cracks at moments where you’d least expect. The voice actor can switch from a happy, playful tone to shock in a heartbeat. 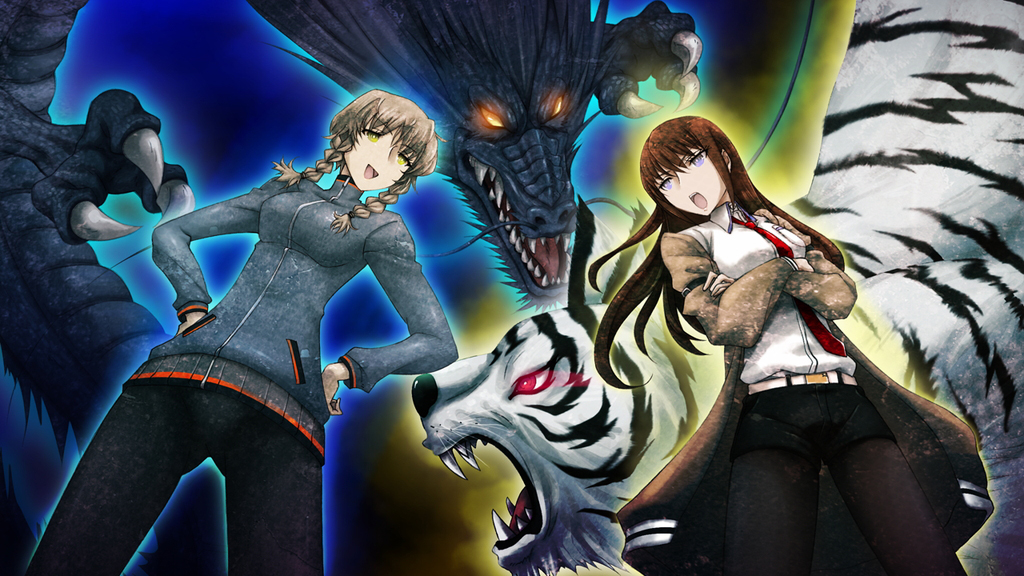 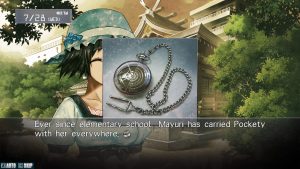 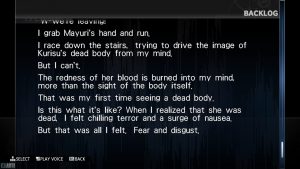 The music ties in heavily to the story, with tracks that evoke the appropriate emotions in their scenes. When you’re first treated to the game’s menu, you’re greeted with a haunting melody. This is by far one of my favourite tracks. The violins and piano gradually build up, the ominous sounds inciting a sense of dread and trepidation. Then, the instruments fade out and are replaced by synthesized music, transforming the tone of the song from melancholic to hopeful.

Cheerful, humorous moments get a bouncy, playful track. The track is mostly synthesized with several flute instruments in the background. The head-bopping beat makes the song sound energetic. Coupled with several joke sound effects, it does well to lift the depressing atmosphere. This song is often used in the first half of the story, which can make it a little repetitive. Thankfully, it is used sparingly and works for the more comedic moments in the game. Contemplative moments get a purely synthesized track, a chorus of beeping sounds to create the atmosphere of mystery. As the song progresses, ominous chimes are added in the background. More and more sound effects come together, blending to become a bastardised reprise of the game’s theme song.

Shocking or disturbing moments get a track that resembles the game’s menu theme. The song stays melancholic and depressing instead of becoming uplifting and hopeful. It resembles desperate cry of someone falling into an abyss. It manages to convey emotion using only a small number of instruments.

Another emotional track that will make you cry buckets plays at crucial decisions Okabe has to make throughout the game. It only has one instrument, the piano. The track isn’t particularly complex, but its simplicity makes it radiate an innocence that grasps your heart. This song will be stuck in your head by the end of the game. Steins;Gate is a visual novel with multiple endings. Clicking the textbox ‘turns’ the page and advances the story. Unlike regular visual novels, it has a Phone Trigger system to determine the ending. Players can receive calls and text messages. Depending on how you reply, it can change the outcome of the game’s plot. This mechanic is a nice change from typical choice scenes in visual novels, your actions can truly make a break a scenario.

While I like the Phone Trigger system, the bad thing is that you won’t see the consequences of your choices until you reach an ending. I recommend going through your first playthrough blind. Once you finish, look up a guide on how to get the rest. Steins;Gate is an absolute gem of a game. If you’re looking to jump into the world of visual novels, I highly recommend you start with this game. If you’re an anime fapper wanting a piece of media that has substance in place of big bouncy boobs, look no further. This game is one of the least sexual experiences of your life, but it will stay with you.