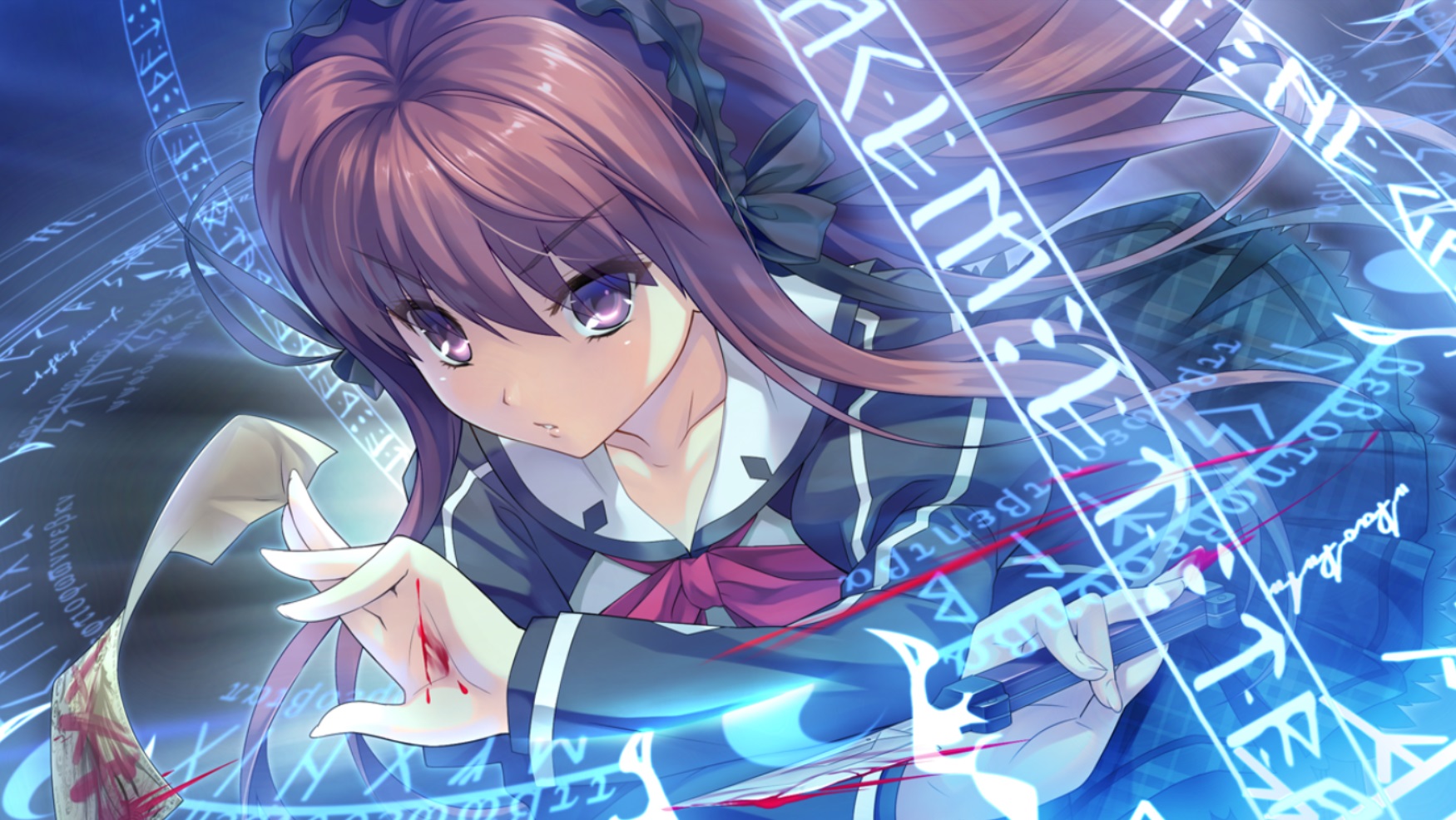 Koga is a handsome young man who has no trouble getting the bitches wet. His sheer aura of male swaggery makes his prospective breeding partners salivate uncontrollably. He is a virtuous man capable of incredible stoicism and self-restraint. He doesn’t take advantage of a single girl despite ample opportunities for non-consensual intercourse. Koga joins a magical boarding school full of mysterious disconnected subplots and hot sluts in multiple realms of existence. 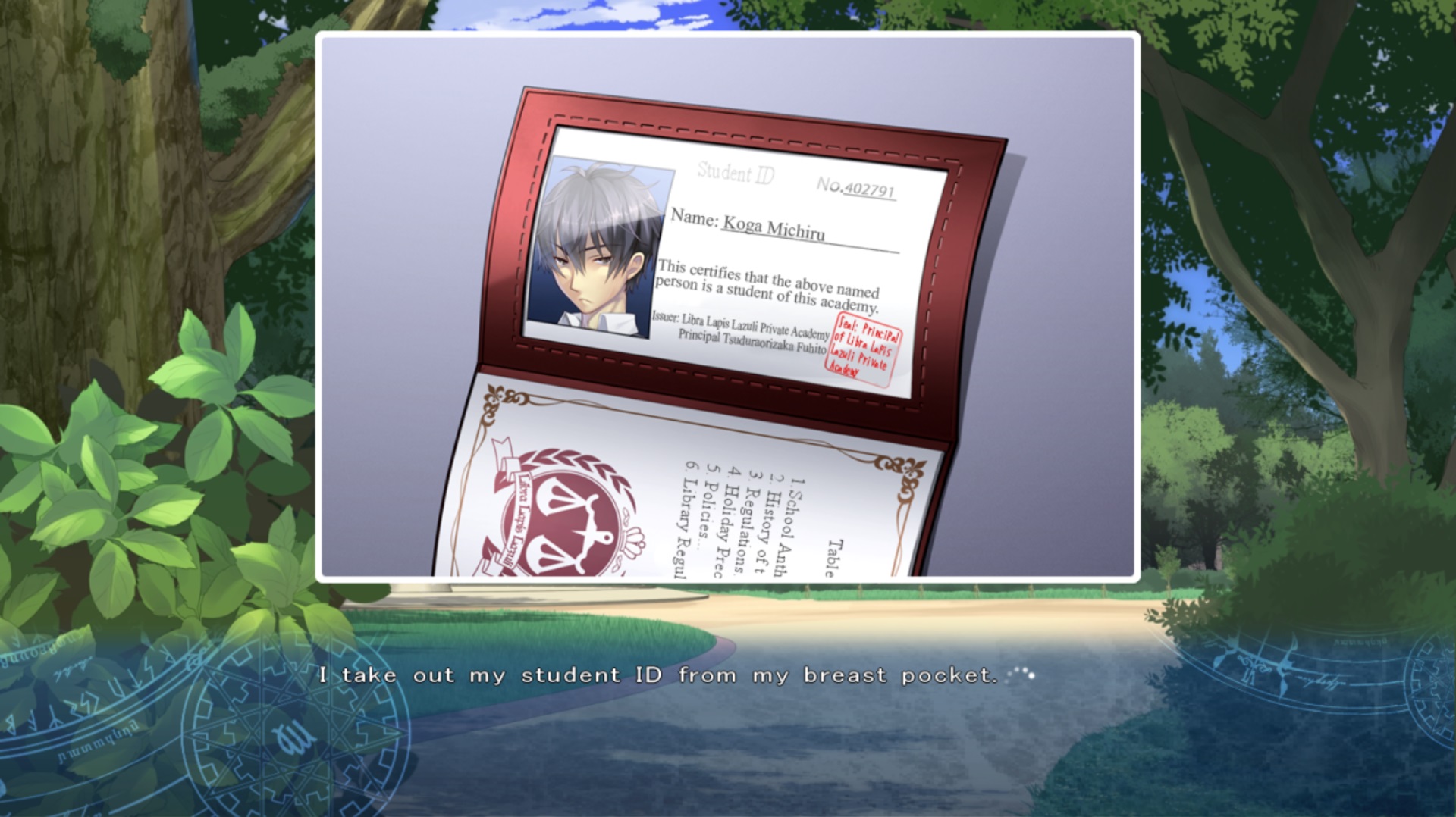 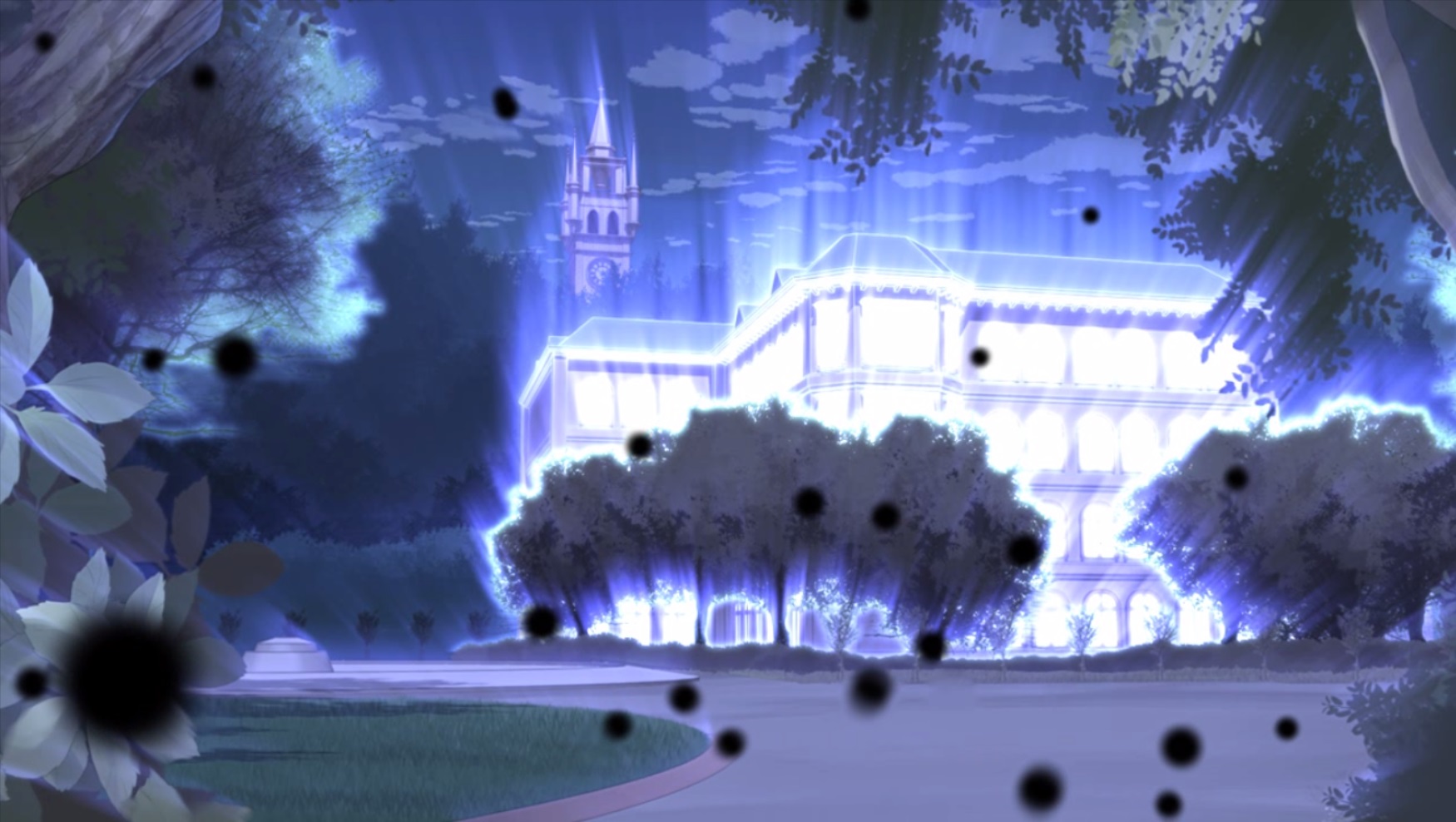 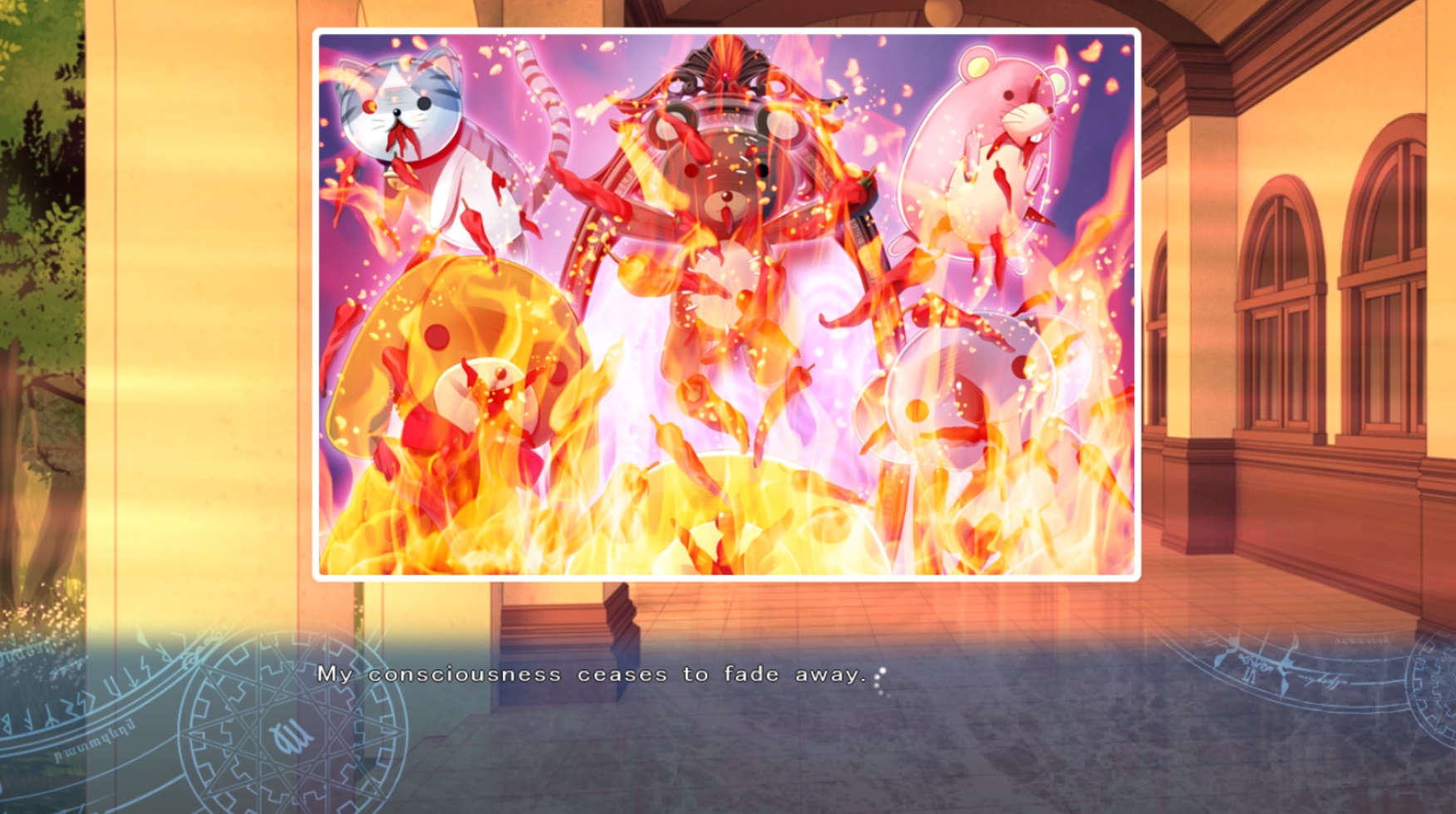 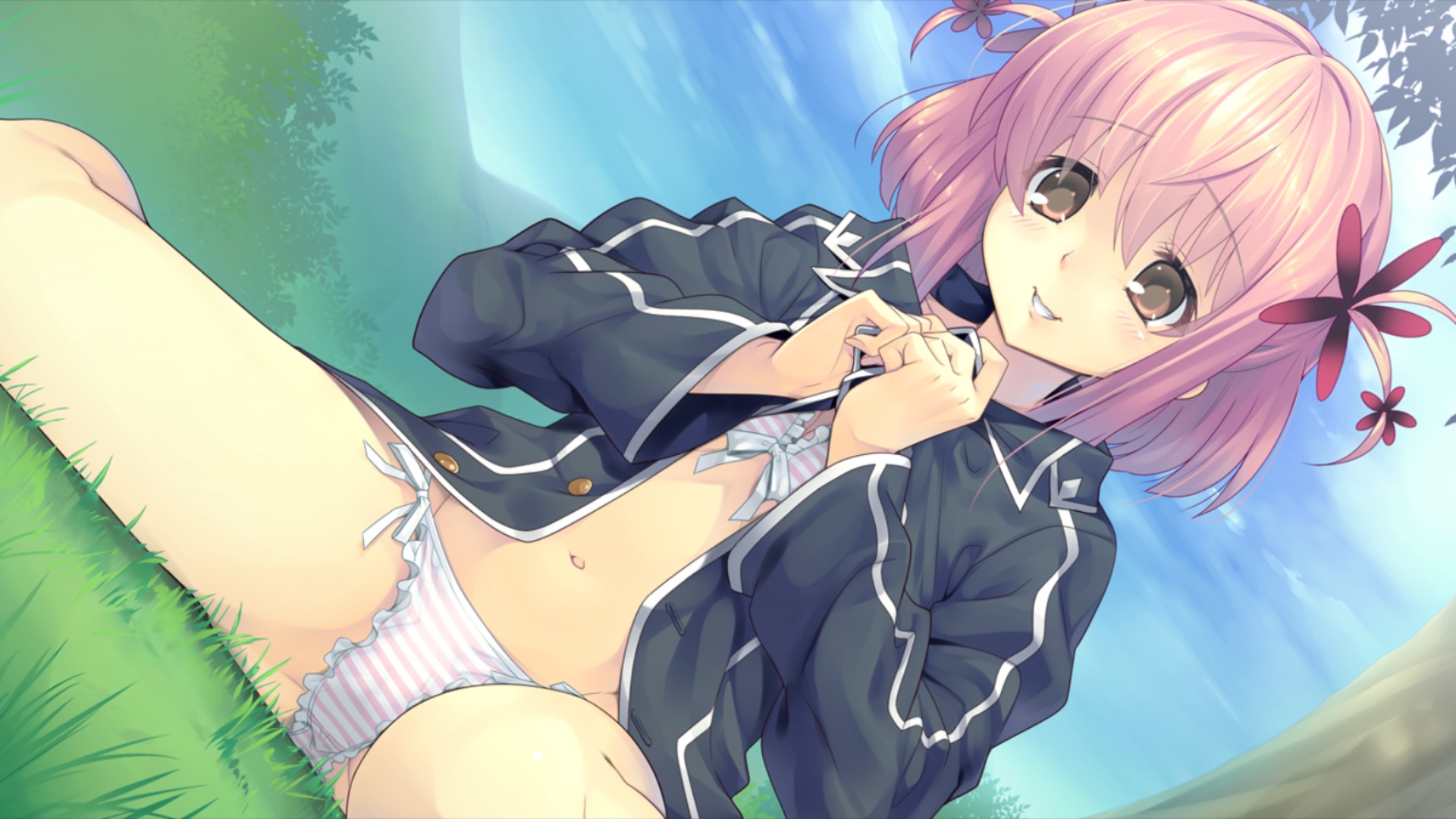 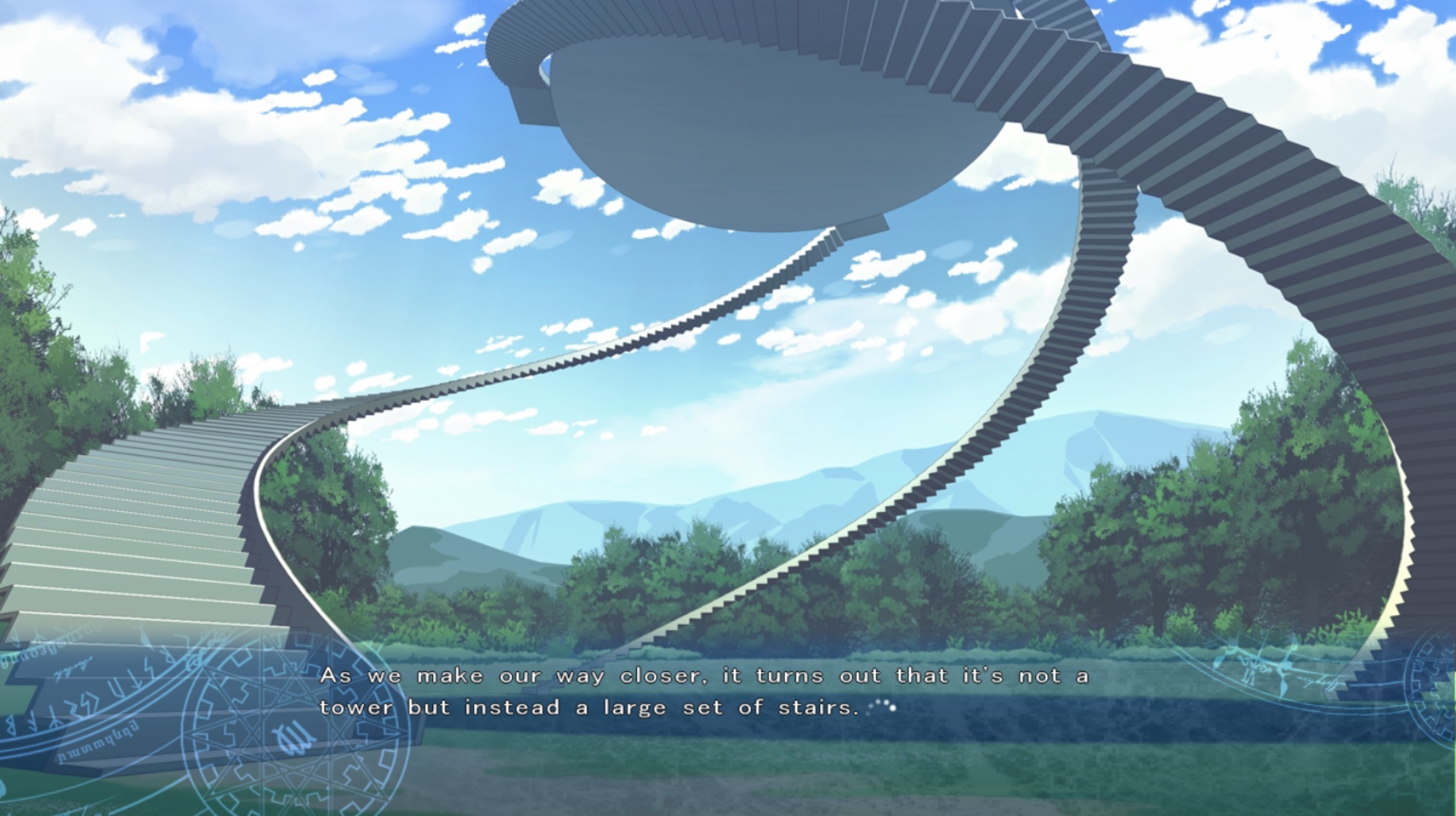 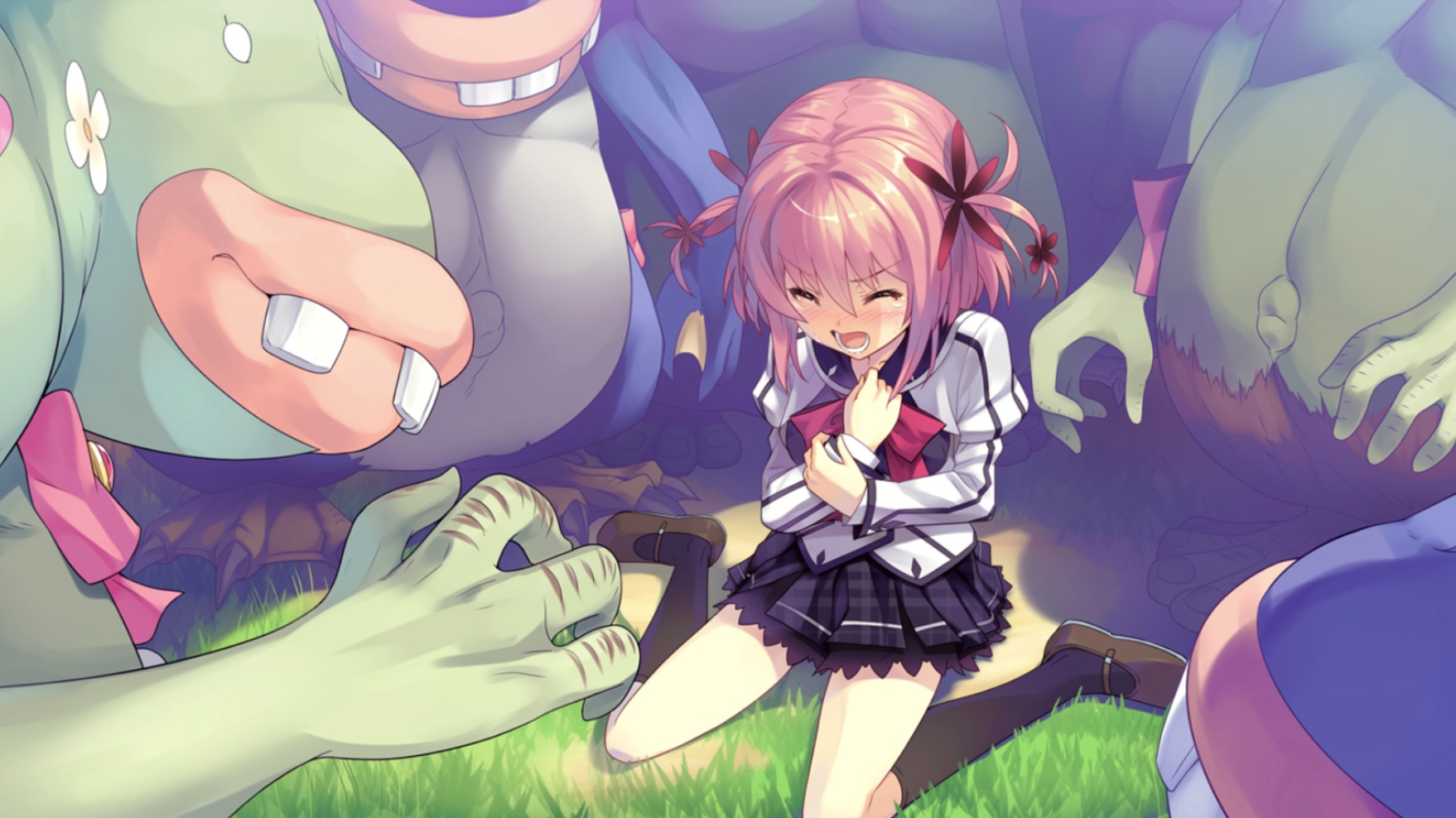 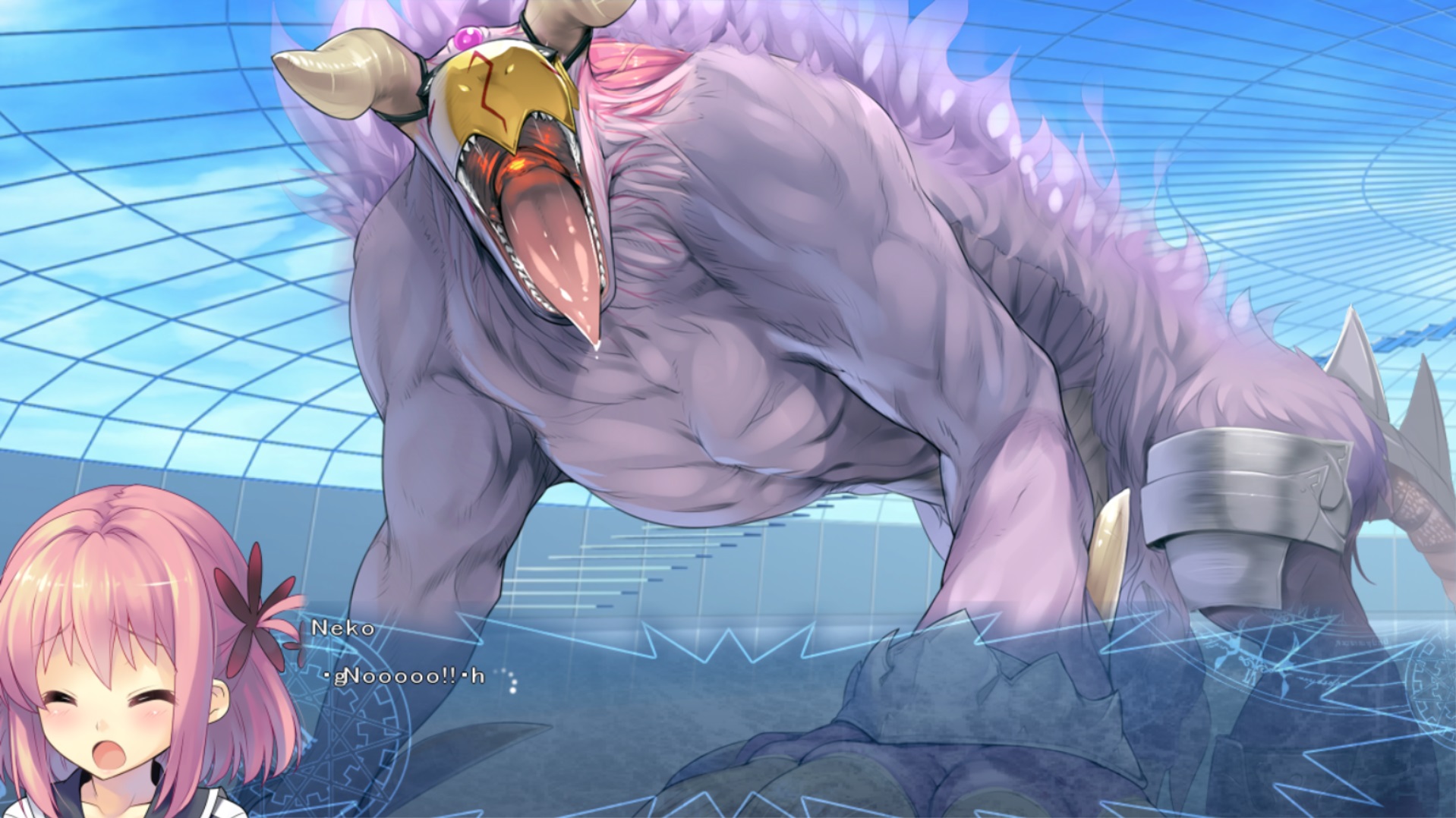 Koga Michiru is a burly hunk who goes to a magical academy. His penis is surrounded by fetish dolls who secretly want his semen. These young fertile anime trope mashups have tiny boobs and forgettable personalities. The most unremarkable girl of the bunch is the generic quiet girl, Ushio. Her long purple hair and petite frame are perfect to grab and pull while grinding that mouth-pussy into a mess. She’s the first girl you see, so she’s obviously the main love interest, were this not a visual novel that lets your dick wander. There’s a bunch of other girls as well, each closer to the age of consent.

The story begins with Koga getting a mysterious package in the mail. Opening the package triggers his post-traumatic stress disorder, which has plagued him ever since his family escaped their poverty-stricken working-class neighborhood. He’s struck by a sudden violent panic attack that triggers a mysterious repressed memory of flapping birds. The hallucination is made stronger by the antidepressants he’s snacking to kill off his violent mood swings. During his time in his urban hell hole, Koga developed an iron psyche that can contain his psychosis with sheer practiced routine. He’s too masculine and diligent of a student to be stumped by a messed up psychological makeup. He stoically ignores his unexplained mental breakdown, never visiting a psychologist. All Koga needs to contain his murderous rage is a little something to pump up the mood. 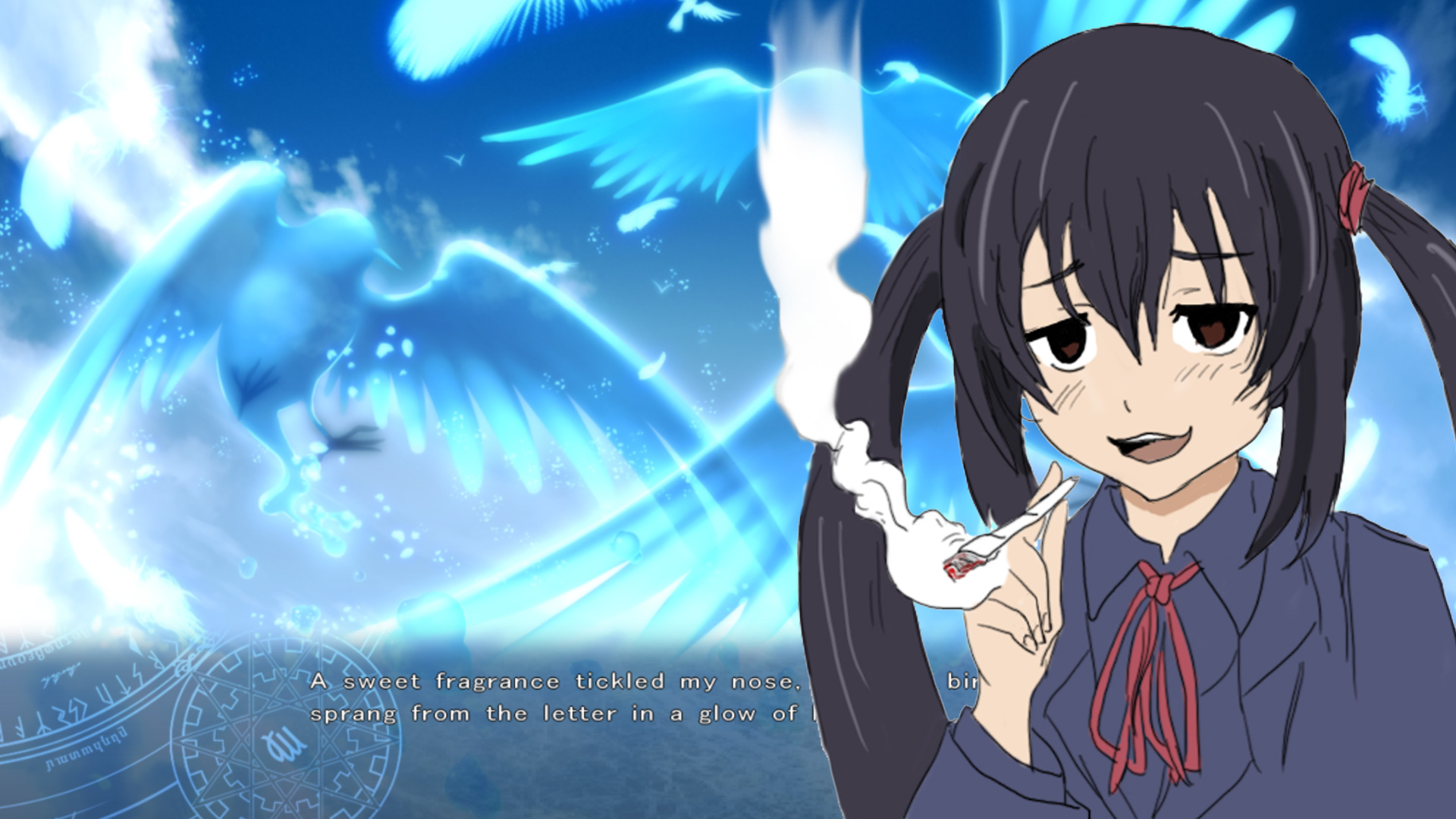 The mysterious package contained a letter of acceptance to a boarding school named Libra Lapis Lazuri Private Academy. Without conducting any investigations into the school’s history, Koga rushes to enroll. The school year starts without so much as a ceremony. Koga quickly learns that this isn’t your normal school at all. The place has no teachers, no janitors, or even a lunch staff. The classes comprise of intense socializing and frequent recesses. Aside from one weird silver-haired girl with creepy red eyes, nobody reads any books.

The story follows logic-breaking dream logic. The characters encounter monsters which turn out to be mirages. They explore rooms that open into worlds that shouldn’t exist. Their school resides in some kind of cross-section between two parallel universes. You would think that a premise this imaginative would lend itself for interesting storytelling opportunities. Instead, it’s like reading a transcript from a board meeting of corporate directors.

If this story was about a bunch of stoner delinquents smoking the latest shit from the street while having invite-only private sex parties in the school’s basement, that would be interesting. Instead, all the characters are the most rule-abiding well-adjusted socially conditioned nerds discussing pedantically about menial incidents of ghosts and fairies causing minor inconveniences to daily routines. There’s no villain, no central philosophical problem, nothing.

Each female character is a mashup of tropes. But the variety is just bad. You got three soft-spoken intellectual semi-introverted girls, and a couple cute air-heads. There’s no sluts, party girls, or bullies causing problems. There’s no real friction between any of the characters. There’s no drama, nothing at stake.

Each chapter starts with a paranormal incident that poses a mystery. The characters then take turns sharing their thoughts about the incident, which takes a long time if you’re actually reading. When the problem gets stress-inducing enough to disturb the girls’ sleep patterns, they device a plan together, which fixes the problem on first try.

The script has oddities. For reasons unknown, almost all sentences start and end with out-of-place letters. Dialog sentences are framed with letters “g” and “h”. 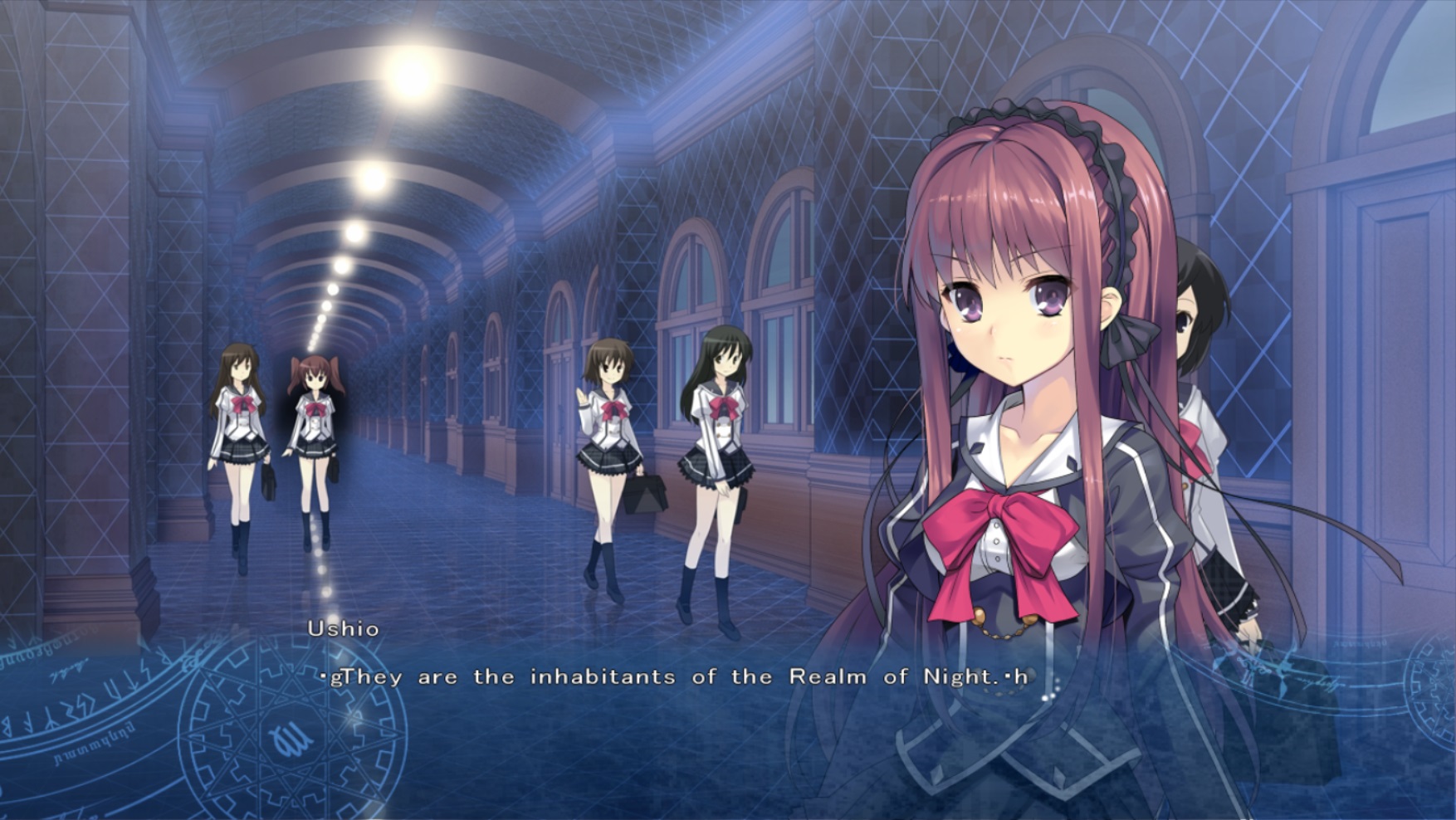 A Clockwork Ley-Line is a visual novel. You click the screen to “turn the pages”. You are prompted with branching choices at random intervals, which can take the story into different directions. The game has a lot of choices. You can save your progress into multiple save slots. There’s 220 save slots, so you won’t ever run out.

There’s so much movement and animation, the game often feels like an anime show rather than a visual novel. The school uniforms are amazingly detailed, as are the hairs, eyes, and the backgrounds the characters stand on. All the little details in the characters’ visual designs makes them joyful to look at. This is pure eye candy, it’s some of the best anime style artwork I’ve seen in years. There’s always more to look at than you can sink your teeth into. The menus have great artwork too. Mysterious occult symbols litter the screen.

There’s also monsters and folklore creatures which look unique and interesting, despite few of them being original conceptions. If the monsters actually posed a physical threat to the characters, which they only sometimes do, the creatures would be quite fearsome. The artwork loses impact when a big muscular monster turns out to be an illusion – and as that pattern repeats, it robs future scenes and the accompanied visuals of their impact. The Japanese voice acting is well done, but some voices are madly annoying. Ushio’s emotionless monotone intonation pissed the shit out of me. It’s amazing that the developers recognized this, and allowed players the option to mute individual characters. Everyone sounds unique and recognizable through their voices alone, but it’s a very standard experience without standout performances. Komaru is the most masculine voice you’ll hear – he actually shouts and expresses anger. Meanwhile your effeminate beta male friend Kotaru is a cute nerd who could use a cock in his bitch mouth. I wanted to punch him every time he started freaking out like a hysterical little girl. Now that’s a textbook zero-testosterone soyboy.

The game has tons of sound effects, each sounding unique and professionally recorded. It’s like the company had their own studio producing these audio clips. It’s very impressive work. You’ll hear the full range of thuds, hits, clothes being shuffled, footsteps, doors creaking. There’s rarely an awkward silent moment where you feel like a noise was missing.

The opening theme is a thrilling mystery song that’s almost chaotic with multiple electronic beats churning in the background. It’s a disjointed but beautiful melody that creates a haunting atmosphere. However, the song plays very often during menial scenes, which destroys its dramatic impact. The other songs are generally slow songs led by an electronic keyboard. While they are composed well, and will be easy to remember after you’re done playing the game, they manage to get annoying very fast when played on a loop. There’s not enough variety in this soundtrack. You’re mostly hearing like five songs alternating on a rather predictable pattern. It doesn’t help that the overall tone of the story is beyond relaxed, so you don’t feel any tension, or anxiety. That contrast ruins some of the otherwise decent songs.

The soundtrack goes through the full spectrum of emotions. There’s a silly song for comedic moments, a lullaby for dialog scenes, an ominous song for when something barely interesting is threatening to wake up the readers. A Clockwork Ley-line is a mind-numbing visual novel written by a neurotic anime-loving introvert with an exceptional attention span for writing deathly boring fiction. The story is lacking all elements of a good drama. The soundtrack gets annoying after only a few minutes of listening. The voice actors are so annoying, I want to physically assault them. The only thing good about this game is the artwork, which is wasted in this lackluster context. This game is terrible overpriced garbage that only passes as entertainment for people suffering from the most severe case of anime autism.