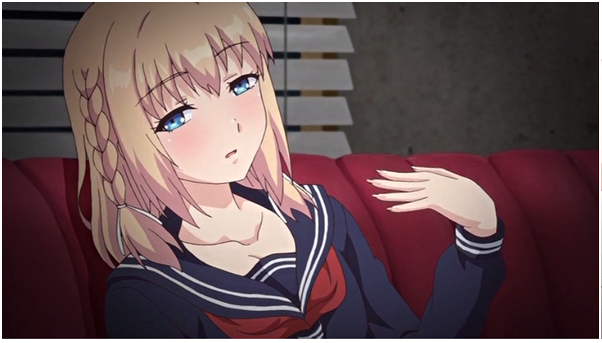 Rinka, an ordinary high-schooler, runs away from home and settles to live with her attractive uncle (who doesn’t seem to have a first name) and much to his reluctance, makes herself right at home. A simple request for juice leads Uncle to find an old vial of super-duper-pussy-opening aphrodisiac spray that make women want dick more than oxygen. Not quite sure how he forgot he had such a magnificent item in his possession, but it doesn’t take long for him to use the spray on Rinka.

Uncle is madly in love with Rinka’s mother, his brother’s wife. But because he was too young at the time of their first meeting, Uncle couldn’t act upon his feelings. However, since Rinka looks so much like her mother, fucking daughter is kind of like fucking the mother, right?

Once the aphrodisiac kicks in, Uncle goes to town on Rinka. There’s some over the sweater pussy playing and breast squeezing building up to the intercourse. The first sex scene between them is very rapey with Rinka resisting and protesting until Uncle jams his dick in her throat.

After he gives her good dose of vitamin-D, Rinka passes out, but the fun doesn’t stop there. She wakes up later to secret videos of her parents having sex playing and we learn that Rinka has a daddy fetish. After she gets herself off, Uncle reminds her he’s still in the room and pops one in her virgin pussy and takes her missionary style. She protests all the way until she pictures Uncle as her papa and rolls with it. We’re treated to a montage of positions and end with Rinka coming to her senses the morning after looking for the ‘pill’. Uncle has some, but if she wants them she’ll have to do what he says from now on.

The animation quality is good. It’s light on colour, there’s a lot of realistic grey colors in the environments. It fits the mood as this is a story about sexual abuse. You can argue that the coloring symbolizes the immorality of the scenario – just because she enjoys the sex doesn’t make it okay to drug your niece.

What is noticeable is the inconsistency in how Rinka’s figure is portrayed. There’s a particular scene where we see her (clothed) chest. In that shot she’s flat as a board, but the moment her shirt is lifted, those bouncing beauties bob into place, making you wonder where Rinka was hiding them.

The series also makes occasional use of certain 3D objects such as doors and couches which add that strange allure of 3D and 2D assets melded together. The studio’s budget was clearly strained, as the doors revert to choppy-looking 2D in the wide shots.

There is a good scene towards the beginning of the episode that highlights Rinka’s attractiveness in an array of panning shots, focusing on various aspects of her body. This is from the point of view of her uncle, who can’t help but see her as an adult, even picturing her naked and commenting on how much she looks like her mother.

I really enjoyed listening to Rinka’s voice actress. She has such an innocent, youthful voice full of soul – when she isn’t getting her ass fucked into submission. But when she is fucked into submission, her young moans awaken a deep perversion within the audience, a perversion I relished as I watched the poor girl getting filled up. There is nothing quite like the sound of that momentary gasp when an anime character wants to protest only for a penis to suddenly clog up that mouth.

There is little in the way of memorable music in the series. The opening theme is replaced with a simple title card that explains what you’re about to watch. Even within the confines of the episode, the music never stands out, making not the slightest impression on the viewer. While the lack of music kind of fits the gloomy, realistic style of the anime, I would’ve very much liked a soundtrack to listen to.

Let’s recap the premise: Rinka is an innocent school girl who gets taken advantage of by her uncle. The uncle love her mother and forces himself on his niece because she bears a strong resemblance to her mother. Not only that, but when you think about the fact that this is basically incest with a minor (that still has the proportions of a typical anime girl) who, prior to the start of the series trusted you completely to take of her, it’s easy to be put off by a title like Ore ga Kanojo o Okasu Wake.

You can watch this anime at several shady streaming sites. I recommend watching the episodes at Hentaistream, or Hentaiplus.