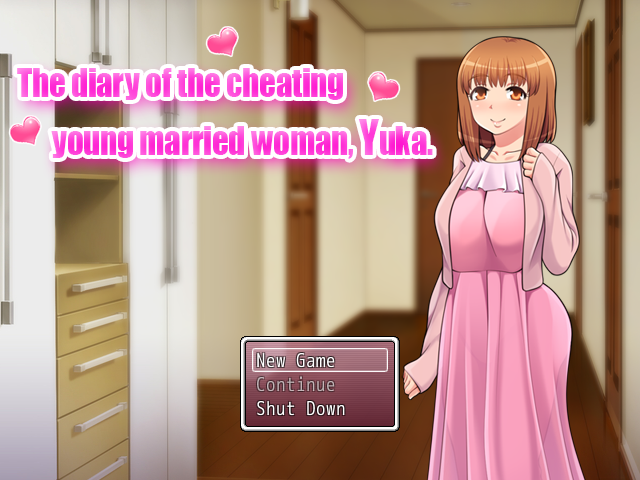 Yuka has been casually cheating on her husband for a long time. Now that she and her husband start seriously trying to make a baby, she’s at a turning point in her life. Can she finally commit fully to her husband, and drop her affairs?

Yuka has been married for two years, and it’s finally time for the couple to make babies together! Will she remain faithful and carry her husband’s child? Or will she cheat and bear another man’s seed?

There are four men to have sex with. They are the husband, the next door neighbor, the businessman, and your boss at work. Each has unique dialogue to explore, but doing so may lock you out from other routes.

There are four endings to the game, dependent on your sex partner and which stat you max out.

Maxing out suspicion will lead to the “poor whore” ending where you starve on the street, forced into prostitution.

Maxing out pregnancy will lead to the cuckolded husband ending where you give birth to another man’s child.

Maxing out satisfaction will lead to the happy ending where you become faithful to your husband.

There is little to say regarding an overall plotline. Simply max out a stat and unlock the ending.

Cheating Wife Yuka was created with RPG Maker. Movement is controlled with your keyboard’s arrows keys. Press Z to interact with people and objects. Press CTRL to skip dialogue.

The game cycle is a unique spin on money management sims. You earn money by completing jobs or selling your crops. Jobs that involve cheating on your husband will pay extra. Selling crops is done by speaking to the grocer on the left from your home. Crops must be planted the night before using potted soil and seeds. Both can be purchased from the grocer. These crops and paychecks can be used to cook meals at home and pay for lessons from the cooking school. Meals can be given to your husband, or others to advance your romance.

The three stats in the game are suspicion, pregnancy, and satisfaction. In the english translation, satisfaction is called “circularity”. Satisfaction rises as you please your husband. Suspicion and pregnancy rise as you cheat on him. Refusing to make your husband breakfast, or constantly asking your husband for money, will raise suspicion and lower satisfaction. There are numerous other features to this game such as a day and night cycle, and the meal preference system for the husband, but none of them matter.

All of this sounds interesting until you realize the game is incredibly buggy. For example, you see a red screen effect in the recollection room, and your husband disappears from the game entirely. This game is broken, and even unbalanced. Almost all players will receive the “faithful wife” or the “poor whore” ending. The pregnancy stat rises incredibly slowly, and the other two stats rise quickly. The game ensures you’re either faithful, or starve on the streets, which is not very fun.

The art is Japanese anime style, with soft lines and rounded edges all across the canvas.

There are a total of six CGs in this game. For such a long game, this is completely unacceptable. You grind for long periods of time trying to reach a goal, only to see a repeated image for the hundredth time. It’s not very satisfying.

Even though the visuals are limited, they are of very high quality. For example, there’s a scene where Yuka says she always takes off her wedding ring before cheating sex, and it’s reflected in the artwork. What a shameless slut!

The in-game sprite work is also high quality. Yuka can only cross busy streets at crosswalks, and is able to move diagonally across the map with ease. These are all great features, even if they are overshadowed by the lack of CGs.

The sound effects in this title are mostly standard RPG Maker assets, but each is used in an unexpected way. For example, picking up vegetables plays the applause sound effect. The audio feedback encourages you to do more farming.

Sex scenes have light moaning sound effects, but they loop frequently. Still, a sexy lady moaning is better than silence!

The soundtrack has 47 songs in total, the vast majority of which are unused stock clips. In truth, there are only four unique songs that play throughout most of the game.

Piano mixed with the harp and violins creates such an angelic melody, that it doesn’t even feel like a cheating wife game. It feels more like the end of a grand adventure, and doesn’t fit the tone of the story. The music may be unique, but it is out of place!

The game has 19 sex scenes, spread out over 6 basic CGs.

Cheating Wife Yuka has an enticing demo that features sex stats and glossy CGs, but the actual game is a buggy, unbalanced mess. Thank God the recollection room and all scenes are available from the start!

Male Prostitution Game Review: I am a Prostitute