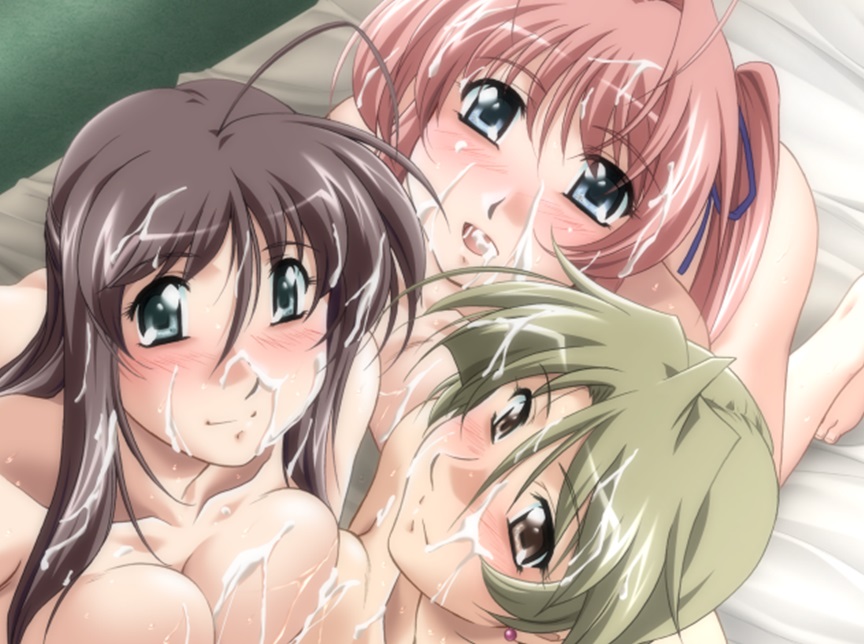 Kouta Koikawa spends his days daydreaming about his social studies professor, Chieri Hase. But he can’t confess his feelings because he is a student and she is a teacher; until one fateful day when he falls over and accidentally shoots his load all over her.

Kouta has the hots for his teacher Chieri. He even reads porn novels with characters that share her name. His grades are slipping because he can’t stop thinking about sticking his dick in Cherry’s pussy. One day he trips and falls on Cherry, blasting his load through his pants and covering her in his lust juices. Embarrassed and unsure how to respond, Cherry decides to take responsibility and help Kouta relieve his sexual tension. She starts giving him handjobs, blows his cock clean, and offers him her pussy, all the while keeping their budding sexual relationship a secret from everyone at school!

Kouta’s classmate Kyoka is also making moves on Kouta. She starts getting suspicious when she sees him basking in post-orgasm afterglow. Kouta’s perverted best friend also gets in on the action while Cherry’s colleague Mamiko regrets her decision to ship Kouta and Cherry together when she realizes just how much she needs her sperm donations in her pussy bank.

The game takes 10-30 hours to complete. There is a good deal of content to explore with multiple endings available. The plot is interesting, and features tons of juicy sexual scenarios. Scenes don’t just exist to set up the next sex scene. You have tons of interaction between characters that builds their relationships in between the constant fucking.

The writing is excellent and there are no grammatical errors I could find.

Kouta Koikawa is an attentive high school student whose grades have been slipping because of his distracting obsession with her social studies teacher. He has a healthy libido but no pussy to pump his loads in. He feels conflicted about his desire for a relationship with Miss Cherry, whose reputation could be ruined if he initiated a sexual relationship with her.

Chiery “Cherry” Hase is a novice social studies professor who is extremely shy. You have to wonder how somebody as shy and clumsy as her ever managed to get the job. While she is good looking, most people can’t see past her tits and glasses. She is very compassionate and decides to take responsibility for Kouta’s sexual problems.

Kyoka Yorri is Kouta’s classmate and an honor student from a wealthy family. She is secretly in love with Kouta but too embarrassed to spit it out. She has a generic visual design but sports the best facial expressions.

The game has almost no sound effects at all.

The music in Amorous Professor Cherry is excellent. The soundtrack takes you back to the early 2000s. The variety is good, and all songs fit the scenes they play in. Music is composed primarily using the keyboard and guitar. The music is synthetic, but it’s not a detractor.

There is a good balance between upbeat and cheerful songs. There are also some soft and intimate tunes. Musical changeovers are noticeable but not distracting. Songs loop continuously until the scene changes. Tracks have a repeating beat, but somehow that doesn’t make them feel repetitive to the point of annoyance.

There are also extra options which allow you to play any song from the soundtrack while you browse the menu.

The anime style art is excellent quality. There are numerous CGs during sex scenes that make every encounter feel unique and fresh. Because this game was originally released in 2004, most of the art mimics the anime style of that time. It looks grainy in both the colour and texture department. Background images have enough detail to make them stand out and evoke emotions.

There is artwork for a lot of different locations. Details include small text on posters in the background. The teacher’s lounge area is peppered with a lot of incredibly small and detailed objects. Overall, there’s a lot to feast your eyes on.

The CG gallery is reminiscent of Clannad. CGs have little evolution in-between artwork but every sex scene contains more than one CG artwork to showcase sex position changes, or changeovers from oral to vaginal sex. Characters have limited facial expressions.

The characters’ bodily proportions stay consistent in-between scenes. Lighting and shading are especially noticeable since the game was made in the early 2000s. Edges are light and colours look faded.

The sex is average with good dialogue but lacks the necessary level of emotional intimacy needed to make her scenes feel like she’s more than just a token fuckdoll. The game focuses most of its attention on Cherry. The harem element is unneeded.

You can download this game at JAST USA’s digital storefront.