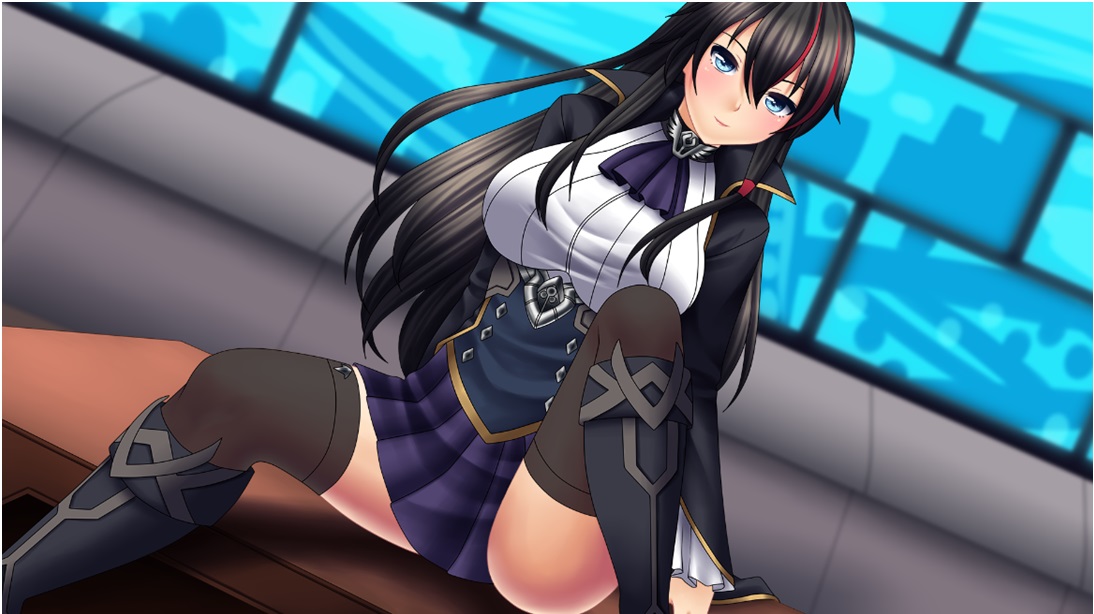 Shizume lives in Echo Tokyo, a futuristic cyberpunk version of Tokyo. There is no law here, only survival. It’s a hard life when you can’t find work to pay next month’s rent. Shizume gets her big break when she’s offered to investigate a crime at a shady casino.  Little does she know that taking on this case will test more than just her detective skills!

Shizume is a fixer, a person who solves other people’s problems at a price. Unfortunately for Shizume, her land lord is threatening to throw her out if she can’t come up with last month’s rent. Relutantly, she takes on a gig to investigate a crime at a shady casino downtown. She soon finds herself in a situation where her manager ‘Daedelus Dark’ fondles her titties. Shocking!

A week later Shizume is sucking Daedelus’ cock like a proper whore. He offers her more money if she can find the traitor in his business. Shizume agrees since she doesn’t want to spend her life on all fours with dicks in her pussy.

Shizume’s character design is cute, but there is a lot of room for improvement. She never comes across as sexy.

Echo Tokyo Phoenix has no voice acting and no sound effects.

The music selection is hit and miss. The soundtrack consists of a wide variety of synthetic instruments that befit the cyberpunk setting perfectly. Real instruments are utilized. You hear a cute drum beats and electric guitar.

Each song has a unique electric beat and rhythm that fits the scene it’s used in. There are several fast-paced songs that play when the stakes are high, or Shizume is involved in a fight. Most of the music has a casual flow, almost like it’s building up to something. It draws you into the mystery Shizume is investigating. The music overall is fine and not distracting.

If you do not like heavily synthesized musical scores in your games, several songs here will frustrate you. Song changeovers are subtle and do not distract you while playing. A track will loop when the song ends.

Songs featured during sex scenes do not add to the intimate atmosphere. Music does not build up to the eventual climax.

Echo Tokyo Phoenix is a visual novel game. Clicking the textbox advances the story. Functionality features are normal to other visual novel games with a ‘skip’ and ‘auto’ button for smooth play. From time to time, you are presented with choices that branch the story. Most of these branches result in a bad ending. There are more than enough save slots available.

The game runs without glitches or hiccups.

The art style is hit and miss. There are 24 CGs available.

The main menu design is praiseworthy. It has unique fonts, a neat art style, and a lively colour scheme that makes the game come alive even before you start playing.

The world is beautifully designed with vibrant and highly detailed backgrounds showcasing the best in cyberpunk art. The attention to detail in crafting Echo Tokyo’s world is spectacular and makes me wish that the developer would’ve spent half as much time crafting better sex scenes or just adding more than two character sprites to their game.

Character sprites are very limited to Shizume and Dark. There are sprites for other characters, but these are one-off appearances. Shizume and Dark’s designs feel bland and uninteresting to look at with limited facial expressions. Shizume is clothed most of the time and when she’s not, the camera hides her boobs. Her pussy is never seen.

Most of the CGs in the game are not sexual. The artwork featured in the h-scenes is poor, with the least appealing camera angles imaginable. Images have almost no variants. You never see Shizume getting creampied, or putting a dick in her mouth. Her lewd facial expressions are also very limited, but they do look cute when she wears them.

The sexual content in Echo Tokyo Phoenix is non-existent. The game contains very few sex scenes, which rely heavily on dialogue and descriptive writing. The writing for these scenes is basic, and the scenes are criminally short.

The game cleverly hides Shizume’s body when she is having sex, obstructing it with the male body or using camera angles that focus on her lewd facial expressions instead of her tits or pussy. The game is also unwilling to animate Shizume holding or sucking an actual cock, leaving the space empty and up to the player’s imagination.

Echo Tokyo: Phoenix is pure deception. Players are tricked into thinking this game will help them rub one out, when really it’s just a video game parallel for that one girlfriend in college who always teased you about wanting you fuck her but never letting you.

You can find and download Echo Tokyo Phoenix at Nutaku.net.

[Comic] My Life With You – Art Only