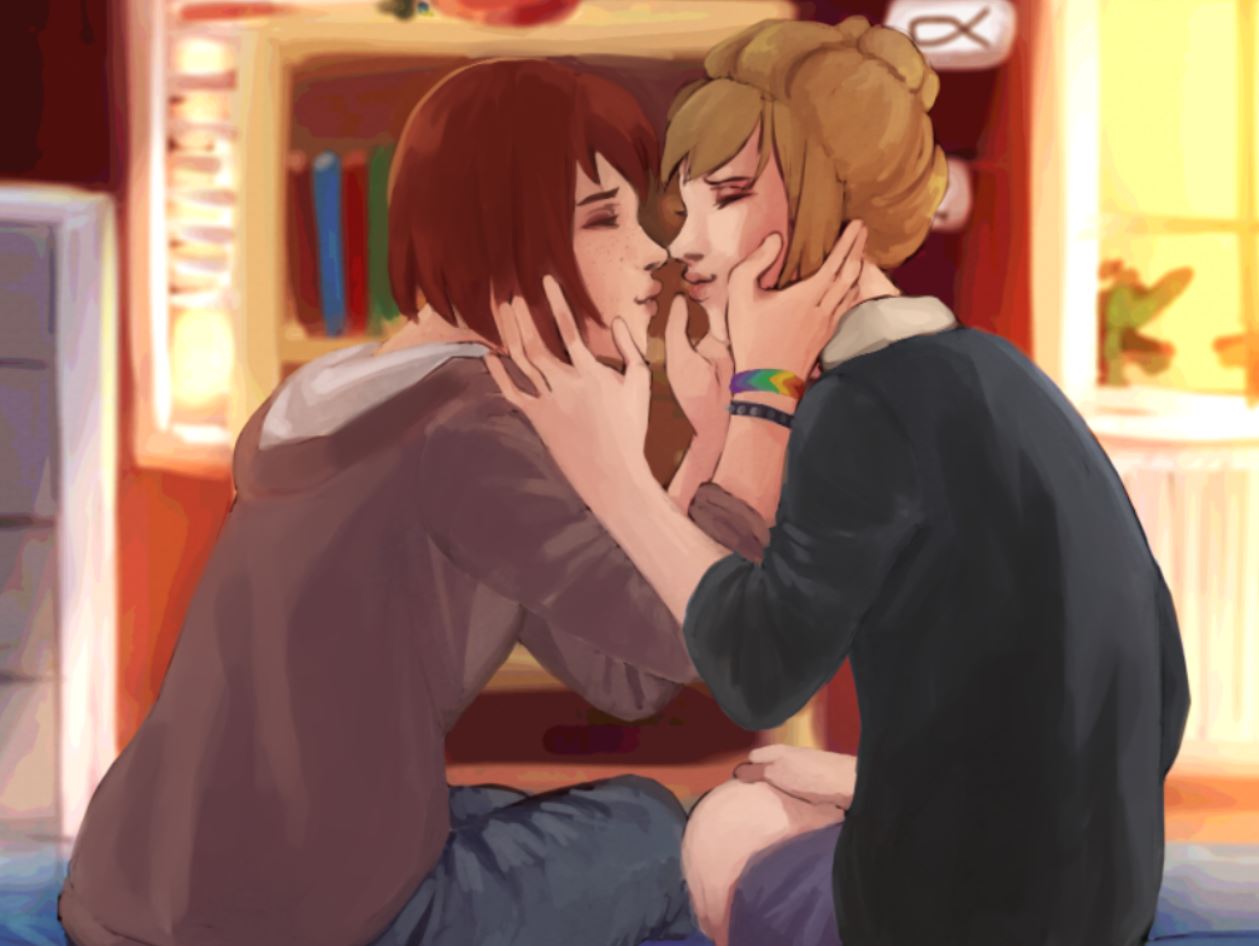 Love is Strange, a fan-made lesbian visual novel developed and published by Team Rumblebee. Released on January 4, 2016. Download on itch.io for free. Available for PC Windows, Mac OS and Linux. No voice acting. No sex scenes.

Head back to Arcadia Bay and experience the gay romances that could have been. Play as Max Caulfield in this fan game of Life Is Strange. Armed with your trusty polaroid and innate ability to create sexual tension, choose from four hotties and bag yourself a girlfriend!

Love Is Strange puts you in the shoes of Max Caulfield, resident hipster and budding photographer. Instead of tracking down a missing girl and uncovering twisted secrets that will leave you emotionally wrecked, all Max needs to do is find the right model for the upcoming photography contest. She navigates the treacherous minefield of teenage romance, while trying to capture the perfect photo.

Max can strike up a partnership with four girls, representing four routes. Each girl has their own unique storyline, all of them ridiculously well-written. Despite being fan-made, the game stays true to its characters, working in memorable events from the original game, like Kate Marsh’s bullying and Victoria’s closeted anime obsession.

The game features completely original storylines, which means new players can enjoy Love is Strange with minimal knowledge of its source material. I recommend at least reading up on the events of the original game to understand the origins of the four romanceable characters. Meanwhile, returning fans expect to be tickled pink by inside jokes and read how Max loves pussy.

Each route will take more or less two or more hours to complete, so savour them while they last. I enjoyed Rachel Amber’s route the most. Reading how Max, the shy geek, charmed her way into the heart of Blackwell Academy’s most popular girl, was mind-numbingly romantic. It’s amazing how well they complement each other in Love is Strange.

Max Caulfield is a talented photographer who favours hoodies and graphic shirts. Underneath her introverted persona is a kind person who doesn’t hesitate to heap affection on people she cares about. Love is Strange is played from her point of view.

Chloe Price is the blue-haired punk with a brash exterior. Though she might project an air of aloofness, she’s a sensitive soul. Despite that, it doesn’t stop her from getting up to whacky shenanigans with her two best friends, Max and Rachel.

Rachel Amber is the most popular girl at Blackwell Academy. She brims with life, familiar with everyone and everything happening in Arcadia Bay. People idolize her and believe she’s going to accomplish amazing things.

Kate Marsh is a quiet and kind girl and one of Max’s friends. She takes her religion seriously, and catches flak for it from the rowdier students at Blackwell. She has a knack for art and regularly volunteers at a hospital.

Victoria Chase is the self-proclaimed Queen of Blackwell. If you cross her path and offend her, prepare to be mutilated by cutting insults and a nasty mean girl sneer. With a bad reputation for being a mega bitch, Victoria has more enemies than friends.

Love is Strange uses a realistic western artstyle with a painted aesthetic, heavily reminiscent of the original game. It suits the game perfectly, giving it a dreamy and immersive atmosphere. If an official visual novel of the game was ever created, this is what it’d look like.

The art looks like it was done with soft strokes of a paintbrush: It’s blurry and vague while showing enough details to be eye-catching. Players can revisit familiar areas within Blackwell Academy, or new areas like shopping districts outside of Arcadia Bay. Similar to the art, the colour palette is made up of warm colours that befit the game’s romantic premise.

If there’s one downside, it’s that the unlockable CGs are drawn in a different art style than the character models. For my first run, I reached the tipping point in Max’s romance with Rachel. The image that popped up surprised me with its abstract oil-painted style.

The visual novel has no voice acting.

There are minor sound effects that work to create an immersive atmosphere. Despite lacking variety, they are well-placed and draw attention to important actions when needed. Examples include the slam of a car door, the chatter of people on the boardwalk and so on.

Like the art, the music is perfectly suited for this game. I am in love with the soundtrack. It complements the light-hearted stories with relaxing jazz and lofi type bops. The four romanceable characters all have their own theme songs, which amplifies certain aspects of their personalities. You truly feel like each route is unique.

Love is Strange is a visual novel with branching choices. Each route has three different endings. Clicking the textbox advances the story. It has the usual functionalities of visual novels, including the ability to reread past dialogue with your mouse scroll wheel.

In addition, the game also has a couple of nice quality-of-life features you won’t find in other visual novels. Similar to the original game it’s based on, it has a diary belonging to Max which continuously updates as the story progresses. Players can also unlock ‘Achieves,’ which are in-game achievements that function as humorous little throwbacks.

The user interface is also fantastic. In addition to being slick and easy to navigate, it’s filled with quirky throwbacks, like save slots in the form of polaroid photos. The high production quality of this game is astounding.

Love is Strange is exactly what you need to feed your desire for adorable lesbians. For a visual novel of this calibre, it’s a crime that you can get it for free. Featuring lovable characters, entertaining writing, scrumptious art and music, I recommend it heartily.

Incredible yuri adventure for LIS fans. Download this on itch.io for free.