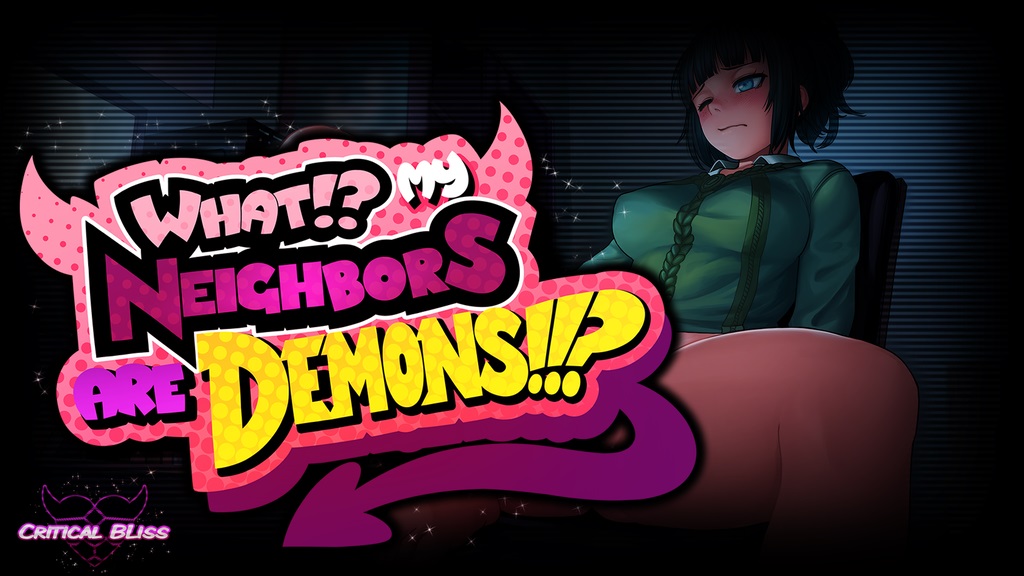 Poor Selene can’t catch a break in her life. Things only get worse when her life is uprooted by two demon siblings who stop by to turn her from a well-mannered girl into a helpless bisexual slut addicted to their love juices.

Currently, the game only has a demo version which can be completed in two hours, but shows a lot of promise. The game focuses a lot on corruption and moral degeneration. It’s uniquely written in the past tense and features almost no spelling or grammar errors. The writing is filled with lots of cute villainous flirting and lewd sentences.

My Neighbors Are Demons has a bunch of sound effects that make the game feel more realistic. You can expect to hear thuds associated with falling onto the ground, record scratching for comedic effects, intense heart beats, magical summoning, pussy squelching and dick sucking noises. Meanwhile, the game has no voice acting at this stage.

The music in My Neighbors Are Demons feels unending. Songs have a jazzy vibe to them with saxophone playing. Other instruments used include traditional wind instruments, drums, keyboard and the guitar. Musical changeovers are undetectable. The songs put you in a relaxed state as you watch Selene being dominated. Some of the songs rely too heavily on repetitive beats but never feel intrusive.

My Neighbors are Demons is a visual novel game. You click the screen to “turn the page”.  The game has basic VN functionality with no save slots and no gallery. There is an ‘auto’ and ‘skip’ option available. The demo version released has very few choices.

My Neighbors Are Demons stands out in the graphics department. The game is ongoing with its Kickstarter recently held in may but we can already see the level of detail that’s going into making this title.

Words you typically associate with moans and groans flash across the screen periodically in big pink letters. Certain backgrounds are animated such as the lovey-dovey CGs which feature floating hearts. The game uses a lot of zoom-ins and character close-ups without a drop in quality.

Cevi and Vulse’s eyes glow bright pink on occasion. Some artworks depict the characters as super deformed cartoons with thick edge lines. The result looks like it was lifted from a parody comic book. The CGs have basic enough details with realistic proportions and a chocolaty color scheme.

Artwork in the game evolves depending on what happens in the scene. Expect variations in cock placement, body placement, facial expressions and cum and eye color. Sometimes the artwork will show an X-ray version of Selene being face fucked. The artwork will jerk side to side to simulate real-life cock sucking. Artwork will rotate and fly around to simulate confusion or dizziness. Character designs for Vulce and Cevi’s sprite look ugly with disjointed bodily proportions and weirdly crafted faces. It’s a good thing most of the demo feature them as ominous shadowy outlines. Backgrounds have rich detail but are severely limited.

Throughout the game you hear Selene breathing heavily as she tries to hold in her growing sexual desire. The sex is made more exciting by forcing you to make the lesser of two sadistic choices that ends with your pussy stuffed with dick cream.

The more Selene gets fucked, the hornier she becomes. Sex scenes are really lengthy and intimate with detailed play by play commentary to boost the lewdness. The game is extra raunchy by giving you the opportunity to watch Vulce and Cevi play with each other when Selene is too tired to let them pound her love canal.

My Neighbors Are Demons is a very promising adult game with several unique things going for it. The artwork and music are great if you ignore character designs. The story promises to be a fun and sexy one. Consider supporting the producer on Patreon and pray we will someday experience a full length version of this. Give the creator a slap of dollars, so that he can perhaps finally overcome his perfectionist tendencies and get it into his thick skull that some corners have to be cut to complete an actual product.

Recommended for one-handed gamers around the world. Download What?! My Neighbors Are Demons!