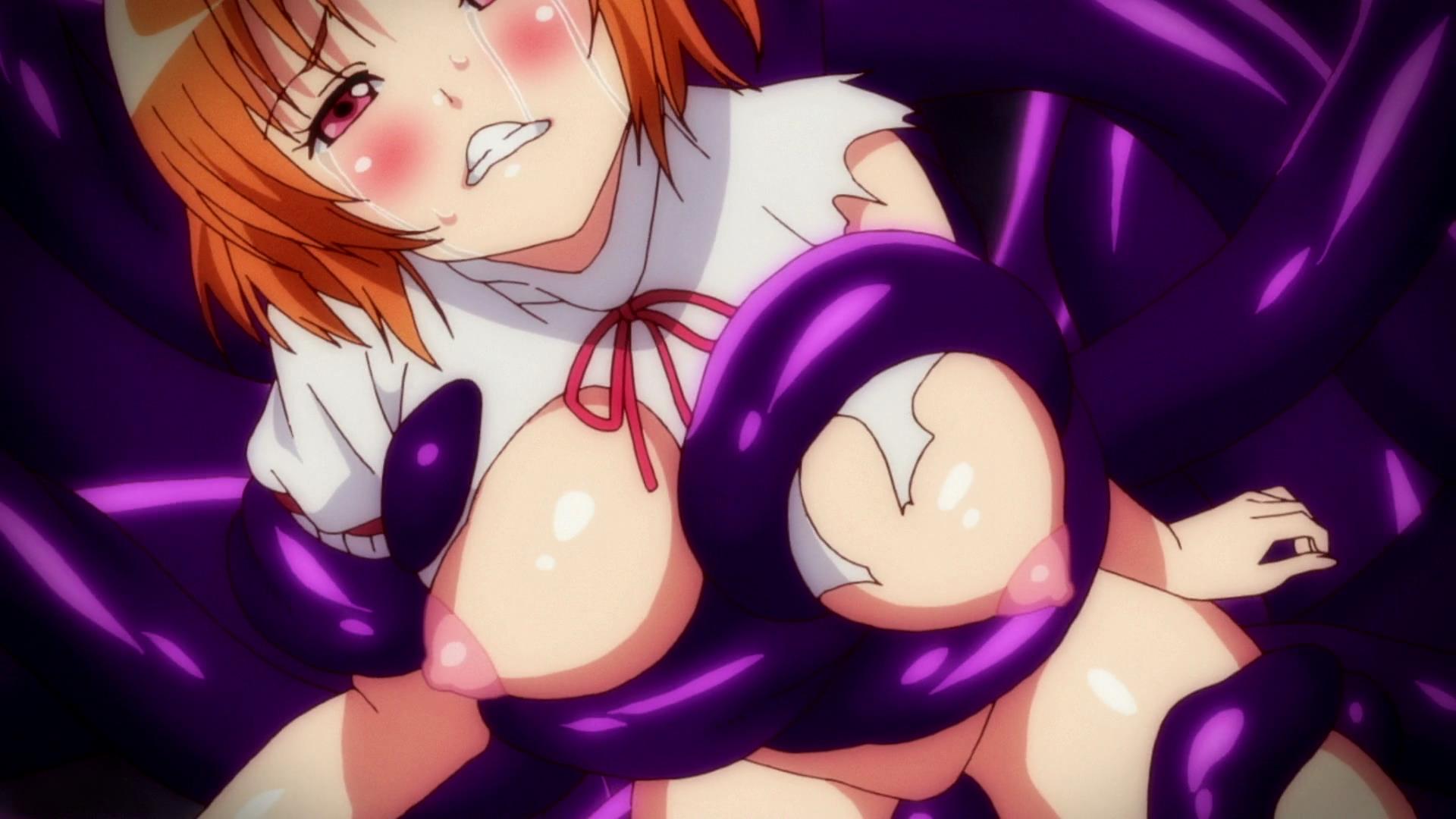 The only other scene is a yuri one between Yachika and Mia. Yachika seduces Mia in the bath by playing with her boobs and making fun of her. The scene is not only sexually satisfying, but also emotionally enjoyable as Yachika monologues about why she is so in love with Mia. Yachika kisses Mia and begins rubbing her pussy against her partner’s leg, all the while playing with her body.

The group are split up when a strange statue breaks and creates a crater in the room. Homura, Mia and Yachika explore more of the manor and happen upon a strange book which summons the tentacle monster from before. They flee after witnessing it kill one of Professor Yamanobe’s colleagues. They hide in an empty room. Homura stands guard when he meets a mysterious girl, Yuki, who tells him to head to a nearby section of the manor. On route, he receives a call from Kippei despite the episode stating there is no phone service. He hears Rikana being gangbanged by an excited Kippei and a confident Domon.

The episode does a fantastic job setting up its character pieces. Homura is the generic anime protagonist in search of his father, Mia is innocent and incorruptible, Rikana is unfazed by what is happening in front of her, Domon is a cocky asshole while Kippei comes across as the plucky comic relief. Yachika gets the most development in this first episode. She initially comes across as arrogant and a bossy loudmouth, but we learn that she harbors a secret lesbian crush on Mia.

The production team outdid themselves with the soundtrack. The entire episode is littered with great, atmospheric music. The tracks vary between being steadily unsettling to downright ominous. Original instruments like the organ and various other choir music blast the eerily uncertain feeling this episode leaves you with. This horror anime makes you doubt whether any of the characters will make it out alive. The songs are unique and memorable. Their placement throughout this episode is spot on and deserve praise for how much they add to the overall suspenseful atmosphere.

The animation quality is magnificent. The production values throughout this episode are amazing. The deep, clear visuals look spectacular in 1080p. The color scheme for the characters is bright and vibrant while the backgrounds are dark.

There is a lot of blood and gore in this episode. It’s animated well. Certain scenes feature 3D CGI. These scenes are scarce but very noticeable compared to the rest of the animation. The camera explores a lot of different angles. A certain point the camera is tracking the characters from above which is difficult to draw. During sex, the camera will zoom in on female bodies, so we can gawp at how soft and plump their forms are.

The quality of the voice over work is hit or miss. I enjoyed Domon, Yachika and Mia’s performances while Homura and Rikana felt flat and generic. Both of Mia’s corruption scenes sound sexy. Her moans are cute and lewd and make you wanna do all sorts of nasty things to her.

This episode has a lot of sound effects that make the anime feel more realistic. You can hear statues breaking, phones ringing, water flowing, lock picking, footsteps, the earth caving in, various magical sounds like spell casting and demonic summoning. The clips are high quality, no cracks or pops.

This anime is some of the best fap material I’ve watched in ages. The only thing I am disappointed with is that a year has passed, and we still haven’t gotten a second episode. The stellar production values and key mysteries introduced in this first episode would make it a shame if there was no follow-up on what happens next. Abaddon: Princess of Decay is definitely worth checking out!

I highly recommend you check out this anime. You can find it in many places, including at HentaiHaven.