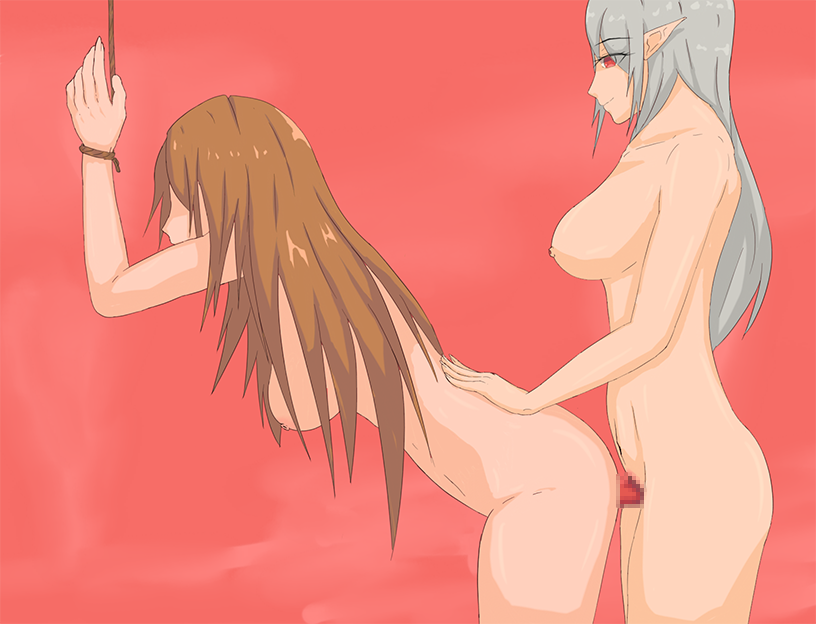 Revenge of the Elf 2, a conquest game developed by ST Hot Dog King. Released December 16, 2020. Download on DLSite for $7.00. For PC Windows. No voice acting. Censored genitals. Available in English and Japanese.

Humanity has wiped out the elven race! There’s only one elf left, Ashe! Filled with demon energy and a drive for revenge, Ashe vows to destroy the human race! She will fuck and kill everything on her path to power!

Five years ago the human empire invaded the God island and stole the Earth Gem. The gem was split into eight parts. Each was given to an elite division of the human army. During the events of the game, the sole survivor of the elven race, Ashe, allies herself with wrathful plant demons. Using their power, she can consume human bodies and souls. There is lots of unavoidable vore in this game.

As an open-world strategy game, players can progress at their own pace. Some will want to maniacally slaughter every single village on the map, others will go directly for the eight shards. There aren’t a lot of characters in the game. Outside of Ashe’s brainwashed secretary and plant partner, Leech, no character is named or developed. You don’t play this game for its story.

Revenge of the Elf 2 was created in RPG Maker MV. As a simulation and army management game created in an RPG engine, you can expect to experience numerous game crashes, so save often!

The game is built on a core loop of upgrading your army and attacking towns or villages. There are no romances or NPCs to converse with. After a couple of hours even the most patient of gamers will find this repetitive.

Upgrading your army requires various resources. Souls are gained by consuming your enemies in combat. Semen is gained through sexual actions in combat. Gold and trade goods are gained via factories and other structures. These structures are kept running by farms and mines.

Despite sounding complicated, the game basically runs itself. All you need to do is stockpile resources and use them on character upgrades. For example, the ability to vore your opponents more frequently. Semen is used to produce soldiers. Soldiers consume food over time. This encourages you to keep pillaging towns to finance your growing army. A side goal is to unlock all sex acts via upgrades since you only start out with the power to give folks handjobs.

The art is a simplified version of the Japanese anime style. Stock assets from the RPG Maker library are used throughout the game. Even enemy sprites and NPC enemies are taken directly from the stock library.

There are 20 CGs in total. All images can be found in a single playthrough. Ashe fucks her opponents in different ways by gaining new abilities. You can find all 20 CGs in one play session.

Ashe never wears unique clothing. Her sprite design is boring. The lack of creativity and originality holds this game back from true greatness. Ashe wants revenge, she does nothing else with her life.

Revenge of the Elf 2 has no voice acting.

The sound effects are stock assets from the RPG Maker Library. Sword slashes are nice enough at first, but after so many hours of playtime, they just become tedious and annoying. Doing the bare minimum in sound design is a huge disappointment.

There are 21 tracks in total. All files come from the RPG Maker library. “Town 1” and “Battle 3” are nice, but they’ve been used in a million other games. The lack of an original soundtrack means you’ll likely mute this game shortly after you start playing.

There is no virgin route. Sex and vore are built into this game as your primary method of collecting semen. While this is hot at first, the recycled images eventually leave you with a less enjoyable experience overall.

To build your army, Ashe becomes a futanari and impregnates female captives with her seed. To capture souls, Ashe consumes human beings via her demon tail or asshole. Yes, she will literally shove men inside of her anus to capture their souls. Don’t kink-shame her.

The lack of dialogue, no varied sex positions, no animations hold this game back. If you want to see Ashe being dominated in a piledriver or prone-bone position, you’re in for disappointment.