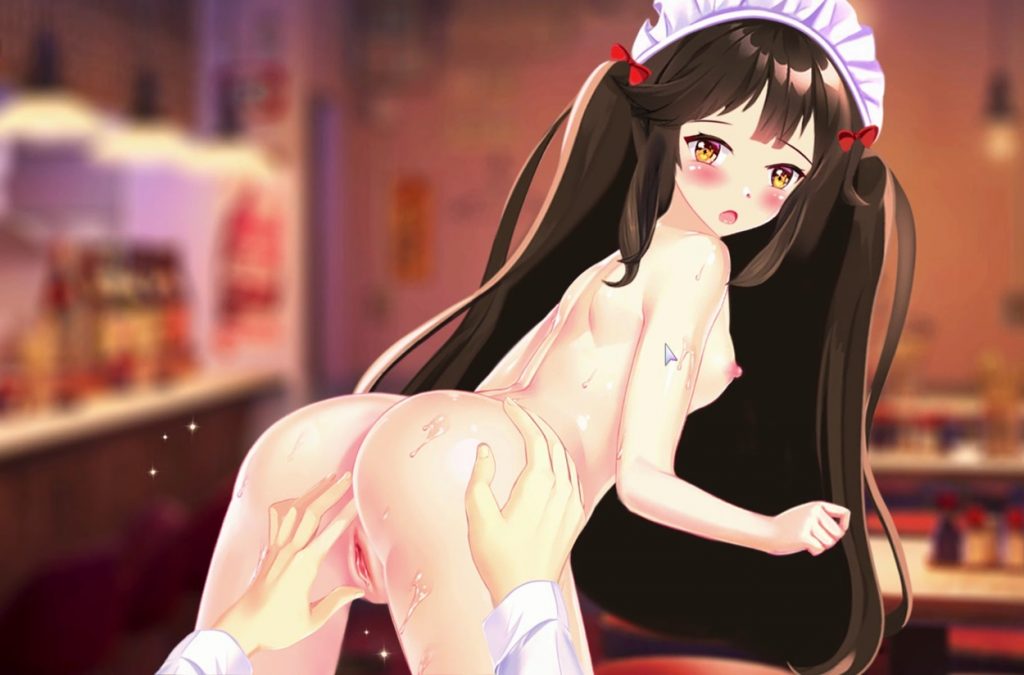 Sweet Bottom Pie is a short puzzle game. You play as a nameless customer who enters a cute little maid café. You order a cake but find the waitress who serves you even more delicious. You forget about the cake and seduce the poor girl. Once she has submitted to pleasuring your cock, you have unprotected sex with her and leave her behind drenched in your man juice – a classic pump and dump. The game is devoid of text. The plot is inferred through the use of imagery.

Sweet Bottom Pie is a puzzle game. You progress through the story by matching tiles. There are nine stages to play. At the start of each stage, a board of different tiles will flash onscreen. You have to memorize their locations and pair them up two at a time.

Once the board has been cleared, you move on to the next stage. Every time you clear a board, another CG is unlocked. Tile images include cherries, milkshakes, cakes, pastries and other common items found in a maid café. You can clear stages immediately by pressing the Control + F keys together. This is cheating, it robs the game of all the build-up and the fun. I don’t know why the developer allowed this feature in their game, I feel it goes too far.

Other sound effects that you can hear throughout the game include flipping tiles up and down, penis thrusting and pussy squelching noises and some alerts for victory and failure.

Sweet Bottom Pie uses original instruments like the saxophone, drum sticks, tambourine, and electric guitar to soothe you while you wrack your brain trying to solve the puzzles. The soundtrack is comprised of a handful of songs. Tracks blend into one another after a short time, hence the low score.

There is little variety with every track being a slow, intimate number designed to help the player concentrate while creating a friendly atmosphere. You can tell a lot of effort went into crafting the soundtrack. I just wish there were more songs to choose from.

I enjoyed the sex in Sweet Bottom Pie more so than other Pen in Apple titles. The waitress comes by to serve you some cake but you have a different dessert in mind. She looks cute so you immediately get to work checking her out. You charm her by feeding her a cherry while prepping on popping hers in a few minutes.

The lack of voice over and onscreen text doesn’t hurt this title as much as the others in the series. The CGs do a good job of telling the story for you. If you have a good imagination, filling in the gaps will be very sexy. The sex itself is paint by the numbers. The romp is fun but not very creative. You don’t get to eat cake off the waitress or stuff some vanilla icing sugar down her ass to lick out later. Moments like these would’ve made this experience far raunchier.