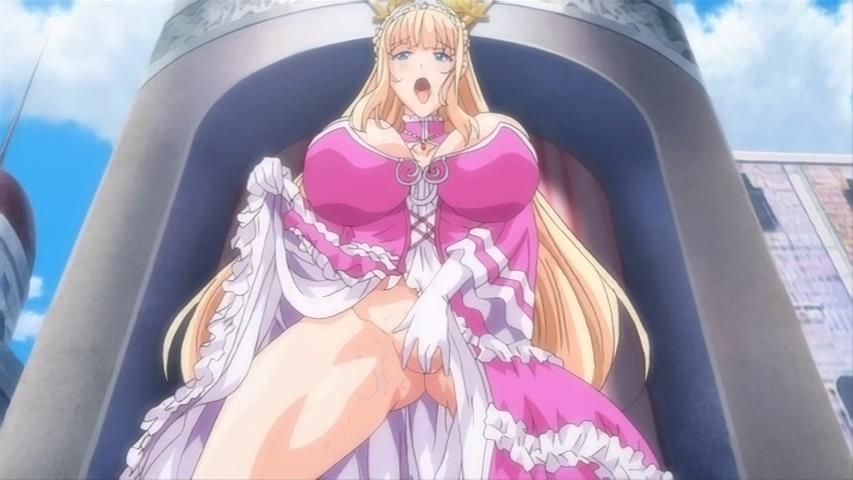 The Empire of Dominus is looking for a way to invade the Kingdom of Elstein. The princess of Elstein, Elize, is loved by the nation, but is secretly a pervert who likes doing naughty things while other people watch. She draws the attention of her trusted knight protector, Angelica. Angelica follows her inside and overhears Elize discussing her developing perversion with a shady woman, Baldr.

Elize fingers her pussy while addressing her subjects. Nobody notices that she is getting herself off except Angelica. The visual is funny and dirty.

The main sex scene features a bound Angelica and Elize being shown to a crowd of depraved men. The visual of Angelica protesting as more guys begin groping her tits and sticking their cocks in her holes juxtaposes well with Elize surrendering to the pleasure. The scene is a prime example of how to degrade your female heroines. Angelica’s constant complaining and telling off the men pounding her ass and pussy is super sexy to listen to.

The camera work is top tier with the characters’ bodies highlighted as the humiliation escalates. We get so many close-ups of Elize and Angelica’s pussy. At one point Elize, still bound, starts snapping her legs open and closed. It’s referred to as a ‘Pussy Dance’ which is as funny as it is enticing.

The character designs for Elize and Angelica are fucking gorgeous. They have tits bigger than their heads that flop with every step they take. Both characters have a variety of facial expressions that are sometimes exaggerated.

The anime’s colors look worn during wide crowd shots but bright and vibrant when Elize and Angelica are visible. The artists go the extra mile by including subtle things like Elize’s face shivering as she fingers herself. We get to see various x-ray shots throughout the episode. Elize’s hand rubbing her pussy, Baldr undressing Angelica with her eyes.

The music in the episode is average. The creators relied on real instruments but the songs all feel like they were taken from every sword and sorcery anime ever produced. The songs are well-placed and each setting has a unique sound to it. The music during sex is overshadowed by the visuals and voice acting. Strings, flutes, guitar and pianos were used to compose the soundtrack.

The voice actors deliver. The actresses playing Elize and Angelica have great, sultry voices. I enjoyed Angelica’s performance over Elize as the actress performs well even outside of sex scenes. Most of the episode features both ladies getting rammed by thick, hard meat swords, so they’re mostly moaning.

You can watch this anime at many shady streaming sites, including HentaiHaven.