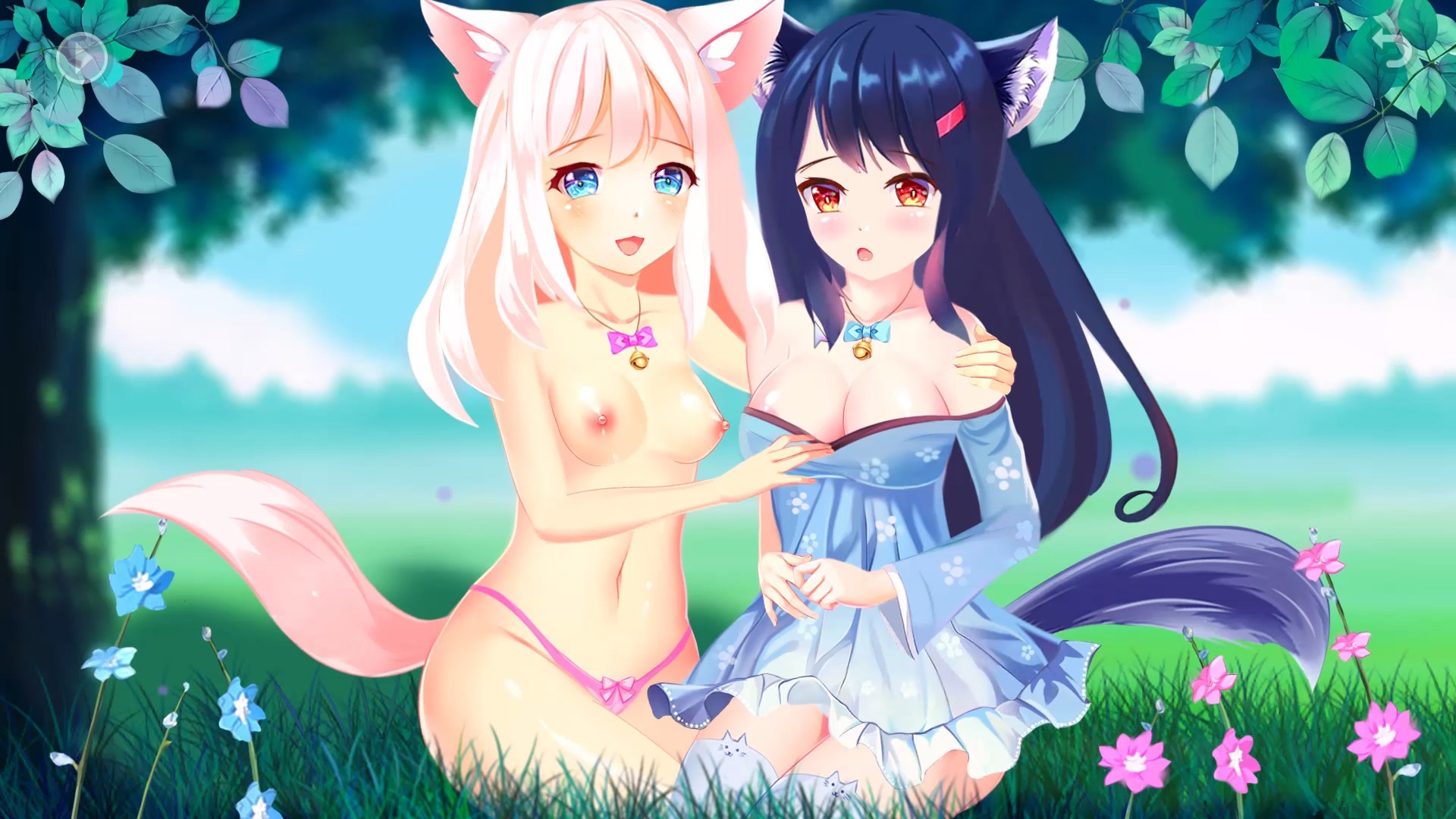 Sweet Story Neko is about two nameless catgirls who live in the forest. One day, they find themselves in heat and begin pawing at each other. They get onto some sexy action until finally passing out after a presumably long lesbian encounter. The game has no onscreen text. The only plot available is the game summary on Nutaku’s website. The images themselves fail to tell a coherent story.

Sweet Story Neko is a puzzle game. You advance through the story by matching tiles in pairs of two. There are nine levels. At the start of each, a series of tiles will flash onscreen. Remember their locations. Once you have cleared the board of tiles, you unlock a CG that tells you more of the story.

Tiles in the game are incredibly cute. There is an obvious cat theme present. The tiles will involve a kitty doing something cute like playing with a ball of yarn, sleeping in a box or lying on their back waiting to be tickled. Press Control + F on the keyboard if you want to cheat and clear the stage instantly.

The artwork in Sweet Story Neko looks sharper and more defined than in any of the other Pen in Apple ‘Neko’ titles. The characters both have a super cute design. Each girl pops, with soft bodies and plump titties. Hair styles, eye color, ears, tail and clothing immediately distinguish the girls from one another.

Sprites have enough facial expressions for every situation they are in. The background is beautiful. It uses the same art style. If you look closely, you can see the water in the background rustling, flowers blowing in the wind and other tiny details that bring the game to life. Our two nameless cat girls also use Pen in Apple’s game engine. Hair, breasts, hips, clothes, tails and cat ears have preprogrammed loop animations that play throughout.

Sweet Story Neko has no voice acting. Periodically, the girls will squeak, meow and moan when something lewd or sexy happens. The sound effects seem to be from some generic moan pack off the internet, but the game doesn’t heavily feature moans, so they’re not super distracting. The moans do not sound nearly as sexy as the developers we’re hoping for.

Birds chirping, water running and various sounds associated with nature play constantly while you play. The bird chirping gets annoying very quickly. You will also hear tile flipping and victory bells. The only sex sounds available are generic squelching noises whenever the girls finger each other’s pussies.

The music of Sweet Story Neko is heavily limited to one or two tracks. They are short and rarely play. They start and stop abruptly at random. All the songs have a slow beat to them. Original instruments like the piano are used.

Sex in Sweet Story Neko is unimaginative. It’s paint by the numbers and feels tacked on. I appreciate that more CGs are sexual, but the encounter between our two nameless girls is too vanilla to be a big deal.

One of them rips down the shirt of the other and begins fondling her titties much to the other’s embarrassment. They both work up a sweat playing around with each other’s bodies before slipping some fingers into their pussies. We get some ass licking and more breast play, but the game ends too short of a satisfying climax.

Sweet Story Neko is easily my least favorite entry in the Pen in Apple puzzle game series. While the girls are cute looking, the CGs are too generic and there is hardly any sex. The music is limited and much like all the other titles, the story doesn’t exist. If you are that into wild catgirls you can download Sweet Story Neko.