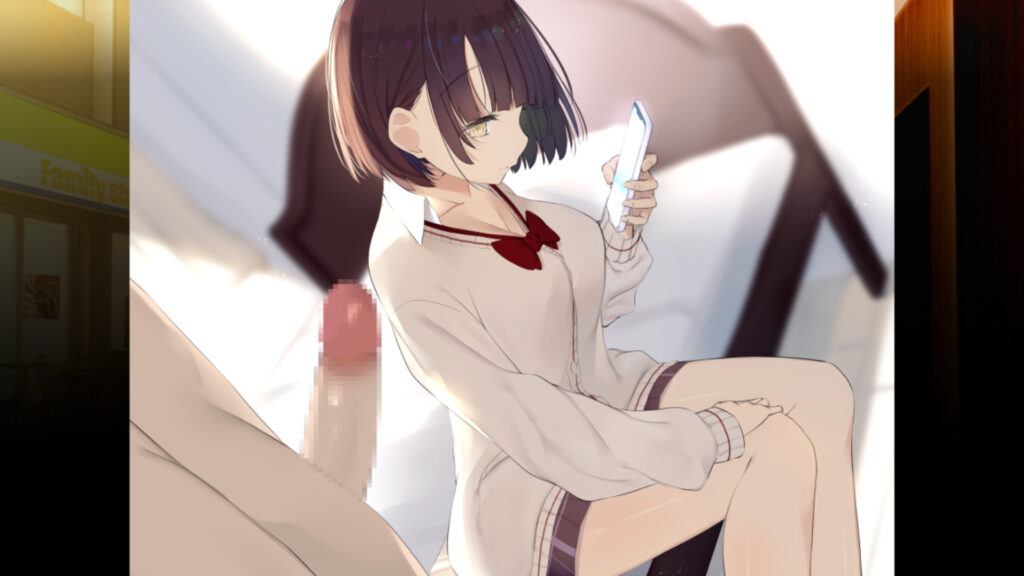 Schoolgirl Alice is fired from her part-time job because she’s so nonchalant and unmotivated. Lacking better options to make immediate income, she agrees to do a quick dirty job for a suspicious man to earn 10,000 yen! Flirting with danger, it doesn’t take long before she’s swimming in bad company!

Never played a Japanese game before? Please read our guide how to download DLSite games!

The core of the game is to figure out what these men want to hear in order to get paid more. If a pervy middle-aged man asks “Do you like older men”, you say ‘yes’! And if a lonely incel asks “Are you single”, you say ‘yes’! And if a nerd is looking for a big titty gamer girlfriend, you tell him, “I love video games!”. Tell them that size doesn’t matter! Tell them you’ll undress for triple the price! Toss your morals in the trash and sell your body to men!

Although the writing had some comedic moments, they were few and far between. Like how the busy businessmen hate their lives and want to regress to childhood, so they all ask to suck your boobs! That was hilarious and I wish the writer did more of that edgy humor.

The game is only two hours long. When she finally does have sex, it’s anti-climactic. The guy skips a condom and she doesn’t even care. I suppose she was really desensitized after all that? The weak ending really hurt the otherwise great experience.

Disinterested JK was created in the Unity game engine, but it’s a super smooth and stable experience. Use the mouse to navigate the menus. Press CTRL to skip text. Right-click to hide text boxes.

The game loop is fundamentally repetitive and simplistic. Once you learn what men like to hear, all you have to do is repeatedly click those options. But why would you do that? Currency is basically worthless since it’s only purpose is to buy expensive items to help you seduce more men. But you don’t need the items if you just talk to enough people to level up. Every level allows you to talk to men longer, giving you a better chance of seducing the high-paying johns.

The sad thing is, this game had a lot of potential. You cannot have sex with policemen or school teachers. It would be really hot if level-ups allowed you to fuck more difficult men like that. But instead, they remain unfuckable, which is sad.

The silhouette images used when speaking to strangers are sourced from “crescent arpeggio”. Naturally, we never get a good view at the men fucking Alice. If you’re hoping for dirty old men or something, you’ll be holding your breath forever.

There are a handful of background images to reflect various locations around town. These include the player home, shopping plaza, public park, train station, and more. Frankly, these all blend together since there isn’t emphasis on the location of your sexual encounters.

Although the game was made in Unity, players are able to switch smoothly between windowed and full-screen mode without any game crashes. Frankly, the game engine itself is stable and high quality. I just wish there were a better variety of artworks.

The sound effects are sourced from Pocket Sound & Taira Komori. However, they’re pretty limited. Even during sex it wasn’t like there was balls slapping into flesh or anything vivid. These effects are largely for menu navigation like when you spend on booster items.

Alice starts this game as a virgin, and sells her virginity to some random stranger for way too little. All this buildup to the big sex scene and it was a huge disappointment. You go into a love hotel, the same generic music is playing, with the same UI, the same boring dialogue, it didn’t feel like a big deal at all. All that buildup and the big scene fell flat. I can imagine this was the intention, to emphasize the prostitution experience where sex is treated as nothing special. Still, I felt the game was building up to this big moment and could’ve majorly capitalized on it.

Download Disinterested JK. If you liked this and want more indie whoring sims, read more of our reviews of prostitution games.