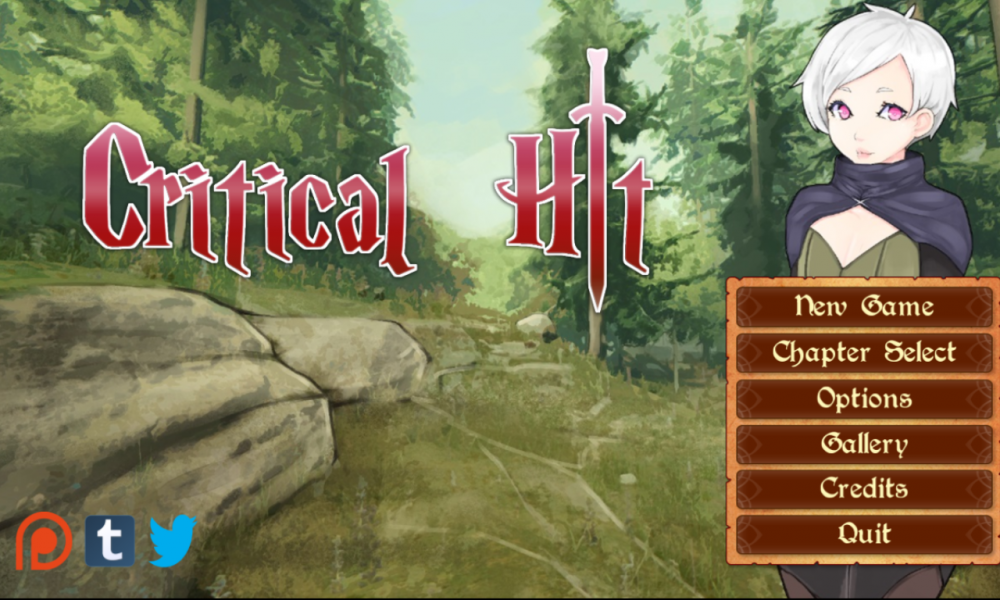 Critical Hit tells a story, in the style of Dungeons & Dragons. The protagonist is an unlucky boy adventurer. His name is Akira, he’s a badly rolled toon with a weak constitution. He cannot fight, he has no muscle, he is just a doofy asexual fuckdoll that gets anally wrecked at every monster encounter. The story begins with an explanation of Akira’s dual personality. It’s weird as fuck.

The artstyle has a fitting color scheme for a medieval fantasy setting; the clothes and backgrounds have some nice earthly natural colors, ie. green, grey, many shades of brown, et cetera. The character sprites look better than the CGs in my opinion; Personally I’ll rather fap to this boy’s sprite than his CGs. The consistency and solidness of the art is a merit.

Oh! And let’s talk about the interface. The game autosaves as you progress through chapters. No need for manual saving! And the menu buttons, and archive, are frankly a tad bit smoother to use than even in Japanese eroge, as the menus in those game I’ve often found to be suffering from rigid uncreative design. The interface in Critical Hit is unobtrusive. Overall, the game looks and feels professionally made.

Critical Hit has no voice acting, and SFX is not particularly punchy. The main audio you hear is therefore the music, which is unbefittingly intense and ominous. For such a light-hearted game, such dark melodies create a little bit of a cutesy contrast. But it works! Somehow.

The game has five musical tracks in total, seemlessly blending in to the scenes they play in. But seriously, the menu music is also in the actual story portion of the game, promising a very dark tale of existential subtexts with a hint of teenage angst, yet the overall atmosphere is light and goofy, so what the fuck? I’m not much of a music critic, so I’ll just leave you with “music’s good”… some tracks just don’t really fit the atmosphere.

The writing style is youthful and self-aware of the ridiculousness. The story is narrated by a faceless game master, and Akira’s parallel soul narrates too. The dialog was rough around the edges, and Akira’s personality was difficult to distinguish from the parallel soul. The other characters, like the goblin brothers, had personality, but there is something particularly unreal about brutish gobbos talking in full English sentences. Coherent dialog is easier to read, and to write, but it still irks me when finer details in dialog are not polished. But hey, think for a minute; a girly cock-craven homo-sexual acting as the main protagonist of a piece of contemporary media? Just no. No homo. Sexualizing homosexuals? That is just homophobic. The jokes are aplenty, because this is a funny jolly story of a bitch boy getting his ass destroyed by big monsters cocks… neither does the dialog shy away from fucking profanity! Fuck. FUCK FUCK FUCK FUCK FUCK. The f-bombs get dropped at every turn. Don’t like it? Kill yourself.

The sex scenes are descriptive enough and don’t last ridiculously long. Male ejaculation doesn’t take too long to achieve anyway, so perhaps the content suffices for a few faps. During these encounters, Akira’s parallel soul, “Akira Spirit”, takes over his body. While Akira spirit is smart and sexual, Akira is an asexual literally clinically retarded fucktard, and he makes stupid random decisions, like eating mold-ridden bread for shits and giggles. The racist bigoted homophobic ableism is off the charts.

My only real complaint about this product is that the scenario is very fucking short. Buy this game.