This PC visual novel is the story of an adventure through time, and space. You play as Kazuto, a member of the kendo club. You are transported back in time, into an active warzone in ancient China.

Hey, I’m Soul Tsukino. I’m an anime fan since the late 90’s. This is my review of Koihime Musou. 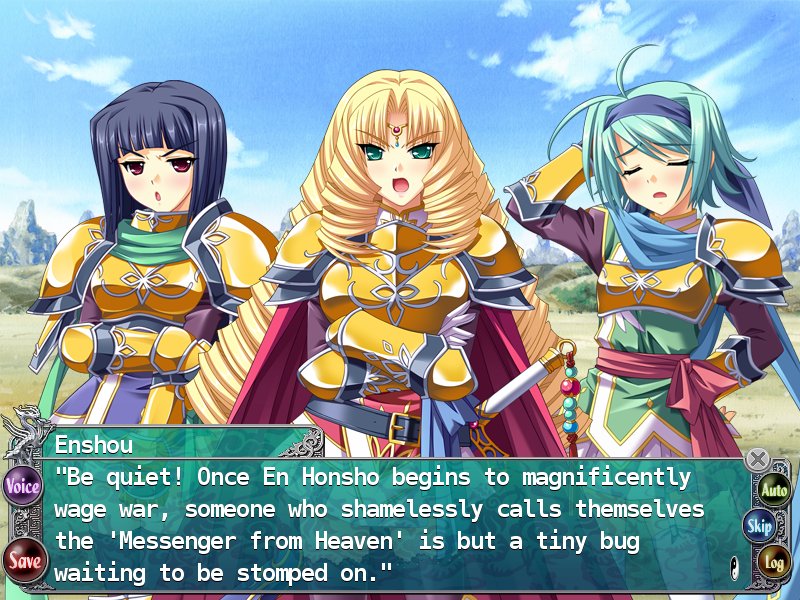 The nearby museum has an exhibit for ancient relics. A mysterious young man is trying to steal the artifacts, when Kazuto finds him. Time-travel magic is triggered, Kazuto gets transported 2000 years back to the past. He becomes “The Messenger from Heaven”. He is immediately made the leader of his own village, surrounded by cute girls. According to a prophecy, Kazuto is foretold to end the raging war. He quickly realizes, he’s now part of the story “Romance of the Three Kingdoms”, though in his version, all the characters are girls. He is joined by Aisha, and Rinrin, as they take their small village, and make its army grow until they’re the military powerhouse of China.

Once you are past the introductory phase, most of the plot is about fending off attackers, and forming alliances. Bulk of the dialog covers topics of military strategy. Many of the character you meet during military operations. Some are captured prisoners. Every country has its leader, and at least one general. Each character is introduced with three different names as you meet them, a proper name, a given name, and a “true name”. It gets confusing really fast.

The actual story part doesn’t give you any options for dialog, or choices you can make. You are just along for the ride. 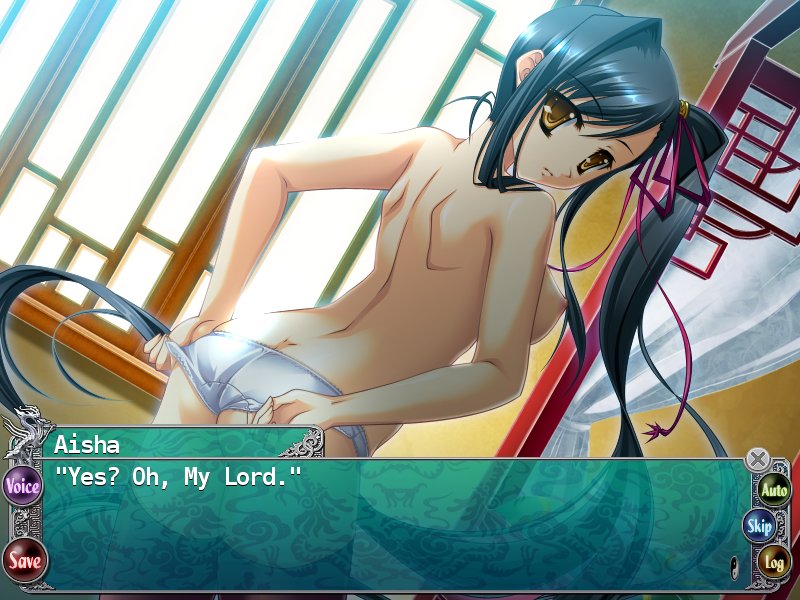 The art style is very 90’s, with bright colors, and big eyes that remind me of the television adaptations of Rumiko Takahashi’s works. You can tell that each character was given some time in development with a specific character type in mind. You have Rinrin, and Shui fitting the “little sister” archtype, while other characters are designed to look more sultry, and seductive. Each character has at least a hint of some kind of fetish stereotype behind her design (maid / imouto / animal lover, etc.).

The developers barely put effort into the less important characters. The rank and file troopers are just the same model, with different armor, or clothing. The people, and peasants that run around aren’t even animated.

The game doesn’t amaze with its visuals. Like other games of this type, each character has maybe six, or more faces that are used over, and over to express different emotions. The expressions get a bit old, after seeing a character showcase those emotions a bunch of times. This is worst in the cases of Rinrin, and Aisha, who are your compatriots in the adventure. There is barely any gameplay to speak of. The only parts of the game you have control over, are the military battles. You get to pick your general and strategist for the battle. You pick the battle formation, and one of three attacks, using your archers, the light infantry, or heavy infantry. The combinations you choose affect how many enemy soldiers you kill in a single strike. The problem with this is once you figure out each characters strength, it’s easy to just do the same thing again, and again until you win. If you lose, you can do the battle again but are given MORE soldiers.

The music is the same type of music you find in any other Japanese visual novel. Despite being made in 2006/2007, it sounds like it was made for early 90s Japanese media. Some of the music seems to be inspired by the era of 8-bit consoles. The highlight is the opening song, played by Rekka Katakiri. It’s easily the best song of the game, and also the only song not generated by a computer.

Everyone has their unique voice thats fits their character, and the emotion they’re trying to convey. The voice of Rinrin is bright and bubbly, Shui is always shy and stuttering, and so forth. The voice acting is not “bad”, like one person was doing all the voices. Each character is distinct and separate. Not every line the characters utter is voiced. But after a while the voices just kind of blend together.

The one problem that shows up is that you will read the dialog much faster than it is spoken so lines tend to run together and go much longer than the screens they correspond to. The characters are basically just a collection of Japanese girl fetishes: The young energetic little sister, the quiet animal lover, the “collector” lesbian character who has a thing for the other generals. and so forth. There are even maids. Seriously this game takes place in an ancient Chinese time setting, but somehow two of the characters have french maid uniforms. Despite all this, there’s very little sexual tension between characters. I felt like the writers had something more in mind, but just never pulled the trigger.

The best word to describe Koihime Musoi, is “basic”. Nothing about the game is amazing. The characters, the story, the gameplay, are just what you’d expect from a visual novel. If you are new to this media, this can be a fine game to start with. But there are better games out that outshine Koihime Musou in every aspect. Download at Nutaku.