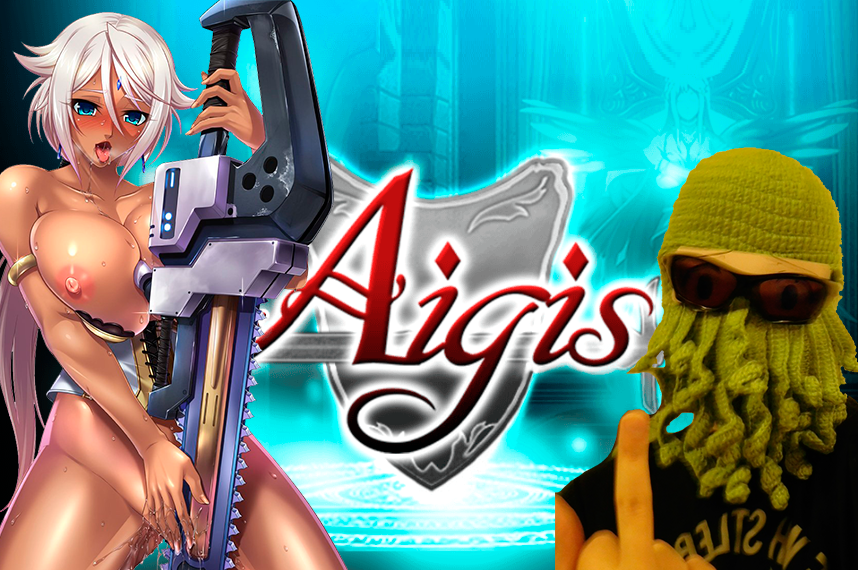 NOTE: This game has been discontinued on Nutaku

Developed by DMM corporation, Millennium War Aigis is a medieval tower defense, with RPG mechanics. It’s a truly unique adult title, where your units gain experience, and retain their power between maps. You collect new units from successfully beating maps, which you can include in your army, or fuse with your stronger units, to increase their levels.

This game is one of the most fun free browser titles available at Nutaku! 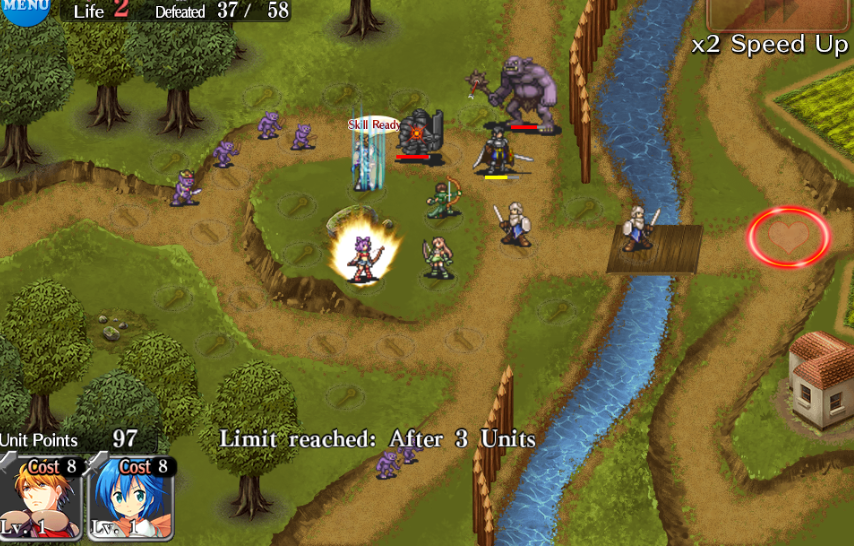 Let’s not talk about the story. Like, it’s a simple context, to a medieval-themed tower defense game. But there’s no plot, so keep your expectations low, gentlemen, and ladies. Summarized, the story is that demons are pouring in, and you gotta defend the human realm against them. And, you’re a blind jew pianist under Nazi occupation. There, total Oscar-bait, hand the trophy to the writer of this.

The art is good, but looks somewhat dated. There’s a certain feel here, like the resolution of the imagery, the colors and lines, just seem like they were drawn in the 90s, or early 2000s. Newer digital art programs simply produce better looking stuff overall. Not saying the art is bad, but you’ll definitely feel like you’re being taken back in time. The actual in-game art, with the units fighting, looks a little over 16 pixels. You can’t see people’s faces; their hands are virtually meat balls without fingers. The aesthetic is beatiful in a retro kind of way, so if you are a 90s kid, you’ll definitely be reminded of how it felt to smack your old Super Nintendo, Playstation, or (God forbid) Sega genesis. 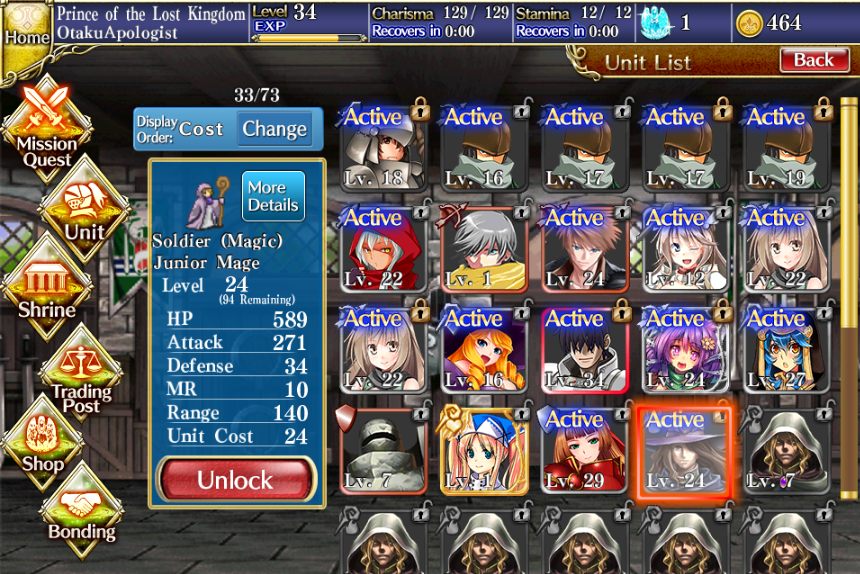 You have three lives. If three units pass your troops, and touch a red circle on the map, you lose. You can place melee units to block roads leading to the circles. Some melee units can hold the attention of several enemies at once, but so far not even my tanks have held more than three at once. You have to focus in your strategies on killing the enemies as they come. For this purpose, you want archers, and mages. There’s also healers, and rogues, barbarians, making me think this game was inspired by Dungeons and Dragons.

Every unit costs a different amount of energy to place on the map. The higher tier units cost so much, that you’ll need to have some weaker units for your opening “build order”. The cheapest archers for example cost barely anything, and you can quickly populate the map with them, but you’ll want to replace them with elven archers, or similar, as the map progresses.

The game is a little limited with where you can place units. The squares you can place them in, are always the same for a map. This has obviously made it easier for the developers to balance the game such that alternate strategies are valid. It’s still a little too “casual gamey” for my tastes. 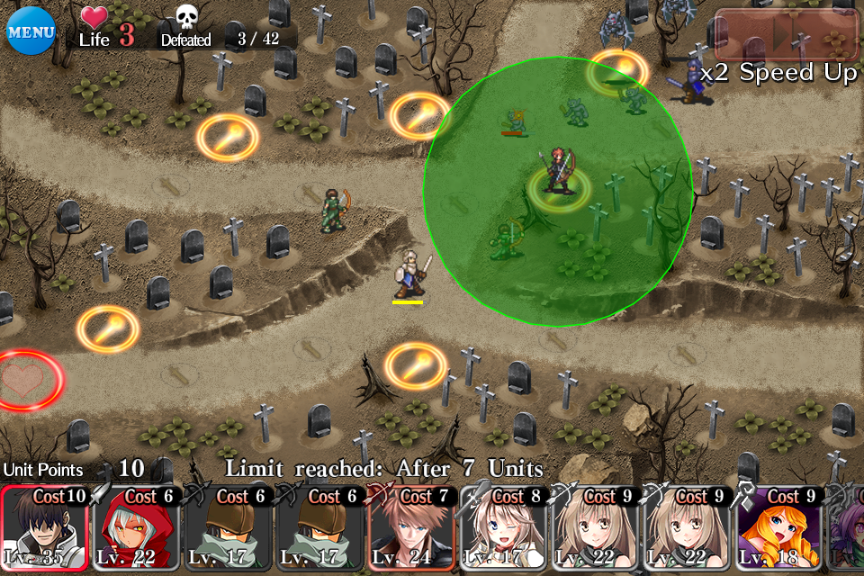 The enemies spawn from various places on the map. They’ll keep spawning, until you’ve killed them all, and the score screen rolls in. There’s lots of things you can do in the game, not just play the campaign. There’s events, and special missions, with great challenges, and equally great rewards.

I could talk endlessly about the brilliance of the gameplay tying into the business model. Every little thing works so well in this game. The only real criticism I have really, is that the menus are a little convoluted to navigate.

Millennium War Aigis is free to play. Meaning, you have optional things you can buy in an in-game store. These products include damage boosts that last for several days, you can roll the premium gacha (new unit lottery), there’s a stamina system, and so forth.
The currency used in the game is crystals, that you can buy more with real money. You also gain free crystals from normal play by beating maps, earning 3-star ratings. Crystals can be used to fully re-up your stamina points. 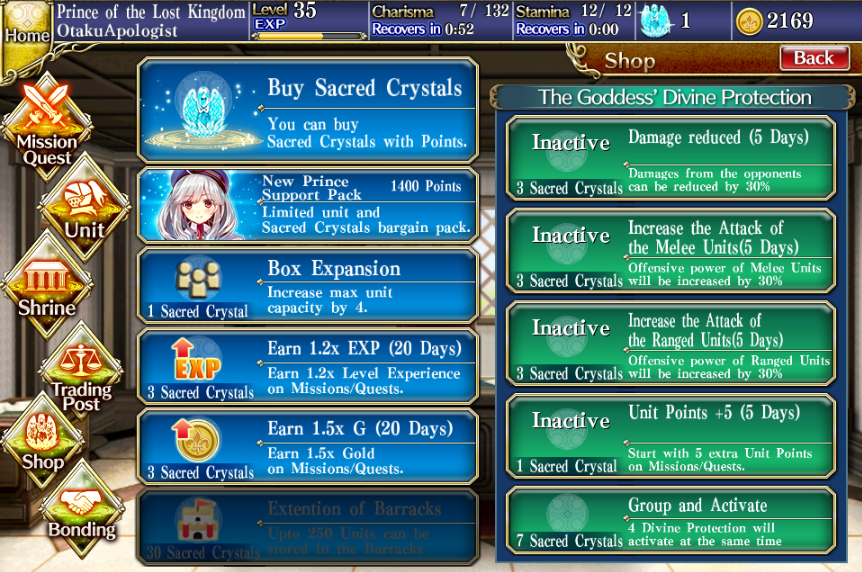 You don’t play this game for the sex, unless your standards are very, very low. The sex scenes are a still image of the girl usually just riding a dick, and then there’s descriptions of dick digging into pussy, and some minor dialog. This game is not a very sexual experience, though it adds to the atmosphere, to know that you’ve fucked some of your units that then show up on the battle field. You have to buy your girls some gifts. Gifts increase “affection”, which ups a unit’s effectiveness in battle. Once a girl has enough affection for you, you unlock a hentai scene for her.

The music is cartoony. There’s an epic tune that plays during a map, that quickly hypes up the threat of an impending monster attack. I haven’t played far enough to know if there’s more than one battle music. It’s good in its own right, but isn’t really immersive. The menu music is more medieval, even though I cannot name the instruments. The music overall is fine, it has personality, feel, all that good shit.

The sounds are very, very cartoony. From the sword hits, to the magical spells, nothing sounds realistic. It works in the game, doesn’t take you out of it, but it feels totally like a game. The worst sound effects that grate my ears, are the hit sounds of melee units. That is not how any blade rending flesh should sound like. It’s not on the level of Super Mario cartoony, but goddamn. Also, often the enemy sounds, such as the howling of wolves, sounds really fucking off. 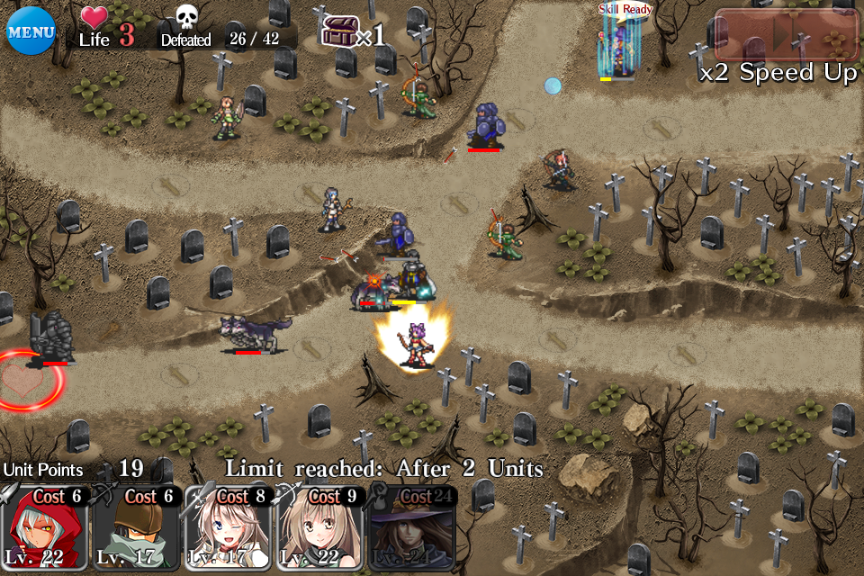 Millennium War Aigis is a great game. It’s also a challenging game. The way the progression curve is, you could play this game for a year non-stop, and still have content left to enjoy. You gain rarer, and rarer characters with greater potential than the units you start with, that you can slowly bring up to speed with the rest of your team. If you’re easily addicted by RPG mechanics, of leveling up, collecting things, unlocking new abilities, this game will do that to you.