A free pornographic video game based on Disney’s Aladdin, the classic movie about a romance between a thief and a princess. In this game, there is no tender romance. You train princess Jasmine into a decadent cock-addicted sex slave.

In this alternate reality, the devious royal vizier, Jafar, usurped the throne of the sultan of Agrabah. Instead of getting tricked by Aladdin, to become a genie trapped in a lamp, Jafar’s final wish was for the Genie to become mortal. You play as the Genie, who is tasked by Jafar to train princess Jasmine into a sex slave. The genie has no memory of the events that preceded him becoming mortal. Aladdin has been exiled (spoilers). There’s no hero to save the day.

The dialog succeeds at realism. Even without voice acting, you can hear the voices of these characters while reading what they say. I was pleased with the storytelling overall, excluding some of the awkward writing in certain sex scenes.

The writing suffers from minor grammatical errors here and there. These issues are thankfully rare.

Princess Trainer’s game cycle is the following: Every day, you choose one action for Jasmine to take. The choice is mainly between Jasmine working a crappy demeaning job, or studying to be a sex slave. One makes money, other drains the wallet. Your winning conditions are to train the princess into an obedient sex-addicted cock sleeve, and make enough money for the wedding between Jafar and Jasmine. The third condition is that Jasmine’s reputation among the people must be destroyed. Once all conditions are met, you can marry her to Jafar, and win the game.

Each day is divided into daytime, and night-time. During the day, you choose a location to visit. You can make Jasmine work at the location, if you’ve unlocked the option. You can also send her to study in the sex slave academy. While she’s working or studying, you can attend any other errands you may have. The daytime ends after you complete any kind of event, like a quest, or click the Genie’s portrait at the below-right corner. During night-time, Jasmine returns to report about her humiliating day. After enough training, you can visit her room, to force her into giving head, to dance erotically, and even vaginal sex. Buy her outfits, and you can dress her into your preferred sex slave attire. You can force her to call you “daddy”.

During night-time, you can visit the town, and engage in a limited variety of activities. You can do physical exercises, which helps you complete certain quests, you can gamble, drink wine, visit the brothel. After that, the game starts a new day.

Princess Trainer is a repetitive grind in between juicy surprises that break the monotony. If you’re good at figuring out the completion conditions of the game’s various quests, you can unlock new content at a healthy pace. You will also access more humiliating, better-paying jobs for Jasmine. Personally, I played so poorly, that I got stuck for maybe 50 days. Jasmine was just waiting tables day after day at the local inn on a crappy salary. I made every mistake in how I spent my money. The game seems to be designed to progress rather linearly: Buy the cheapest dress, take the easiest quests, take the cheapest sex slave courses, don’t save money, don’t try to skip ahead.

My problem was, I wanted to immediately turn Jasmine into a prostitute at the local brothel. I cut every corner to buy her the “whore dress”, and get the permit from Jafar to reopen the brothel. I spent 150 days grinding towards this goal. But the corners I was cutting, destroyed the growth of my income, as the higher-paying jobs weren’t so easy to unlock. My mistakes massively delayed the game’s other two fine pieces of ass to enter the stage.

Every visual asset in the game is hand-drawn by Akabur, in his unique style that emphasizes thick lines, and simple colors. His style is gritty, cartoonish in a good way. He manages to draw his male characters disgustingly rugged, while the women have curves and faces to die for. His characters are highly emotive too, as they’ll change expressions many times during conversations. He also uses simple shadows really well.

You feel the touch of Akabur’s drawing hand everywhere. The hand-drawn style extends even into the game’s menus, and the stylized text boxes. I found myself enjoying the tiniest details, like the font he chose for the text.

Akabur cuts corners with the backgrounds. There’s barely any background art in the game. You’re rather treated to the same visages of the city you’re already staring at 95% of the game time. When visiting the town’s many locations, the background turns a dim dark orange, like you’re indoors. It’s a trick that works incredibly well.

The game has an issue, that when full-screened, some of the screen is cut off. I doubt it’s a universal issue, as I’m sure the game went through plenty of testing by Akabur’s patrons. I suspect some computer users to encounter this issue. Thankfully, in windowed mode, you can freely resize the game window, and see everything you’re supposed to see. Press ALT+ENTER to hop between windowed mode, and full-screen.

The soundtrack is limited, but high quality. The opening theme is a whimsical Arabian style song, played with whatever crummy instruments they fiddle their dicks with down in the middle-eastern blood sands. Listening to that chilltastic flute humming at the skies, you can just imagine the local military drone fly over, unload its payload, splattering the local wedding party into a black, smoking crater. The song starts from a particularly high note, like the day’s prayer has been called in the local minaret. It’s the perfect song for this soul-filling epic of state-sanctioned domestic violence.

The bulk of the time you’re listening to a short poppy loop of snappy beats. This song plays during daytime, when you’re selecting what humiliating tortures to impose on the princess. The energy levels are through the roof, the beats dig through your eardrums, like you’re in a downtown club manipulating drunk, needy bitches.

The game has a slow, indistinct composition for night time. It’s almost nothing but ambience, lacking any highlights. Meanwhile, if you go to the marketplace during night-time, and choose to do physical exercises, you’ll hear Eye of The Tiger, which is only the most cliché training montage song ever. It’s still a fun little gag.

There’s other songs that play during rare occasions. One of the side bitches, Lola, has a very upbeat theme you only hear when she’s on screen. When I helped catch a thief for a quest, there was a chase scene, accompanied by a unique, super intense piece. Oh, and when you visit Jafar in the palace, a very powerful instrumental composition booms in the background.

Princess Trainer has no voice acting. There are no grunts, or moans during sex scenes.

The menus have light click sounds, the kind you hear when flipping a light switch. But little things like saving and loading game files, don’t prompt any effects. The game feels slightly unfinished in the audio department.

The game has juicy visual novel style sex scenes, with several slides showing the progression of the scenario. You access these scenes as Jasmine gets deeper in her slave training. They’re not called “sex scenes” in game, but “obedience tests”. These tests begin with simple requests, like ordering her to feed you fruit. She’ll resist you tooth and nail, until you force her through training sessions in the town’s sex slave academy. Piece by piece, you peel off that prissy princess attitude. There’s 16 obedience tests in total, covering kinks like groping, dirty dancing, blowjobs, and vaginal sex. You can visit her in the brothel too.

With the mad stacks that Jasmine was bringing to the house, I was often out drinking, gambling, groping new girls, to bring into my harem. There’s two other girls you can snatch into your harem, called Lola, and Iris.

The game has more sex scenes than you’d first expect. You unlock the content bit by bit. At the time of writing, I’m regularly visiting the brothel to bang Jasmine during her working hours, paying her the same money she brings home in the evening. Because she’s a slave without human rights, I steal every single dinar she makes. After enough sex slave training, she finally learned to love her chains. 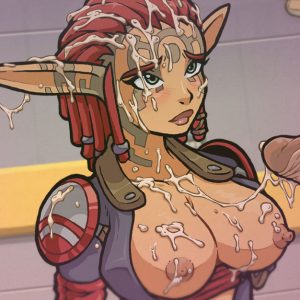