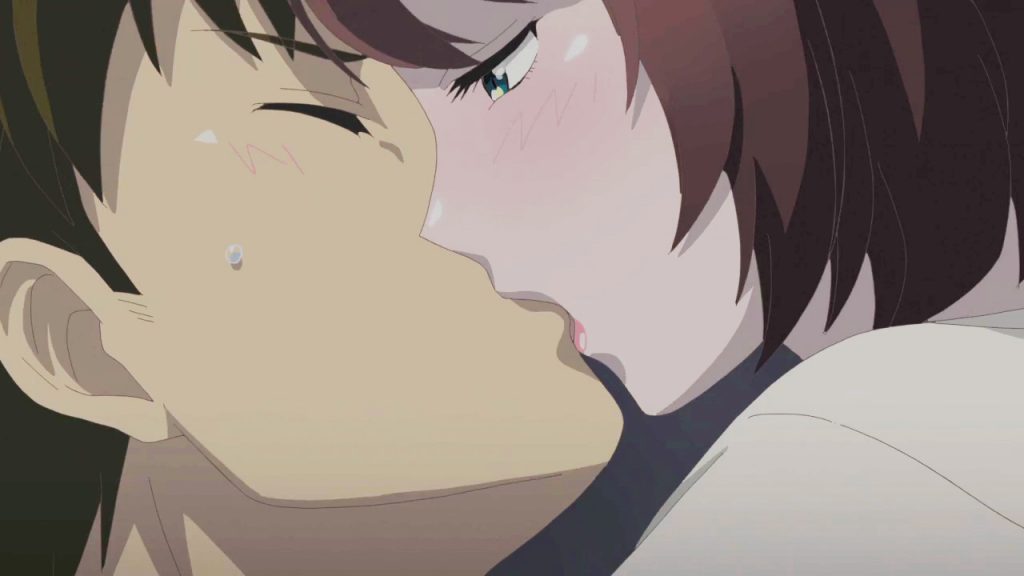 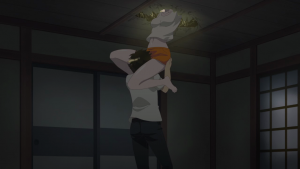 Aikawa Sousuke is just trying to get by in life. He works his job, he goes home, sleeps, wakes up, repeats. But one day he hears a creaking noise coming from upstairs and goes to sort out the racket. Unyuu Sunao opens the door, and a gorgeous, big-breasted anime babe tells him she wants to be an actress. The noise he keeps hearing is the sound of her rehearsing. Seeing her body, Sousuke’s boner takes over his mind and he abandons his investigation.

The weight of the ceiling finally breaks under the weight of Unyuu’s massive breasts and she falls through. Sousuke catches her with his mouth embedded in her crotch, much to Unyuu’s embarrassment. After a little wobbling, Unyuu finally falls completely through and lands on Sousuke’s dick. Like right on there. Sousuke even comments on his penetration. 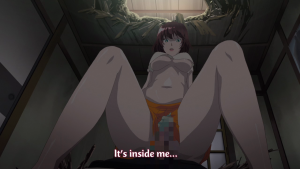 The show has few sound effects. We have floorboards giving way, footsteps on the ceiling and ceilings collapsing. The latter makes for an excellent sequence. In the case of the sex, we have breasts being sucked and fondled by someone who clearly has never fondled another human being. Hips thrust and people grunt as they pump into one another.

You could argue that the entire sex scene is a symphony of two people playing one another as instruments. The pace of the music slows down when the action does, almost coming to a standstill before blasting the ears once the sex resumes. 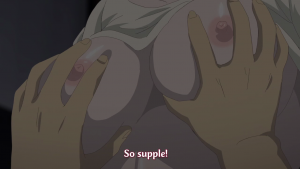 The lighting is very dark, since the episode takes place indoors. Unyuu’s breasts deserve a special mention. There is a single shot of Unyuu opening the door where we get to see her bountiful beauties take in the warm sunshine. Her boobs serve as the highlight of the story. There’s also an amazing shot of her ass bouncing up and down as Sousuke plows her pussy. The animators were doing their best here. Sousuke’s dick disappears inside of Unyuu early into the sex scene.

Even with limited time to boink, the episode is packed full of steamy sexiness between Sousuke and Unyuu. I was surprised that Sousuke’s dick managed to survive Unyuu piercing it with her landing. What a bizarre way to lose your virginity.

Sousuke just assumes that since his dick is already inside of Unyuu, he has automatic consent. He starts groping her boobs and sucking on the nipples. Unyuu doesn’t take much encouraging to respond in kind. She’s already on another guy’s dick, might as well enjoy it. They kiss while Sousuke starts riding the wannabe actress on top of him.