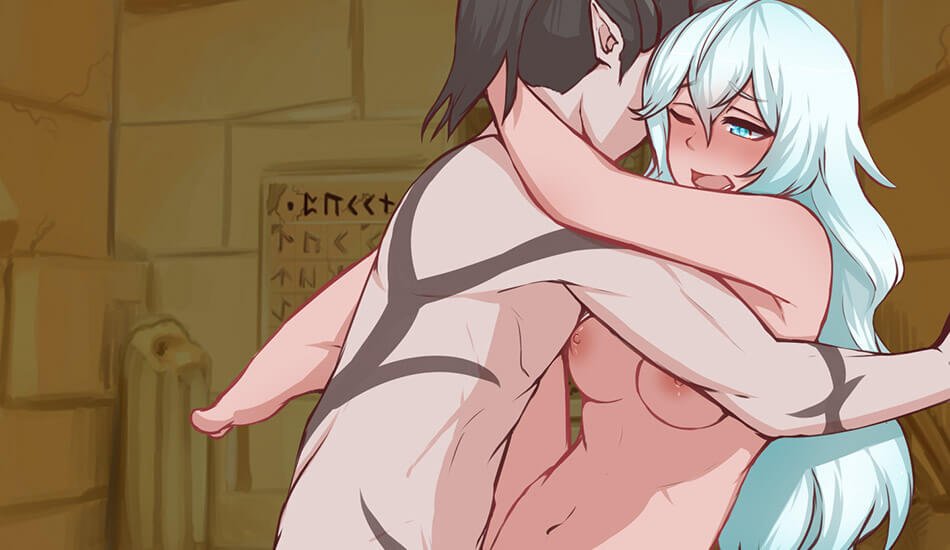 During an age of rising religious and racial tensions, four people of differing origins come together to prevent the world from plunging into chaos. Each person has vastly different personalities and ideologies. You follow the adventuring party on their journey as they struggle with infighting and big egos tearing the group apart.

This game features depictions of sexual relations between male-female couples and lesbian couples. 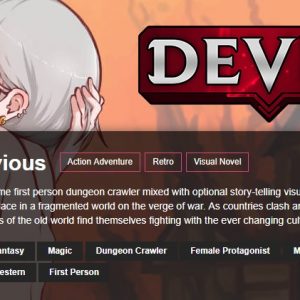 A party of four headstrong adventurers is trying to prevent history from repeating itself. The age of blood is coming. Each are knighted as Arbiters, sent out by royals to hear the words of gods. It is a long held tradition, one sorely needed in these turbulent times. Tensions have been rising and several nations are on the brink of war.

The Arbiters are thought to be a beacon of hope among the people, but they are tragically flawed. The members of the party are not the most heroic, nor the smartest, nor even the kindest. Their differing beliefs and personalities result in petty squabbling, indecisiveness, and lack of trust for each other. Infighting isn’t the only thing they need to look out for, because each nation has an agenda, and they seek to use the Arbiters to further their own ends.

You can experience the game from the perspective of four characters: Lyss, Leonhardt, Ithyrria and Niko. Each character has a different story and ending, which adds a good amount of replayability to the game. 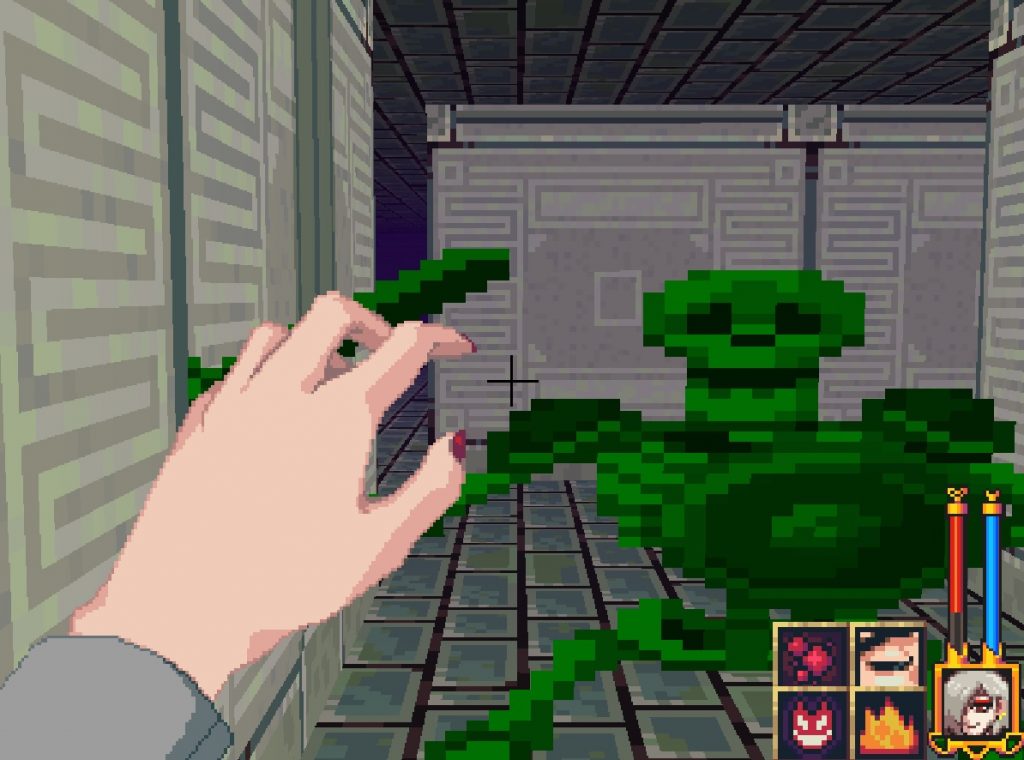 The story tries to be a grand fantastical tale and it succeeds in some ways. Much of the failings comes from the writers attempting to spin a complex web of political intrigue. Nations backstabbing one another and vying for power would have been less boring if the main characters were involved in it, not simply moving from set piece to set piece. On my first playthrough, the beginning and end was the most exciting, but the journey felt lacking.

The writer tries to foreshadow events, making backstories and character motivations mysterious, but they end up backfiring. Due to the nature of each character having a different story, some character routes feel weaker than others. Lyss’ route had a strong start, but by the end, I felt like her story was too stitched together. Scenes jump back and forth, making it difficult to keep track of what is happening. For example, I would be reading about how the party just defeated a mysterious monster. The scene ends, shifting to another batch of characters doing something else. Then in the next scene, I was back with the party, but they were in a different location. I had no idea what was going on. 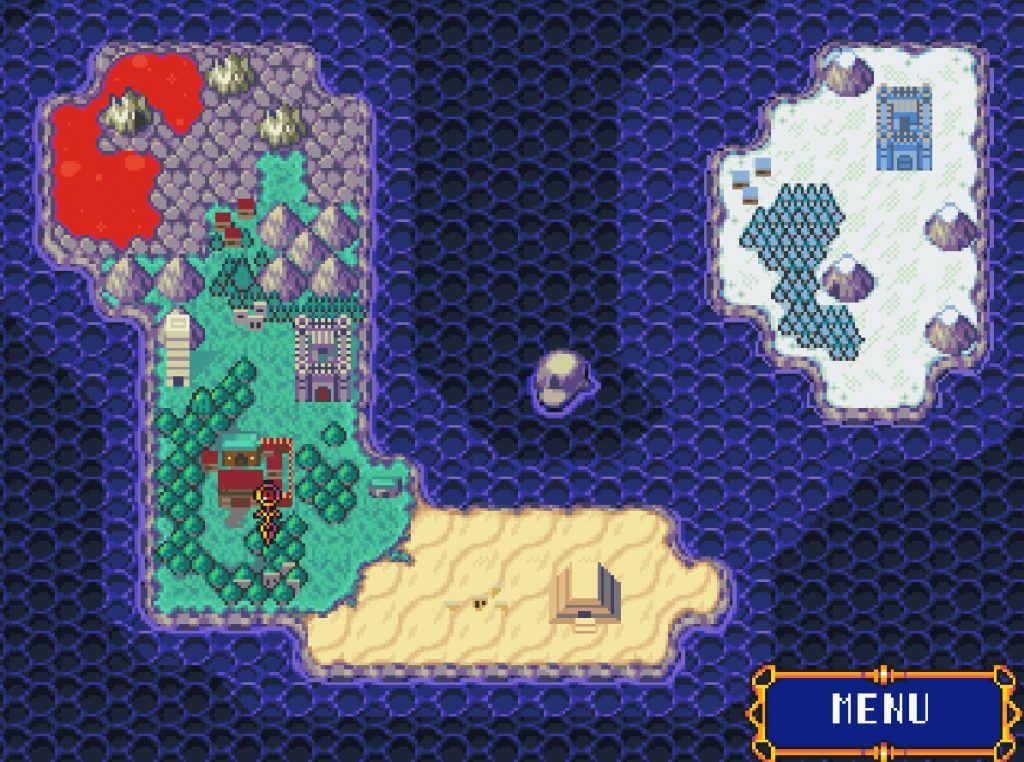 On Leonhardt’s route however, the story was easier to understand and the events made sense. His story line would have been great for my first playthrough. It answered several of the questions I had after going through Lyss’ route. I feel like the game should have provided hints on which character I should start with.

The writers had lofty ideas for the plot, but the execution is messy. There are too many subplots that don’t tie in well with certain storylines.  The end result is that some character routes feel disconnected. On the bright side, chemistry between our main characters is what kept me going. The dialogue is enjoyable, occasionally witty, there’s never a dull moment during an exchange between characters. Much of the drama stems from each character’s ideological differences.

Lyss hails from Vahre. The people of this race are atheists, a point of contention that causes friction with religious folk. She was the first character I picked because of how aggressively sexy her character looked. Her personality matches the snide and powerful vibe she gives off.

Niko is a Quillian. His people are easily distinguished by the spiralling horns atop his head. He and Lyss are constantly at odds with each other. He doesn’t hesitate to fight back and likes provoking trouble.

Ithyrria belongs to the nation of Kyrii, They are peace loving, idealistic people, and this shows in how she attempts to broker peace between Lyss and Niko. Unfortunately, she’s quite the pushover. Despite her good intentions, she can only try to prevent the situation from escalating.

Leonhart is from Arramore. Like his people, he is an extremely strait-laced person devoted to his religion. He is soft-spoken and polite most of the time, but any attacks on his country and beliefs easily enrage him. 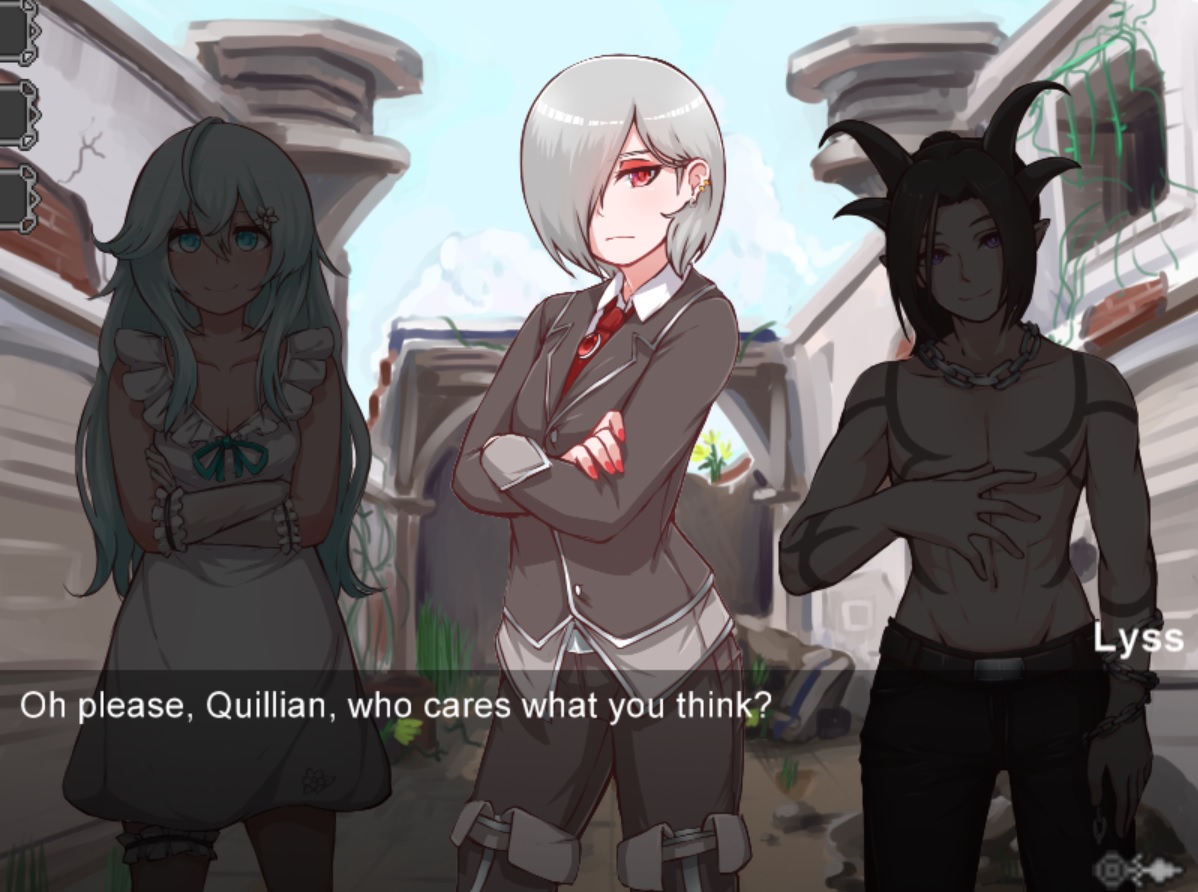 There are two gameplay segments, visual novel and dungeon crawling. You can play them together, or just one specific segment. The visual novel section is standard, clicking the textbox ‘turns’ the page and advances the story. There are no choices to be made, making it more kinetic than a typical visual novel. The player can only save their game at checkpoints, so make sure to save whenever you get the chance.

The dungeon crawling sections are a mixed bag. It’s a solid attempt, but feels far too clumsy when compared with other games in the same genre. The novelty wears off quickly. However,  transitioning from reading to dungeon crawling is a great change of pace. It’s refreshing and prevents the game from feeling stale.

Unfortunately, traversing a dungeon can be a headache. Identical walls and tiles make everything blend together, I usually gave up trying to navigate an area and just walked around with my map open. I found that having four skills was quite redundant overall, because the damage dealt to the enemies is roughly the same. There’s no point in experimenting with different skills when you can spam one to victory.

Character sprites and CGs are identical, likely drawn by the same artist. The art style is noticeably inspired by the Japanese anime style, but the overall vibe of the character designs is distinctly western. Top Hat Studios always has an eye for good artists. Characters are very well proportioned.

The artist did a splendid job at making each character unique, in terms of appearance and outfits. Some characters get a variation of outfits, but they usually have two states, clothed and naked. I personally loved the female designs over the males. The women in the game are the definition of eroticism, especially Lyss. You can almost feel her hunger for sex oozing off her, which is in line with her written personality.

In the visual novel segments, backgrounds are decent but forgettable. They have a painted style, which is quite the contrast to the high resolution character sprites and CGs. It isn’t much to look at but does the job of setting the tone of a scene. I also noticed that a lot of images were reused in different scenes.

The colour palette is quite varied, bright ones for characters, and darker earthy colours for backgrounds. Shadows are subtle and work well to highlight body parts and clothing. Old school art is used for dungeon crawling segments. Monster and weapon designs are detailed and lifelike, ensuring a nice change from story sections. The environment art is similar, but the tiles used for things such as walls and floors quickly get tiring to look at. 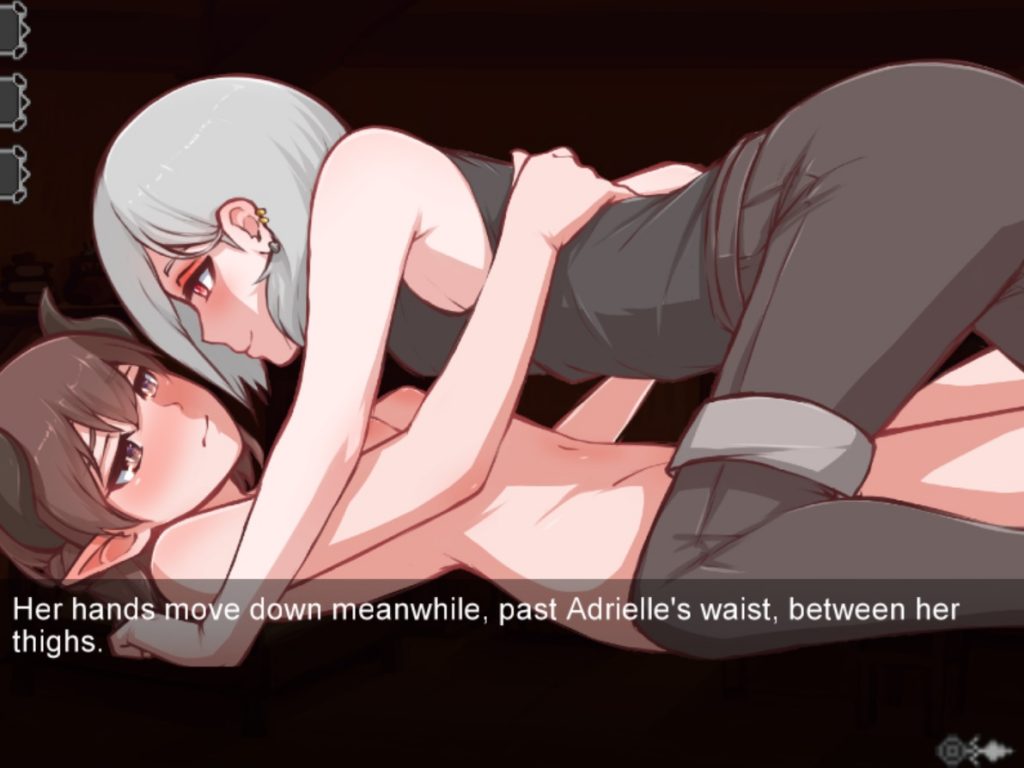 The game has no voice acting. What sound effects there are, are used sparingly, but appropriately. During the visual novel segments, some actions and events will be accompanied by a sound effect.

For dungeon crawling segments, sounds are easier to pick out. Moving your character produces footsteps, and deploying a skill will prompt a minor effect. When I played as Lyss, three out of the four skills made the same sound. Though the game reuses audio clips, the experience felt immersive.

The music for the game combines retro 8bit tracks, pure acoustics, and tracks with a mix of both. There is a fair bit of experimentation in the music department, which I appreciate. The theme that plays during the game’s opening menu is a good representation of what to expect from Devious.

The song isn’t grandiose, kicking off with a laid back vibe created by a combination of violins and synthesized sounds. The rhythm doesn’t speed up or slow down, and plods along with a steady tempo.

During gameplay segments, each dungeon has its own unique theme, which helps sell the atmosphere of the respective areas. An abandoned church has a different song than the dark and foreboding woods. Overall, I found the music enjoyable. The songs were good to listen to an extended time, and lent a feeling of adventure to the game.

Some scenes have their music abruptly cut off. This results in several scenes being silent, with only the sound effects playing. Playing on fullscreen stretches the game to fit the screen. It didn’t fit my monitor size, so I played in windowed mode. 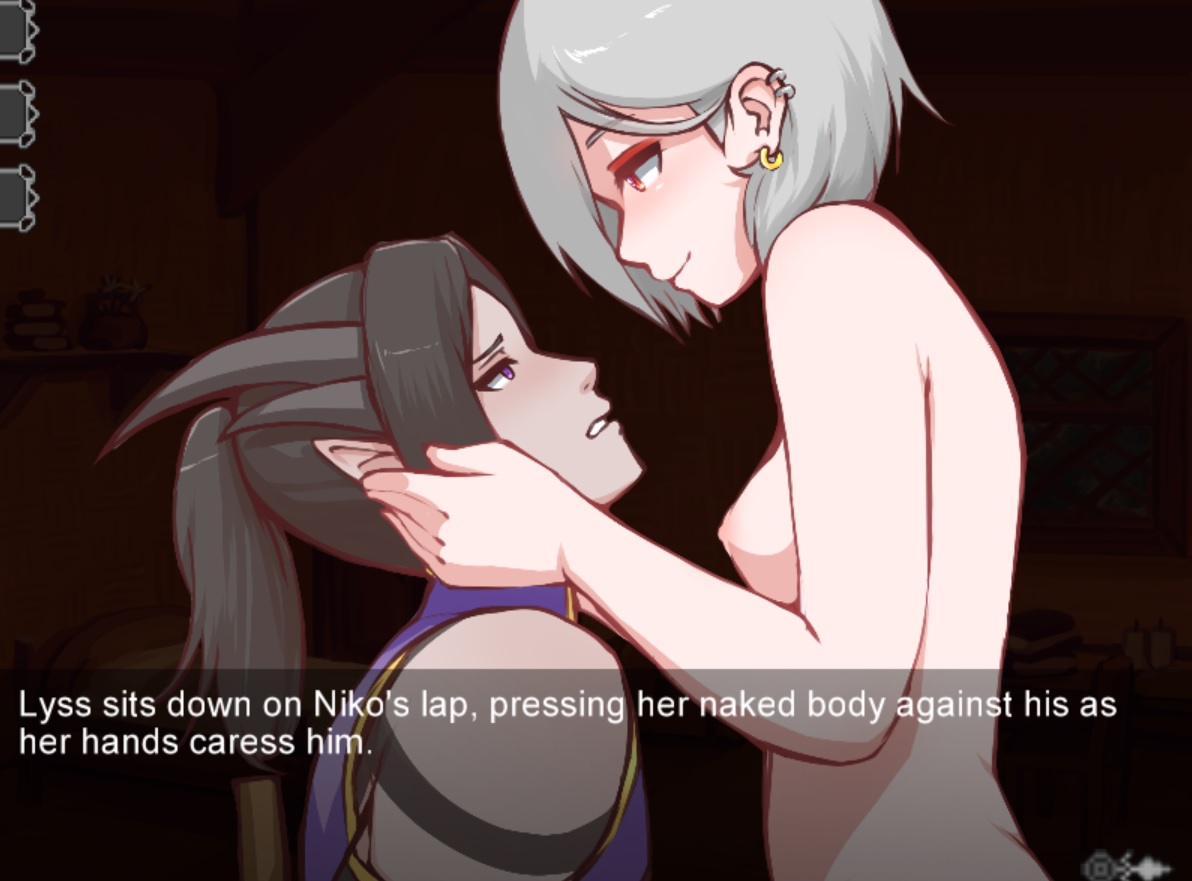 Devious has great characters but a messy story. I enjoyed my time overall, but expected more fapworthy sex. The sex is not the focus of the game, as the political intrigue and character relationship drama hog the center stage. The gameplay includes visual novel segments, dungeon crawling, and some light RPG mechanics.