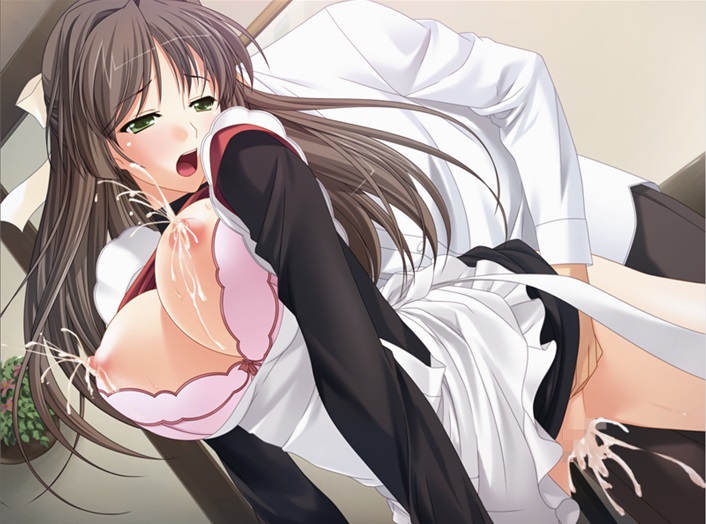 Hideki runs a coffee shop with Sayaka, his late older brother’s wife. Sayaka recently gave birth to a baby thanks to Hideki spending every night running and praying at a local shrine for a safe and uncomplicated pregnancy. On the last night of prayer, he accidentally knocks over a sacred statue and becomes cursed. The only thing he can eat now is Sayaka’s breast milk. Forced to suck his sister-in-law’s tits for nourishment, Hideki and Sayaka must work together to cure the curse!

Hideki is a nice guy who does his best to help his sister-in-law Sayaka with the family coffee shop. Hideki’s brother is the latest in a long line of loved ones to die young. Hideki is determined to keep Sayaka and her newborn safe from threats. He prays at the local fertility shrine, but one day he knocks over a sacred statue and becomes cursed to have a baby’s appetite.

Hideki tries to eat normal food but soon realizes she can only eat Sayaka’s breast milk anymore. Sayaka reluctantly allows him to suck on her big juicy tits. Things soon take a turn for the romantic. The situation becomes more and more embarrassing as Hideki is forced to suck on Sayaka’s tits in the morning, afternoon and night. The two eventually take it one step further and have sex.

Horribly ashamed and embarrassed, the duo find themselves drawn to each other and start having more sex.

Onee-san to Amaero Milk Kissa ~Shibotte Nonde Ippai Nakadashi Shite is fully voiced. Sayaka’s actress does a good job. Even if you can’t understand the language, the music combined with the text and her performance make you sympathize with her plight. There is a strong feeling in the air that she is horribly embarrassed and ashamed of letting her brother-in-law suck her tits. In the sack and after she starts falling in love with Hideki’s cock, the voice acting turns up the sluttiness with her sexy moans. Her performance strikes a good balance between raw emotion and rough fucking.

There aren’t a lot of sound effects. You hear doors opening, bells chiming and footsteps on the ground, but these are stock sounds which makes me wonder why they couldn’t add more. There are several points in the story where more would’ve been merrier.

There are not a lot of songs featured in the game and much of the time the music does not fit the atmosphere it’s trying to set. Often times you will have an upbeat song playing over a very emotional scene, which makes the entire thing feel disjointed. The most commonly used song during intimate scenes involves a slow, jazzy piano and a guitar, plus some soft drum beats. The entire ensemble feels romantic and exotic and something you’d expect to find in an island restaurant.

The rest of the soundtrack features upbeat cheerful music that uses both synthetic and original instruments to create a very unusual noise that mostly plays during the restaurant scenes. The combination doesn’t feel natural but does fit the scenes.

Song changeovers are subtle and do not distract you while playing. Musical tracks are lengthy and loop when a song ends. The changeover between tracks is not very noticeable. Musical loops can become annoying however.

Onee-san to Amaero Milk Kissa ~Shibotte Nonde Ippai Nakadashi Shite is a kinetic novel. Clicking the textbox advances the story. Functionalities include a ‘skip’ and ‘auto’ button for smooth game play. There is also a Gallery menu where you can view all the sex artwork. There are no choices to branch the story into different routes. There are more than enough save slots available.

The game is a Japanese-to English translation project. Preference menus and settings are all in Japanese with only small visual boxes providing you with hints as to what they are for.

The graphics in Onee-san to Amaero Milk Kissa ~Shibotte Nonde Ippai Nakadashi Shite are above average. There are only 13 CG images for the sex scenes, but these pieces include several variants which show a penis going inside a pussy, eyes closing, etc.

Sex CGs are varied and feature only the hottest camera angles. Sometimes a character will say something about the state of dress of another character that hasn’t happened yet in the artwork. It comes across as silly.

The characters are stiff. They have limited movement and facial expressions. Sayaka’s design is sexy with big breasts that receive a lot of focus. Her proportions stay consistent in-between scenes and her face is perfectly designed for creampies. During penetration scenes the camera zoom in to her juicy breasts. Some sex scenes reuse CGs from previous scenes.

The sex in Onee-san to Amaero Milk Kissa ~Shibotte Nonde Ippai Nakadashi Shite is well balanced. H-scenes happen frequently enough that you will always be sporting a boner while playing.

Hideki is all too happy to shove his cock in Sayaka’s pussy and maybe shooting a kid inside her womb. His first scene with Sayaka paints the most realistic picture of a virgin having sex for the first time. After he’s gotten his fill of Sayaka’s breast milk, the girl notices the boner in his pants and allows him to penetrate her. Sayaka has to guide him through the ejaculation process all the while becoming more and more aroused at having her first cock since her husband died. Her moans and pleadings for him to go slower are cute.

In another scene she is so overcome with pleasure at having her breasts sucked that she orgasms on the spot. She insists Hideki to fuck her pussy in the restaurant while the baby is sleeping and they have no customers.

Having a big titted slut by his side, Hideki wastes no time asking Sayaka to wrap those enormous milk melons around his stiff cock and sample his baby milk. Sayaka eagerly obliges and gets a mouthful of Hideki’s milk and falls in love with the taste.

The game makes great use of different kinks to play up the sexual relationship between the leads. They have all kinds of sex indoors, in private, and in the public.

Despite the lowish score – I HIGHLY RECOMMEND people pick up this title. It’s so vanilla but so fappable!