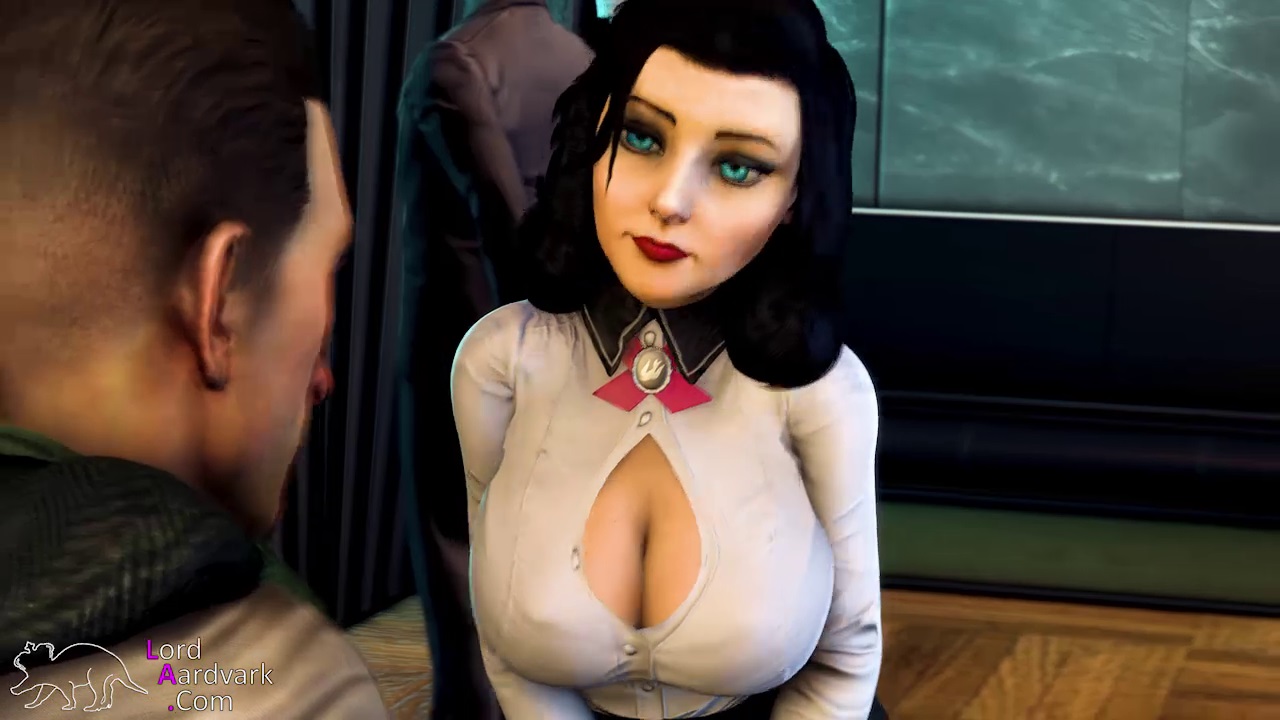 Produced by Lord Aardvark and released November 2019, No Gods, No Kings is a 3D animated short featuring the character of Elizabeth from the Bioshock franchise partaking in some very lewd extracurricular activities after she wakes up back in the ‘Rapture’. The short is approximately ten minutes long. Fully voiced in English. Genitals are uncensored.

Elizabeth wakes up in the ‘Rapture’, a mysterious location where she is greeted by two posh characters who inform her they have no idea how she arrived or what she’s meant to do now that she’s here.

The poor schmuck is hesitant, but after Elizabeth hoists up those big ol’ titties of hers, it’s game over. Elizabeth spends the rest of the animated short shaking her boobs and flooding her baby-making oven with the store owner’s spunk.

The video is incredibly well written with a straight-forward plot. The scenes establish the world for the audience. The dialogue is sharp with loads of sexual subtext, both open and stealthy.

Leo Greystone provides the voice for Shopkeep, a man lucky enough to fuck Elizabeth. Unlike other male voice overs, I genuinely enjoyed Greystone’s toned down approach. He isn’t hammy or over-the-top and his dialogue got a few genuine chuckles from me.

Being an animated short, “No Gods, No Kings” is chalk full of sensible sounds effects that make the scenes feel realistic. Some of these sounds are more subtle and harder to appreciate on first watching. You have easily recognizable effects like the crowds of people wandering around Rapture or Shopkeep driving his cock deep in Elizabeth’s pussy. There’s also more subtler sounds like the realistic fabric movement of Elizabeth’s top as she pushes up her boobs. The audio is very sexy.

The musical score is decent. Most of the soundtrack is copy-pasted from the Bioshock franchise which adds another layer of realism to the short. The musical score also successfully puts the viewer’s mind in a 1920s setting. Songs are not distracting but interchangeable. Musical score is limited and not varied.

‘Welcome to the Rapture’ uses violins and piano to create a claustrophobic melody full of suspense. ‘Burial at Sea’ is a cabaret number which sounds like it’s being played on an incredibly old vinyl and harkens back to the earliest cabaret performances. It’s sung in French and uses slow violins and piano.

‘Harlem Nocturne’ is the only song not linked to the Bioshock franshice. It is a jazzy number that incorporates saxophones, slow piano and other flute instruments to create a classic 1920s noir sound.

‘Lutese’ is an accordion-heavy song that uses slow violins and other flute instruments to make another suspenseful track, akin to something you’d hear in the opera.

Lord Aardvark makes animations using Valve Corporation’s Source Filmmaker. This gives the content a high-quality video game look with an impressive rendering and attention to detail. No Gods, No Kings is no different.

The overall quality is top tier with Lord Aardvark injecting his short with a healthy dose of colour but making the animation feel more like a film noir. The segment has strong colours with shifting levels of detail. The exterior of the Rapture contains few details while Shopkeep’s store is customized to the brim with clothing.

Elizabeth’s boobs are huge enough to sandwich the world’s biggest cock. The model is well rendered. Genitals look normal. The animation has a chocolatey feel. Lord Aardvark employs only the best camera angles so the viewers can appreciate just how much of a slut Elizabeth is. There are enough cuts to highlight to the viewers that Lord Aardvark doesn’t just create animations using looped motions shot from different angles.

Fucking Elizabeth up against the wall is sexy to watch with both characters giving a play by play out loud. The scene is shot from several sexy angles, but the subtle changes such as Elizabeth’s nose twitching or Shopkeep’s dick pulsating adds additional life to the scene. The sex scene is a little short, taking up half the episode.