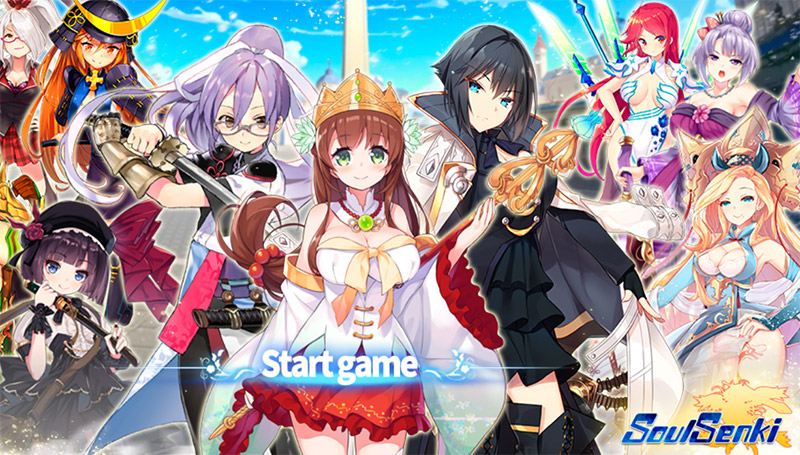 Your father and your friends are murdered and your family home burned to the ground. What now, motherfucker? Who’s gonna pay for the therapy costs? No-one, you let your trauma fester into murderous pyschopathy! Because you commit your body and your soul to the pursuit of vengeance. You are going to hack and slash your way through yakuza thugs and petty gangsters in your blood-crazed search for the men who killed your family. You will amass an elite militia of sexy anime girls and avenge your shitty childhood and sink your penis in them.

The dramatic story was very engaging at the start. It talks about war, persecution, sectarian violence, and magic, then thrusts you into a world where hot young girls are the ultimate weapons. They’re called “Battle Souls”, because “fantasy girlfriends” doesn’t sound nearly as masculine. The souls are bound to weapons of past wars, called artifacts.

After the first few chapters, I lost interest. There’s way too many story events for any of them to feel impactful. You don’t want to read some bullshit dialog contextualizing every single fucking street fight. It would have been much better to have fewer and more impactful story segments, instead of padding, padding, and more padding.

The writing has issues, like the lines will crawl over the text box, there are typos, and missing lines, which are marked as “#NA”. I have no idea, but these two letters with the hashtag appear disturbingly often.

This is absolutely the most gorgeous hentai browser game I’ve ever played. The character designs are so imaginative, the variety is just staggering. The clothes the girls wear are so strange, it’s like the artists were given total free reign to do whatever they wanted. Your first battle soul, Date Mai, is a samurai schoolgirl wearing a short skirt and knee-high boots, and using a gun and a katana. I even found a girl who uses a hula hoop as a weapon, wearing white panties that peek below her skirt. From the gacha, I drew a blonde catgirl wearing a sexy black leotard and boxing gloves. And that’s just the first girls I found during my short review period. The game offers a staggering number of waifus to collect, level up, and fuck.

When the girls fight, they actually look like their artwork, which is featured in multiple menus and screens. Every time you use a special ability, you see the girl’s full body art. That’s an amazing decision by developer, because now the game is constantly stimulating the player, and getting him more invested in the female characters.

The background art is simply amazing. There’s a ton of variety of locations, and the areas just look vibrant and alive. I loved the Japanese city areas, the tropical island, the physical exercise class, all of it. The visual presentation is just pure eye candy with titty cherries on top of the sundae.

Soul Senki is a battle harem game. You can have six waifus at maximum in your team. The girls take turns attacking the enemies, and then it’s the enemy’s turn to return fire. It’s basically turn-based RPG combat, and very simple at that. Normal enemies are just punching bags without abilities, while enemy battle souls will use their super powerful special abilities to really ransack your team.

The game is insanely convoluted with its character upgrade mechanics. You have to maneuver several menus to upgrade the power levels of your girls. Upgrading equipment has its own tab, upgrading a girl’s “tiers” has a tab, upgrading the rarity (star rank) of Battle Souls has its own a tab. And that’s not all! You also upgrade the girls’ skills by spending skill points and gold. Oh, and you’re also giving the girls gifts in the “date” menu, to increase their affection level, which also increases power level. I don’t believe the extraneous complexity achieves anything meaningful.

You can choose which enemy is the focus-fire target by clicking them. There’s also a mini-game that appears every time you activate a special ability. If you score a high grade in the mini-game, the ability gains up to 20% more power. You can set the combat on auto-play, but you’ll want to assume control during the more difficult levels. With auto-play, the power boost of special abilities can be as low as 8%, plus the computer is very dumb about its choice of targets.

Note, you don’t level up Battle Souls by completing levels. In order to become more powerful fighters, your girls have to drink spirit potions, which is a strange out-of-place reference to alcoholism. These girls are hardcore thots living a self-destructive hedonistic lifestyle of sex and ultra violence.

The soundtrack rocks a healthy list of exciting melodies. I particularly enjoyed the Japanese-style music in the main menu, and most of the combat songs. Even the little jingles, like the victory music, have a strong Japanese vibe, played with real physical instruments. Not all songs are joyous to listen to, but the ones that are good, remain engaging time after time.

Soul Senki is free to play. The premium currency “rubies” is acquired in decent quantities in normal play, so much so, that you never feel pay-walled. If you want to support the developer, you may purchase a big bucket of rubies and completely trash the premium gacha. Individual rolls cost less than $3.00 (because you get extra rubies with purchases), while 10 rolls cuts the unit cost to less than $1.50. You are guaranteed to get a combat-viable Battle Soul when purchasing a pack of 10 gacha rolls. That’s about $15.00, take it or leave it.

Soul Senki is the most visually appealing battle harem game I’ve had the pleasure of playing. The monotony of the gameplay can get to you, if you’re playing more than 20 minutes a day. The music, the voice acting, and the graphics are top notch quality. Both newbies and veterans of the battle harem meme will find something to like about this.