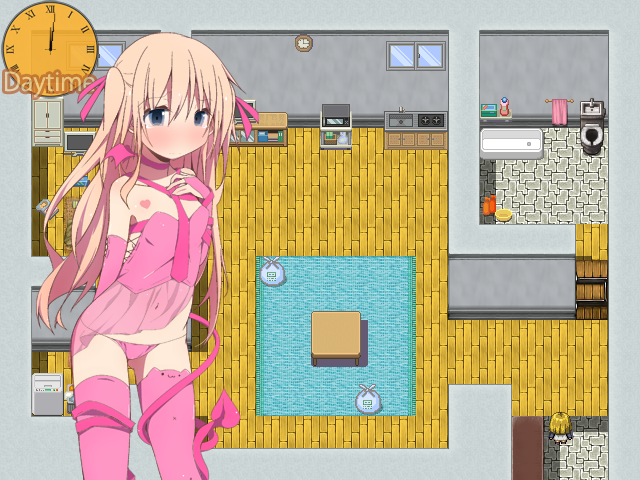 Yui is an innocent and petite schoolgirl who will spend her summer as the new landlord. Her father works abroad, but somehow her mother got pregnant and is in the hospital. Maybe you’ll find out why by talking to your tenants!

You have 60 days to take care of the tentants of your apartment complex. You are expected to perform cooking, cleaning, and laundry duties for the residents. There are nine residents in total. You’ll easily be able to see them all before the timer runs out. The player ending will change based on how corrupted Yui has become. Was she still a virgin? Or did she become a free use whore? You decide!

There are many problems with the writing. The nine residents are all similar to one another. Yui’s mother sounds creepy encouraging her daughter to be a slut. Almost every resident tries to drug or force Yui into sex with aphrodisiacs and lies. In spite of the cute and colorful artwork in the game, this experience is not a happy one.

Yui-chan’s Experience was created with RPG Maker. Press spacebar to interact with objects and people. Press Q to save during dialogue. Press W to hide the text box. Press A to speed up the game. Press CTRL to only speed up dialogue.

Every day you receive rent money that you can use to buy items. These items will automatically speed up the cleaning or cooking for your residents. They make the game even easier, so there is absolutely no challenge whatsoever.

There is no recollection room or CG gallery. And sixty days to meet all the men is far too long. You are guaranteed to see all content but be unable to access the ending until enough days pass.

For such a high price I was expecting more than 12 CGs and a tiny bit of animation. The visuals in this game are so disappointing, it distracts from all the other content in the game.

Yui-chan’s Experience has no voice acting.

The sound effects are mostly standard RPG Maker assets. Some are recycled from previous games by this developer. The regular footstep noise for room transitions is there, but the menu sounds are a unique pitch meant to match the relaxed moments outside of dialogue. There is room for improvement though. A sound effect for flipping pages in a book would have been very much appreciated.

There’s 73 tracks in total, though only a handful are ever used. Most of them loop frequently and are under a minute in length. There is a heavy emphasis on jazz and bass guitar. All music is digitally synthesized and follows simplistic beats. This game lacks emotion, so the music follows in turn, being mostly elevator music in quality.

Yui-chan’s Experience has at least 12 scenes to match the 12 CG artworks.

Some artworks repeat, some scenes don’t have artworks. This game doesn’t have a recollection room for a reason, because most scenes are pure dialogue with the minority including sexual content. Still, when sex does happen, it’s worth the wait.

There is rarely any foreplay. Almost every scene shows Yui being drugged or physically forced into a sex act. It gets repetitive fast, and is unexpected considering how the game was advertised. Although the scenes are nice, they are largely forgettable.