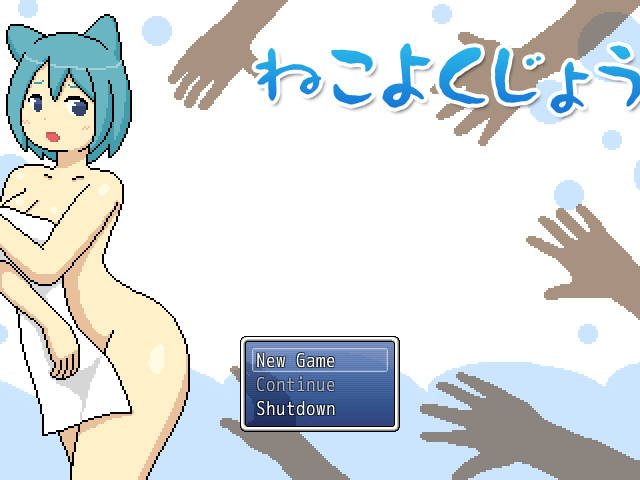 When customers drop money in the public baths, you go in and pick it up! It’s a shitty job, but at least you get to show off your body!

Neko BathHouse was created in RPG Maker VX Ace. Use the arrow keys to move and press Z to pick up coins.

Collect money while running away from customers to avoid sexual harassment. Or run into them and enjoy the show! Some lewd scenes are outside the bath, but they’re all easy to find, so don’t worry about it.

Personally, I found this game incredibly frustrating. It’s easy to get surrounded by men and lose all your money. Makes sense in the game world, but it’s super annoying.

An x-ray view can be toggled on or off at any time. Some players love to see the penis enter the pussy, but others will want to focus on the thrusting and body movements. Sadly, all scenes occur on the righthand side of the screen, and there are no fullscreen CGs to be seen.

Playing the game in fullscreen is known to cause glitches, so it’s better to play in the windowed mode. Honestly, RPG Maker MV is better at handling animations, so the developer should have gone with that instead.

Neko BathHouse has no voice acting.

Many of the sound effects come from the stock RPG Maker library, but many do not. The moaning sounds from the girl and the sexy noises of breastfeeding and pussy pounding are totally fresh and unique to this developer. These sounds bring the scenes to life and fully convey the carnal desires of the men. Truly, the stellar sound design is the highlight of the experience.

There is one background track used throughout the entire game. It’s a digitally synthesized stock track that fits well as elevator music. The primary focus is on the sounds of wet pussy and the girl moaning.

Download Neko BathHouse. If you liked this game but want a male protagonist, then check out our review of I am a prostitute!