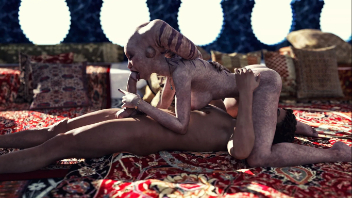 The Warrior’s Heart takes you on an intergalactic space adventure, where you’re constantly bombarded with conflicts that you never bargained for. As your destiny begins to take shape, you and your crew become targets of the Inquisition. You’re on a collision course with the most powerful people in the galaxy in a battle that can only have one winner. As the new fighter pilot on the ship, it becomes your duty to deliver upon the promise of victory.

The Warrior’s Heart is a story based on the Star Wars universe. You travel around the galaxy trying to make a name for yourself whilst learning how to use the force. You begin as an orphan, eager to make your way off your home planet in hopes of finding a better future for yourself. After signing what amounts to a slave contract, you’re placed on the crew of Drea Orican, the company’s most famous pilot.

After quickly acquainting yourself with Drea and her ragtag crew, you’re informed of your duties as a Crew Support Tech (CST). While cleaning the ship, you come across two stowaways and quickly report this to the captain. After defusing this complicated situation, you manage to befriend the two stowaways who decide to journey with you to the next planet. While on the planet, the crew is attacked by stormtroopers who intend to arrest Drea on false charges. After witnessing this, everyone works as a team to fight off the attackers. These actions eventually lead to the crew being wanted by the Inquisitors.

This is a story about fun, adventure, and new experiences. As an orphan, your life has typically been spent struggling and you had to fight for everything you wanted. This struggle shapes the person your character becomes during the story. Your character goes on a character arc that sees him go from ignorant and incapable, to becoming a confident man capable of dealing with high-pressure situations. Your character continues to mature as he experiences many of life’s firsts, such as sex, shooting a canon and committing murder. Your relationship with the different women of your crew changes based on the type of interactions that you have with them. With this, you’re capable of forming varying types of relationships with the women you come across. All characters have complex stories which make them really interesting to interact with. The variety of personalities also ensures that no two conversations ever feel alike.

This genuinely feels like a side story that you could see in the actual Star Wars canon, which is achieved through a heavy reliance on the actual terms that litter the franchise, giving off a heavy sense of realism and authenticity. This, coupled with a typical Star Wars plot of fighting for justice against the inquisition, makes this a truly fun experience. Fantastic characters such as Drea Orican and the ex-Jedi, Kleio, further enhance the overall quality. These characters are not only beautiful but strong, and they constantly impact the ongoing narrative and influence the type of person your character eventually becomes.

The gameplay of The Warrior’s Heart is similar to other visual novels wherein you tap the screen to move the story forward. Throughout the game you’re presented with choices that affect the events. There are also options to redo your last decision, a dialogue-only window, and an option to automatically advance. This game was developed using the Renpy engine. It runs smoothly with minimal to no issues.

The Warrior’s Heart uses 3D CG models that are genuinely some of the best that you will find anywhere. The models are all exceptionally crafted to the point where it’s genuinely pleasurable to stare at them in isolation. Each image and background is crafted to near perfection. This lends itself to interesting character designs that are highly detailed and very memorable. Such characters include Drea Orican and the Inquisitor, Zara. These characters have fairly complex designs which are enhanced by the quality of the models. In some cases, these would have looked cluttered but, due to the clarity of the models, they work incredibly well. The models look good from whatever angle they are presented with proper proportions throughout.

This game is superb at backgrounds, environmental scenes, spaceship designs, as well as weaponry and action shots. The different backgrounds that are employed while the crew is in space are exceptional. The perfect blend of colors makes for really interesting scenery throughout the gameplay. Backgrounds are highly detailed which helps the game feel truly alive. The different spaceships across the galaxy are designed in numerous ways which keep them visually interesting each time a new type shows up. This variety only further adds to the Star Wars feel. Some games struggle with the quality of images during action-heavy portions, however, this game has no such issues. During action scenes, the images look just as good, if not better.

The Warrior’s Heart includes limited voice acting and sound effects. The most memorable sounds include the hyperdrive effect, the sound of blasters, and the sound the lightsaber makes as it turns on. These are welcomed additions but the game would have benefitted from more diverse effects. Due to not adding these effects, the game feels too quiet in places.

The Warrior’s Heart does not include any music at any point throughout the gameplay. Oddly enough, there is an option to enable music in the preference menu but it doesn’t work. This hinders what could have been an even better intergalactic experience.

The most memorable hentai scenes undoubtedly occur with Drea Orican (your captain), Jiljoo, and a random alien you meet on the planet of Ord Mantell. The scene with Drea has been building up as early as your first interaction with her. It’s clear that you two have developed some feelings for each other and, after insistently flirting with each other while on your travels across the galaxy, things finally head for a climactic finish. The scene does an amazing job of conveying the whirlwind of emotions that Drea goes through, as she tries to forget her ex-lover while having sex with you. Not only are the scenes visually memorable, but also packed with emotions that further heighten the tension. After a hardcore session on the ship, you and Drea finally calm down and attempt to defuse a somewhat awkward situation.

The Warrior’s Heart is a genuinely sensational game. The incredibly strong graphics aid the game immensely, resulting in a feast for the eyes. Strong and entertaining characters catch the attention of players as they advance through the story and this keeps them immersed until the end. The structure of the story is easily understandable and mirrors that of an actual Star Wars journey. The lack of a musical score is a bummer, but the overall experience gets my personal recommendation.