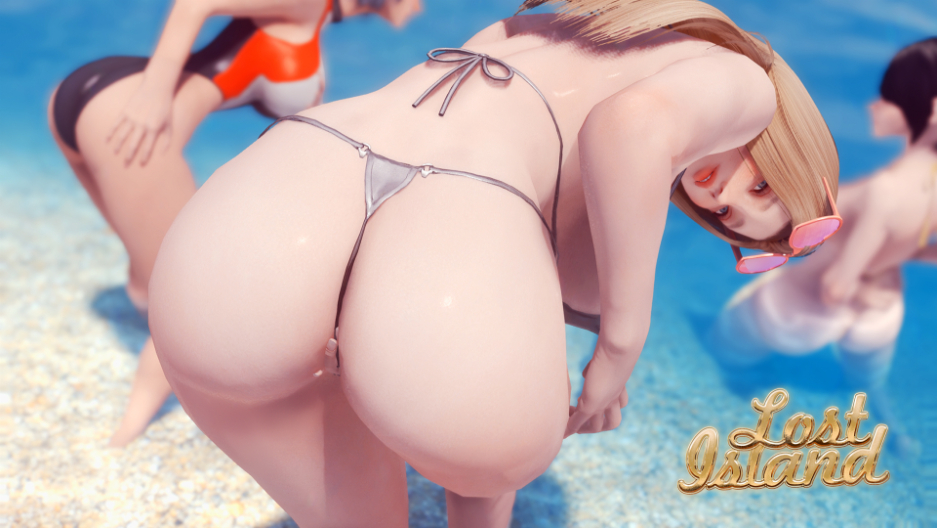 You were a passenger in a horrible plane crash! Exploring the island, the only person you can find is the stewardess named Kagali. Her tits are huge, let’s hope you get lucky!

This review covers Episode 1 of Lost Island. Episode 2 & 3 cost $20, so this review will let you know if it’s worth buying.

You wake up on an island. Do you explore or stay put? Do you pick fruit or leave them? Do you share your food or not? Spoiler alert! The fruit is an aphrodisiac and you have to share it if you want to have sex.

Episode 1 covers your encounter with Kagali. It ends when you meet two schoolgirls named Sakura and Yu. It’s only an hour long experience.

Most of your choices have no effect on the plot. Kagali is not fully conscious until the end of the Episode. And there are multiple typos like “Unifrom” instead of uniform. Altogether this has the quality of a Patreon Ren’Py title, rather than a professional game release. You can have fun with it, but I have to point this out.

Perhaps because it’s a browser game, this software lacks all the hallmarks of a standard visual novel title. There is no text skip or pause menu. Auto-dialogue is activated with an icon in the corner rather than through a keyboard shortcut. Although the text box can be hidden, you cannot hide the UI in the top right corner.

The Erogames premium currency, EroGold, is spent to purchase new outfits. Although you can name your character, he has a personality of his own. During sex, click the icons that appear on screen to keep pace and progress through the scenes. Beyond that, it’s a simple visual novel experience.

As a browser game, it’s designed to be light-weight enough to run on all platforms. Performance is independent of your computer quality. Which means, all of us will experience the same long load times. It gets to the point you may even dread returning to this game, knowing that you’ll be waiting so long for it to start.

While the CG images are high quality, there’s an immediate and noticeable dip in quality for the animated scenes. Rather than using webm files, the images are gifs with a significantly lower resolution than standard images. This means that animations look pixelated instead of enchanting.

The age-old rule of storytelling is “show, don’t tell”. This game ignores that advice. Instead of showing things, the game often fades to black with text that says “Then you did this”. Instead of showing your hard work in building a shelter, it’s all fast-forwarded, which feels rushed and lazy. It took me out of the moment.

The women in this game look like barbie dolls. The way light reflects off their noses. Their eyes never blink. It was uncanny valley, big time. Even in some of the promotional art you can see rigidly squared shoulders as if the only fat a woman is allowed to have, is in her tits. I enjoyed the visuals, but these ladies looked a bit too unrealistic, which may be some people’s preference, but not mine.

Due to the lack of volume customization for voice acting and music, the girls are often extremely difficult to hear. The music is blaring so loud, their voices sound like whispers by comparison. This is totally amateurish and needs to be fixed immediately. Just because it’s a browser game, doesn’t mean you can get away with cutting corners like that.

When voices do play, they’re all high-pitched and soft. I didn’t imagine a woman named Kagali to sound like a typical woman from the UK. Nor did I expect the schoolgirls to sound like Disney princesses. It’s almost cartoonish how off-beat these voices are.

Sound effects are limited but often abrupt. Like when you’re building the shelter, it’s jarring to suddenly hear construction noises when the bulk of the game up to that point was quietly wandering the island.

Soft piano and the sound of ocean waves do a great job of conveying the quiet and peaceful nature of a deserted island. However, the music in general is a nuisance. Either you’re struggling to hear the voice acting, or you ignore it and you just have a general background track in your ears for over an hour. In the music department, there isn’t much to praise.