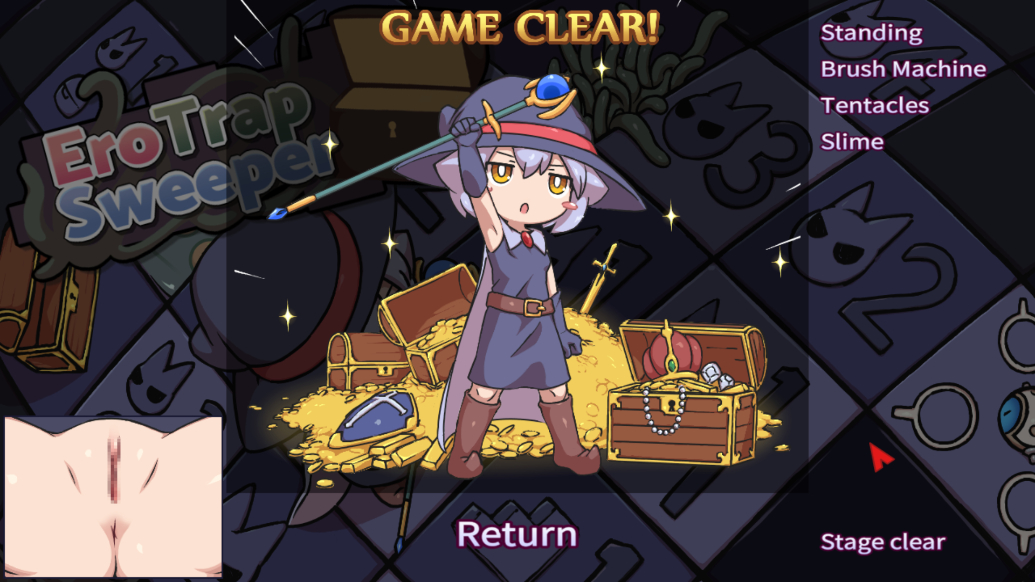 There is no overall story. Even sex does not have any dialogue. When you reach the bottom of the dungeon, you get an image of Lila with a bunch of treasure and that’s it.

EroTrap Sweeper was created in the Unity Game Engine. The entire game is played with the mouse, so feel free to engage in one-handed gaming.

The game is a parody of the 1960’s puzzle game, “Minesweeper”. The game was largely popularized during the 1990s when Windows added it as standard software across all devices. However, younger generations are likely unaware of its mechanics, so I’ll explain here.

There are a number of boxes on-screen. When you click a box, you’ll be given a number indicating how many traps are nearby. So if the number is 1, you know there is one trap somewhere around that box. It could be to the left, it could be to the right. The puzzle is to gradually click more boxes to learn information about where the trap is.

As with all puzzle games, it’s easier to understand when you try it yourself. If you’ve ever played Sudoku, then this game will be easy as pie. It’s all about thinking of numbers as rows and columns.

If all of that sounds too difficult, thank goodness you found this game! The first level is a well-designed and enjoyable tutorial that can be replayed at any time. This game gives a large number of advantages that make Minesweeper less about patience and more about skill.

In this game you only need to find a staircase, instead of clearing all boxes. You have multiple lives, so you can continue if you make a mistake. You can use magic spells to clear boxes without having to risk touching a trap. Many boxes are treasure chests that will restore your health over time. These differences and many more make this a more interactive and fast-paced version of the classic Minesweeper.

Even better, these changes alter the nature of the experience. Sometimes it’s better to continue exploring a floor if you generally know where a chest is. Other times you may want to head directly for the stairs. This is because some floors have tons of traps and others have tons of treasure. This relieves the tension of the exploration while still staying true to the exploratory roots of Minesweeper.

Press left click to move somewhere. Press right click to mark a square as likely to have a monster or trap. There are 30 achievements total, each boosting your stats like giving higher HP. However, many achievements are difficult to unlock, and repeatedly trying to can get very frustrating and time consuming.

From the main menu, you simply choose the difficulty of your puzzle and immediately enter the game. Naturally, this eliminates any chance of complex world design or NPC characters. The protagonist is the only human in the game.

There are about 14 unique CG images. The protagonist is always drawn in the chibi-art style and in the same outfit. Although her belly and breasts can be changed depending on the traps, she generally retains her petite appearance.

While the visuals are pretty basic, relying on a blueish brick background, the artist clearly has talent. The title graphic is downright gorgeous, perfectly capturing an aerial view of 3D space while keeping the art style and proportions consistent all throughout.

EroTrap Sweeper has no voice acting.

The sound effects are limited to small blips for menu choices or trap activation. All sound effects are digitally synthesized and minimal. In all honestly, there are only 3-5 in the game. Opening a chest, getting touched, and taking a step, and a couple others.

EroTrap Sweeper has one track that plays during the puzzles. Everything else is muted, including the title menu. That single track relies on digital chimes and a synth background beat. The tempo isn’t too fast or too slow, so you feel like you can take things at your own pace. I found the track to be very enjoyable and fitting, but some players will eventually get bored of it after playing long enough.

EroTrap Sweeper is the best minesweeper parody game on the market today. With the use of spells, health points, and treasure chests, this title refreshes the minesweeper formula while enhancing the experience via cute visuals.

Download EroTrap Sweeper. If you liked this game but want real sex in your puzzle games, then check out our review of The Fairy Tale You Don’t Know.