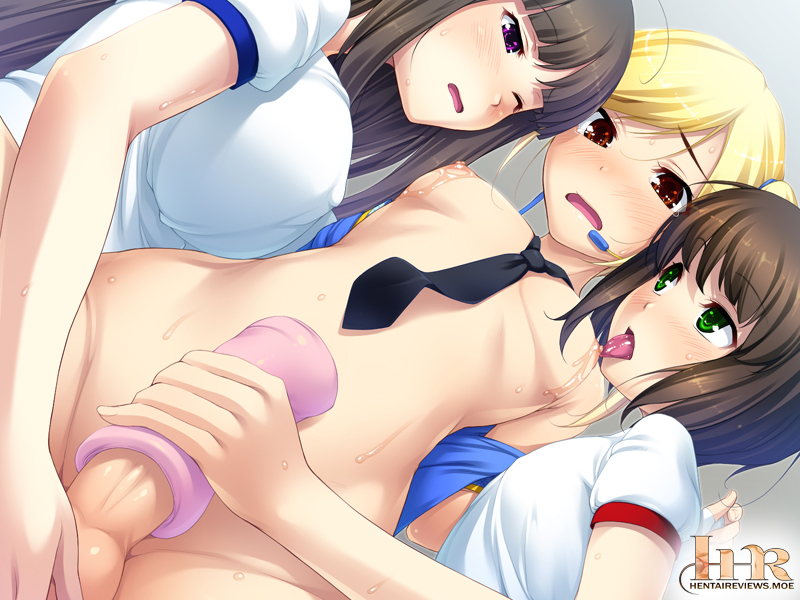 Let’s talk about the ethics of veiling your testicles in white laced panties.

The character art of QT Cool, is Japanese anime style. The boys look hot, with round butts and girly hips, their pubic areas and legs perfectly shaved. If we’re being real, it makes no sense how feminine they look. The artists use camera angles to manipulate perception, and make even their chests look like breasts. Oh, and their penises look ultra gorgeous, with tight foreskin and smooth skin on the testicles. When the boys cum, their white baby cream soils their bodies, it splashes on the floor, they’re wiping it off with towels that can barely absorb the thick stuff. The art in this localization is fully uncensored.

The sprites look like dolls, they’re so perfect. The characters have multiple expressions, enough to convey every emotion relevant to the story. The traps look so deliciously fuckable, like they’re itching for a back-alley ass-rape. During sex scenes, they always wear these cute embarrassed faces, while lustfully jerking each other’s fully erect teen cocks. During those scenes, little details like their faces change, like eyes get closed, penises ooze precum midway to climax. These little details create a sense of progression.

The background art is okay, and fits the game’s school-focused premise. I found the backgrounds too standard to be pleasing to my aesthetic eye. Cheap backgrounds are very common in eroge, it’s the easiest area to cut budget without hurting sales.

Schools in Japan were closing their doors one after the other. Low fertility rates have plummeted the number of young Japanese, and there’s less need for schools. But the teachers want to keep their jobs, so everyone is thinking ways to get their school’s enrollment numbers growing. Then, one perverted fuck came up with a desperate idea: Let’s make a school girl band. Hoard the hottest teenage thots into a single group, dress them like high-class hookers, and make memes about their panties for twitter. The idea became popular, and soon almost every school had their own “school idol club”.

There’s barely any plot. The guys train dance moves, while dressing in women’s gym wear, there’s some short-lived relationship drama here and there. The focus is the porn however, and everything else between those scenes is basically filler. When things start being stale, somebody starts jacking somebody off, and soon jets of semen are flying all over the place. We don’t learn too much about the characters, and the motivations for the main character to suddenly start crossdressing, are flimsy as hell. The whole premise is forced together to create a natural-feeling scenario where two guys explore their homosexual lusts while wearing women’s clothing.

The game has three central characters, and no supporting cast. They are Akaru (trap), Yuki (his trap name is Haruka), and Aya (alpha bitch). I never learned much of the characters and their pasts. Without this knowledge, there wasn’t much depth to any of them. Their personalities were very one-dimensional. Akaru was just a shy trap, that seemed to have some innate need to dress in skirts. Yuki was such a weak-willed beta male, that he was just pulled into crossdressing, seduced into homosexuality, which he eventually started liking. Meanwhile Aya was just a succubus-like character that manipulated everyone into immoral sexual acts, to piss on Christian family values. There was very little drama involving their gender identities clashing with society’s expectations, and no dramatic consequences. All that juicy drama that would’ve made for epic insightful scenes, was swept under the rug. The game treated the characters as cheap porn bodies. If you want something deeper, School Idol QT Cool doesn’t go there.

The music is very light, poppy stuff played with synthetic instruments. It lifts the mood, especially the opening theme. The melody is simple and cheerful, and can easily get stuck in your head. But the soundtrack definitely sounds like something from the 90s, definitely not the current decade.

The theme that plays during sex scenes, is in the style of a city-building tycoon game. If you heard this stuff in any other context, you wouldn’t associate it with crossdressing gay sex. The thought wouldn’t even pop in your head. It’s a very relaxing tune, like nothing immoral is happening, even when the students are fucking each others’ brains out during school time, on the premises. It’s all just fun, right?

The game has 90s style sound effects and user interface, with a certain rigidness present in games of that era. It’s very confusing, because the game was released and copyrighted in 2017 to English speakers. The Japanese release was no later than 2013 according to VNDB.com. It doesn’t detract from the experience, but it feels uncanny.

School Idol QT Cool has great sex scenes. I masturbated to each of them, and blew my load with ease every time. Each scene only had one slide though with plenty of alternates. The art quality was high, but it’s still a bummer they didn’t add more images to the sex scenes. I imagine they abstained from adding more slides to cut costs. It’s impossible to criticize a studio for doing economic decisions, given that they released a game for the tiniest niche audience, with full voice acting to boot. When you think about it, the grim reality is that the number of people who will ever play QT Cool, will be some thousands of people. That’s the fate of niche games: You’re gonna be a fan of them, virtually alone.

Cunt Wars: Bastet Gets Equality in the Ass