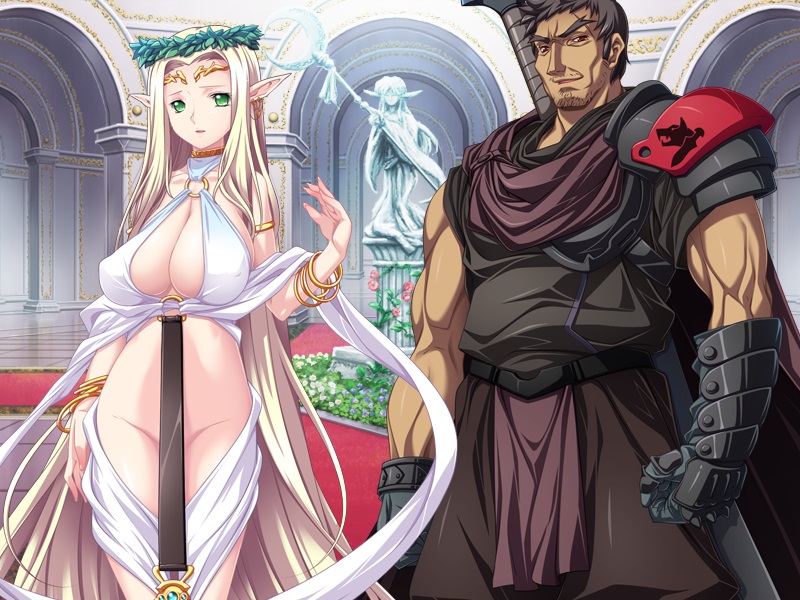 A dark medieval fantasy erotica, Kuroinu is a visual novel series with three chapters in total. All the chapters have been officially released via commercial channels in the English speaking market. The thid chapter continues the tale of the mercenary Vult, as he establishes his own ultra patriarchal nation based on the principles of rape culture.

The dark elf queen Olga has waged war against the southern kingdoms for hundreds of years. As the kingdoms grew tired of getting fucked in the ass, they launched an alliance. However, instead of uniting under one banner to take the war to the north, the alliance leaders decided to employ a group of mercenaries to defeat the dark elf queen. They hired Vult. His battle-hardened army effortlessly demolishes the ragtag band of monsters defending Olga’s castle.

Soon after conquering the citadel, Vult declared war against the southern kingdoms. Assisted by multiple betrayers within the Seven Shields Alliance, the mercenaries conquer each fortress and capture the luscious princesses.

Vult declares the birth of a new nation: Cuntry. The law of the land is that women must service men sexually. The girls are turned into prostitutes, their holes sold to the highest bidders.

Maia is a strong and independent female mercenary with a heart of gold. After Vult punches her in the stomach and captures her, she gets prostituted to a perverted nobleman named Michel who uses magic to dominate her.

Lulu is the feisty halfling princess. Her superior womb gets turned into a seed bed for disgusting bugs. She also gets gang raped by men and monsters until her pussy is too stretched to get off on tiny dicks.

All the rape victims are legal cartoon girls of 18 years of age at minimum.

The CG artwork is way better than the character sprites. The contrast in lighting, and detail, is enough to make the sprites look cheap in comparison. The images of sex have been gracefully colored, with gorgeous shadows providing a sense of shape to the bodies. The sprites have several poses, a few sets of clothing, and multiple faces. Even scenes that depict disgusting things like insects raping women, the content looks so good, you will rub one out. I had high hopes for Celestine’s storyline, which was reserved for this third chapter. However, the scenes focused almost entirely on her boobs. She was fucked in her nipples, she gave paizuri, the lactation fetish was covered, it wasn’t my cup of tea. Her visual design was still boner-popping.

Kuroinu is a visual novel. Click the screen to turn the pages. Multiple save slots let you save your progress.

The game let me choose which castles to raid, accompanied by two sex scenes with the girl. After Vult wins the war, you get to choose which babe to put up for slave auction. Each option includes a sex scene for the chosen girl. Consecutive scenes get increasingly more depraved, so keep picking the same girl to see her broken.

The music is dark and edgy, befitting of a medieval princess rape scenario. I enjoyed all the tracks, including that chill song that played during dialog songs. The casual songs in eroge are usually the ones that fail to set the mood. The soundtrack provided the freaky ambiance that made this edgy story come alive. The songs were great, with plenty of variety for the sex scenes as well, though none were particularly erotic. I almost felt like the music was working to kill the emotional side of the scenes. Kind of like how the songs played in night clubs are often cold, synthetic beats without singing.

After listening to the songs throughout the three chapters, they’re starting to grow on me. Each track fits its context, and brings the right mood for the occasion, be it rape, or guys talking about rape over drinks.

The voice-acting is professional-tier Japanese quality. The actresses somehow completely immersed themselves in their roles as victims of rape. Every embarrassed gasp and sound of protest, they utter in a sexually enticing manner. Maia’s voice acting was the most enticing for me. She was such a hard-boiled alpha bitch, that when she was forced to eat gallons of semen from her rapist, the actress was going bonkers spitting and gasping. I was reminded of Naomi Evans from Kangoku Senkan. It’s a sadistic pleasure to watch a man-hating bitch struggle to gobble cock.

Note, there’s an occasional censorship bleep when the girls talk dirty; the words for genitals are censored.

The trick that makes these crazy rapey scenarios enjoyable for a mass audience is that the sex is hyped as non-consensual, but there’s barely any violence involved. If the writing was changed, there’s not really any visual cues that make the sex look any more terrible than a normal video of consensual group sex. The circumstances surrounding the sex scenes are dark and edgy, but the women are not harmed.

Review was cool but keep the fact that you’re some beta male on the internet who obsesses angrily over feminists to yourself lol. Not everyone acts like a virgin victim. I’m here for game reviews, not gender politics