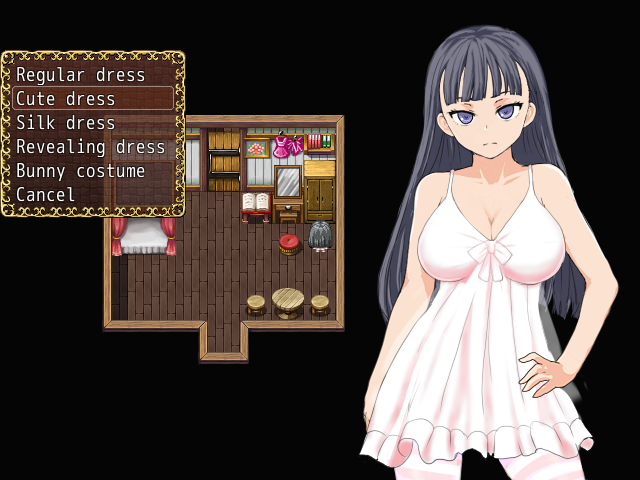 Claire was the heir to her family’s fortune. One fateful day, her father was murdered and the money was stolen. Left only with debts, she is forced into prostitution to pay off her family’s debtors. She hopes to one day discover the truth about the murder of her daddy. In the meantime, a long line of men are lining up to fuck her all night long!

Poor little Claire is a high-status female virgin, and completely inexperienced in the art of seduction.

Once the daughter of a nobleman, now a common whore, Claire loses her priceless virginity to a client at the brothel. After a few lays, she starts thinking. She has the option to make small amounts of money here and there sleeping with the average men. But, the big money is in learning the art of seduction, and raising her sexual market value. She strives to become attractive to high-status males with deep pockets!

Inexperienced in sexual matters, Claire watches men and women interact at the brothel. Combining her observations with the skills she learns while sucking fat working-class dicks, she learns how to act like a sexy, desirable woman.

With the help of this nobleman, Claire discovers the identity of her father’s killer. Sadly, this doesn’t absolve her of her father’s debts. All she gains from learning the truth is peace of mind to continue her whoring.

The story ends with a charming young man falling in love with Claire and helping her save money to pay off all her debts within a year. They marry and Claire lives happily ever after, no longer the prostitute of Magmell.

Prostitute of Magmell was created with RPG Maker, and is very simple to play. You move with the arrow keys and press the spacebar to interact with objects and people. Press CTRL to skip dialogue.

There are ten sex scenes representing the ten missions you have in the game. Once you unlock every sex scene, the game is over and you are placed in the recollection room, like an imprisoned soul in purgatory.

As a prostitute, Claire is rewarded with sex when she seduces a man and gets him into bed. After sex, you’ll receive money that can be used to purchase new outfits for Claire. There are five outfits in total. There are seven men at the brothel. Each man has his own taste in outfits and will only go to bed with you if you raise his affection points to the maximum.

During dialogue, you are given different choices that the man will either like or dislike, and can drink alcohol to affect the flow of the conversation. There’s also games and different forms of flirtation.

The game cycle: Find out what clothes and attitude the customer likes, then act accordingly so he’ll hire you for a wet night of passion. Afterwards, talk to people around the brothel to unlock more dialogue and men to seduce.

The art is traditional Japanese anime style. Bulk of the game you’re looking at Claire’s luscious young body getting her daily filling of cock. She’s a fairly attractive long-haired woman with a piercing gaze.

The entire game takes place in the brothel. All textures used in the environment are standard to RPG Maker assets. Anyone could download RPG Maker and produce a game that looks like this with no practice or ability.

The 10 sex scenes in the game are decent fap fodder, but generally very plain. If you dislike Claire’s design you will dislike this game, as every sex scene features her face and body. Her male partners and the surroundings received little love in the drawing phase.

Because the game takes place entirely inside of one building, there is little to no variety in presentation throughout. The third floor has a red carpet, the first floor is a typical wood flooring, and the lower level has a restaurant and dance club aesthetic.

There is nothing special happening in terms of shadowing or colors. It is blatantly obvious the creators put more emphasis on the story than the visuals of the sex scenes.

Prostitute of Magmell has no voice acting.

There is nothing unique about the sound effects. They are generic audio clips you can hear in virtually all RPG Maker games. The sounds are unrealistic, of course, because ejaculation for example shouldn’t make a sound. But, the audio clips serve their purpose and give you an idea of what is happening in game. You can hear when the penis is inserted, you can hear the sounds of sex.

The soundtrack has 55 songs, most of which are stock music that come with the program used to make the game. You would think a soundtrack this big is fantastic, but the vast majority of songs are never used!

An unsual quirk to the game’s music is that it persists in all scenes. Normally games change to an upbeat, excited tune during sex, to convey the intensity of emotions associated with genital contact. The game retains a quiet piano track which matches many different scenes. For example, there’s a scene where Claire is completely disinterested in sex with her client. The soft piano works perfectly in this scene. She takes the dick from behind, spaced out and bored out of her skull.

Although Claire works in a brothel, the business pretends to have a level of class: There’s always the soft melody of a piano playing in the building. It’s an almost melancholic melody that really sets the tone for the tragedy of Claire’s humiliating dead-end life. If only her daddy was still alive to take care of her…

One particularly kinky scene was when a nobleman paid for Claire’s time. Instead of having sex with you, he paid the girl to have sex with a crowd of men he wasn’t part of. Maybe that was his fetish, to feel in control of a woman, dangling money at her and watching her degrade herself for just a speck of his uncounted wealth.

No contraception is used throughout the game. This is referenced on multiple occasions. When the author falls in love with Claire she outright states, she may be pregnant with another man’s baby already. We never see anything come of this. If there was even one impregnation scene or even a text box verifying she got pregnant, this game would be ten times better!

There are plenty of scenes to enjoy. Claire starts out as an inexperienced virgin, but learns the ropes quickly. Eventually she learns to seduce men. She starts playing coy when they ask for sex, just to arouse them further. Some customers rough her up and don’t even pay her after creaming her womb to the brim!

The game has an alternate ending to the happy one. Complete the story mode and you unlock it!