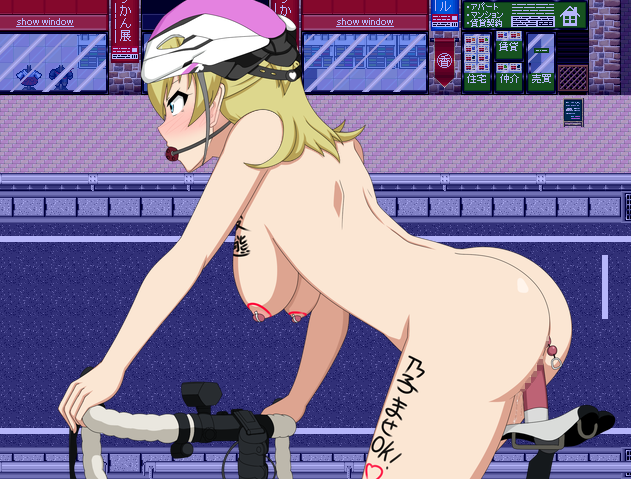 Roza loves riding her bike. After some nasty cyclists comment on her big ass, Roza is too mentally fortified by his great relationship with his patriarchal father, she doesn’t develop an eating disorder. Instead, she takes a look of her butt in the mirror. She gets a kinky idea to show off her ass around town, like a common whore.

Roza’s daddy bought her a $3,000 dollar bicycle. Since then, Roza has been riding around town. But when a group of cyclists loudly comment on the size of her plump, feminine ass, Roza gets triggered. She wants to show off her assets just a bit more, to see what will happen.

Flash Cycling was created with RPG Maker. Press spacebar to interact with objects and people. Press SHIFT to run or move faster on your bike. Simply tap SHIFT once while cycling to increase movement speed.

Simply bike around town to increase your cycling skills, then enter in races to win prize money and bike upgrades for the future! It’s possible to become the best female cyclist in town without ever having sex.

The main story runs independent of your biking races. The plot follows Roza’s slow corruption into a total exhibitionist flasher! Travel to special locations on the map to unlock new events and abilities for Roza, then use those abilities to lower your stats. This will trigger new events.

The recollection room is at Roza’s home. There, you can find maps that reveal the locations of new events. I don’t recommend cheating like this, as the fun is in riding around shirtless looking for events.

You can teleport to any areas from the pause menu. Teleporting saves time but robs you of cycling experience points. Enter amateur races, and official races to earn new bike parts and level up faster.

The art style is a cartoonish variation of the Japanese anime style. There are very few CGs, but the few that are available are good ones! The game world is populated with unique characters and textures. You can ride your bike from the industrial sector to the residential areas, and all through three large mountain paths.

The game has inconsistent frame rate at the starting areas. The developer clearly used RPG Maker because it’s an easy access program, even though the engine is bad at handling multiple moving NPCs. After about 15 minutes of play, the game functions smoothly with no further hiccups.

Flash Cycling has no voice acting.

The sound effects include standard RPG Maker assets and recycled audio clips from the developer’s previous titles. As the game is centered around bicycles, you’ll be hearing chains, wheels turning, and other biking audio.

Flash Cycling has 12 base CG events and 20 cut-in events.

The twenty cut-in events feature images of a character plastered on the game screen. The background is the game world. These events usually occur when someone is groping Roza.

My favorite scene was late in game. It was a “body painting competition”. Roza goes out completely nude with clothes painted on her skin!  Too bad it starts raining, and all the paint washes off! Soon, everyone in town has seen her biking naked through the rain! This game just might be the ultimate exhibitionist experience.

I highly recommend this title to flashers and perverts of all types! Download Flash Cycling. If you’re interested in another game featuring public sex, check out our review of Civilian Justice League.