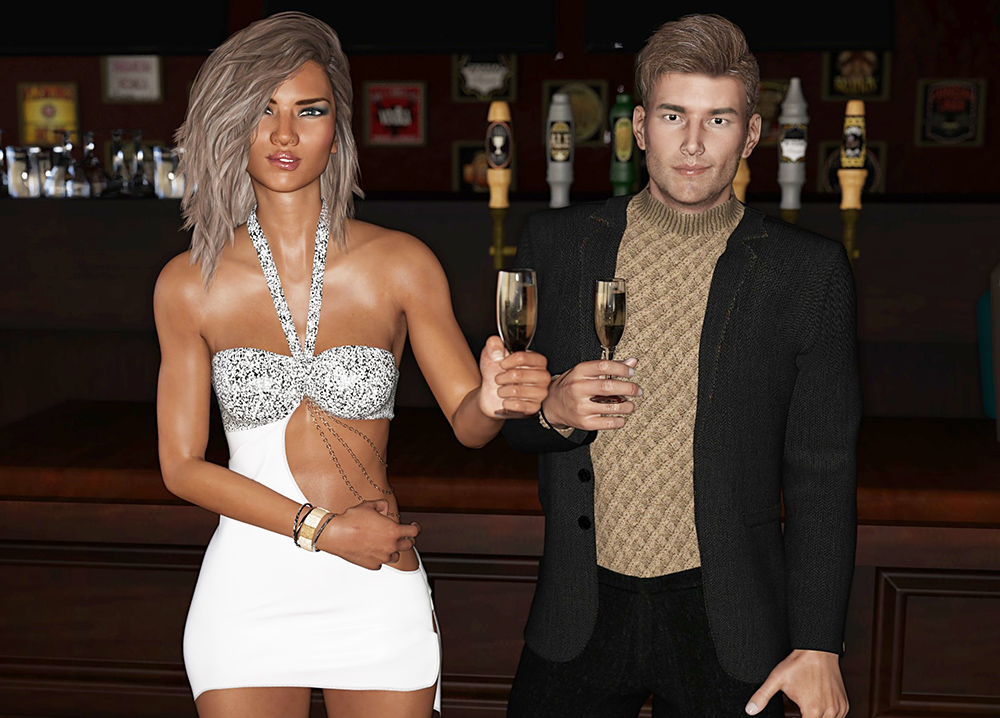 Looking to spice up your sex life, you and your wife begin exploring the market for dicks and pussy outside of wedlock! The journey begins with baby steps. Soon you’ll be sharing Anne with any man who wants her!

You have a gorgeous wife and the perfect job. You are an adventurous couple who loves sex!

The game was released in December 2017, but has gotten gradual updates to the story over time. As of December 2018, there are nine chapters to the story. Each chapter focuses on a different guy your wife seduces.

You can have your wife wear skimpy clothes around your father, you can send her off to public areas without panties. There’s no overarching story, just a lot of small stories added with every update.

The Adventurous couple is a visual novel. You click the screen to advance the story. The game presents you with many choices, which directly influence which scenes you’ll unlock. Multiple playthroughs are necessary to see them all. You can save your progress at any point into multiple save slots.

The visuals in this game are 3D CGs created in the Daz3D engine. The creator has been able to produce hundreds of 3D images for a staggering number of scenes

The clothes used in the game were created by other users of the engine. Daz3D maintains a marketplace for user-generated assets. While plenty of assets are not original creations of the developer, the art looks good. The human proportions on the character models are realistic, though suffer from the same problem as all Daz3D creations: The models look too perfect, and don’t feel like real people.

There are roughly five sex scenes with animation, but they’re buggy and not well done. One in particular has your wife’s head turn backwards like a possessed demon. Scary!

The developer has been creative in how he produced scenarios and environments with the Daz3D engine. From tropical hotels to the mall, each setting is distinct with its own recurring characters to meet and greet. Although the character models look too shiny to be real, the realistic 3D world around them is just beautiful.

The Adventurous Couple has no voice acting.

Most of the game takes place at the player home, so there isn’t much opportunity for heavy sound effect use. You change clothes, click on the computer, sit down in a chair. The sound effects are very few.

The Adventurous Couple has no musical score.

With at least 40 lewd scenes in total, this game has some varied and high-quality content to explore! Most scenes have plenty of build-up that gets you excited for what’s coming! Your character might be thinking kinky scenarios in the morning, which he later suggests his wife should explore. The extensive setup and foreplay builds up your desire and makes the eventual sex that much more exciting!

The Adventurous Couple is the best hotwife visual novel available for download today. The scenarios are super varied and the writing is fantastic! With elements of corruption and voyeurism, this title is fun for one-handed players of all stripes! The game is supported by Patreon backers and legally free for the rest of us.