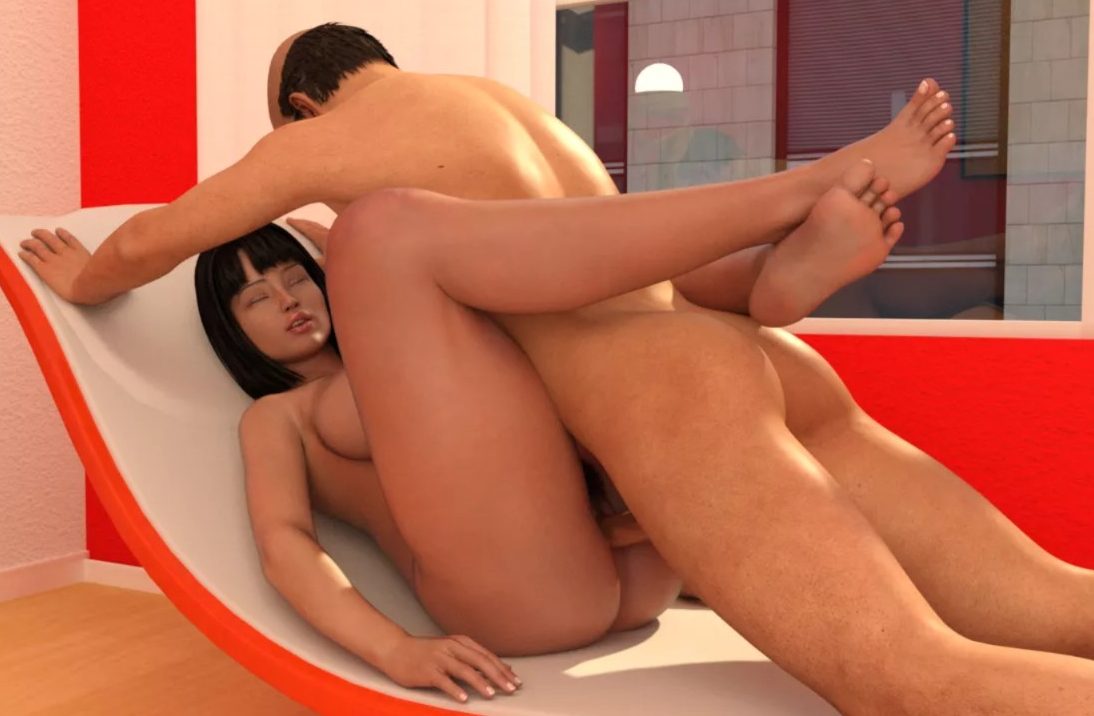 Lily and her husband Nick have been happily married for years. Lily’s life is changed forever after a chance encounter with a hypnotist! This man unleashed the cock sucking whore in her!

The story follows Lily’s life as multiple men sexually harass her. Slowly, she lets them go further. Your choices determine how quickly Lily will be corrupted into a careless cheating wife! The game has hundreds of optional side stories. The main plot is very linear. The game was first released back in 2016, but is still being updated to this day. As of 2019, there’s over eight hours of gameplay and over two thousand 3D images total.

The events of the game take place over the course of months. Each day is full of unique possibilities for events, some of which turn sexual! There’s also lots of mundane events that don’t turn sexy, like visiting an old lady during the weekend, or going to work to get sexually harassed.

This game is a slower-burner that keeps you immersed in its world.

The game lacks an overall plot, but the foreshadowing keeps you coming back for more. Like when you sit in a bathroom, you discover a glory hole in the wall. No-one is on the other side, at least not yet. It makes your imagination go wild with anticipation, because you know there’s a glory hole scene waiting in a future chapter! Most events get ample setup before the intercourse, like the cosplay event, and the pool party event.

Many scenes can be skipped entirely by making the right choices. You can resist Lily’s corruption, if that gets you off. When you visit a gynecologist for example, you can choose between Dr. Adam or Dr. Bertha. The male doctor will harass you, the female doctor won’t.

The game was created by non-English speakers, but they hired a person on translation duty. The English writing in this game is decent quality, and dialog is easy to understand.

Lily of the Valley was made with RPG Maker. Press ALT to skip dialogue. Press Q to see your stats. Press the right mouse button to hide text boxes and oogle at the gorgeous imagery.

There’s no quest system, no clear progression map. If you skip dialogue, you’re going to miss important information, and get stuck. Many times, I had to load an older save, because I wasn’t paying attention. A hint system would improve this game dramatically.

Be sure to save your progress often, as the game can crash on you.

While the game is a long one, much of it is filler content. You change outfits multiple times a day, you shower and use the toilet, go to work on weekdays. It’s a repetitive cycle that can get tedious.

The gameplay does not offer much freedom. Characters will tell you where you have to go. You can’t even choose to sleep until the day is over. Outside of dialogue choices, you have little freedom.

The game is a visual novel with an open world setting. You can unlock new parts of the town, which open new opportunities and gameplay features. You can move between town districts using a taxi-cab service, which you’ll unlock eventually. You also get new walking animations and outfits for Lily to wear.

Outside of the CGs, the game is pretty mediocre. The RPG Maker pixel graphics severely clash with the 3D aesthetics. Lily’s pixel sprite looks like an old man with gray hair. There’s also a feature to turn on walking animations for Lily’s 3D sprite. A good idea in theory, but terrible for this engine. The feature creates a 3D animated image of Lily walking right next to her sprite. The problem is, the RPG Maker engine cannot handle showing the entire city and an animated CG simultaneously. The game drops to 15 frames per second. Luckily you can turn off this feature to avoid the frame rate drop.

In spite of the flaws, the overall graphics are pure eye candy.

Lily of the Valley has no voice acting.

The game takes place in an American city. The sound effects are standard stuff you’d expected to hear in an urban environment. The door bell makes a clichéd “ding dong” sound, the phone goes “ring ring” when someone calls. When anything metallic drops on a hard surface, you get a “clank” sound. The sounds are varied and fit into the world, but the opportunities for sounds to play are few.

Lily of the Valley has 105 songs on the soundtrack, most are standard assets from the RPG Maker library. This means generic digitally synthesized violin with a drum beat in the background.

As the game has a hypnosis theme going on, some songs are quite mysterious. It’s almost reminiscent of a Harry Potter movie. You have background piano with a chorus on top, meanwhile a cymbal keeps a sense of tension. The sound of each instrument creates a mythical, magical atmosphere.

The story is a slow-burner that builds up the sexual tension with ample foreplay. Lily doesn’t start jumping on dicks until she’s all warmed up. Once she’s all wet and ready, the action gets steamy.

The most memorable scene for me was when Lily went shopping in a supermarket. A strange guy followed her around. It’s only later that you learn the strange man was taking photos of her panties! He slipped his camera under her dress, took the photos, and posted them online for the husband to find!

Based on the advertising, the game is supposed to include impregnation content, but I’ve never found it! Did I miss a side quest? Did I make a bad decision? Where is the impregnation I was promised?

The game has no recollection room as of time of writing, which makes it difficult to revisit old scenes. This feature might be added in the future. Join the funding campaign if you want to influence development.

Lily of the Valley is a large-scale cheating wife game, the biggest I’ve ever played. It has mountains of dialogue, hundreds of unique characters, an enormous city to explore! There’s more sex scenes in this game than in most commercially available releases, thanks to dedicated backers on Patreon.