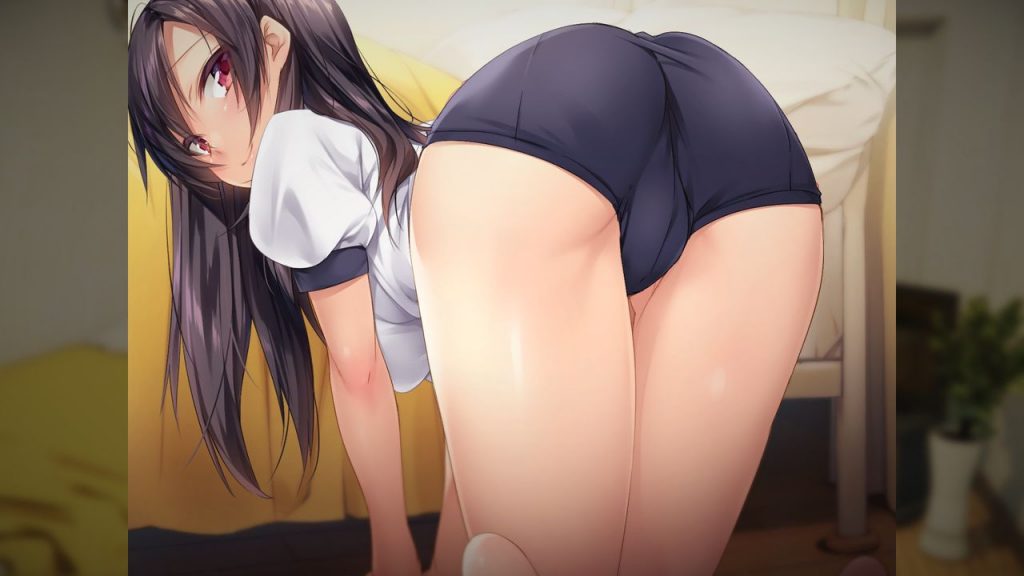 You have the chance to live with a beautiful young lady who wants to love you and suck you dry. Can you make this relationship last? Or are you doomed to be roommates for life?

On your way home from work you meet a beautiful girl named Yuu. She wants to live with you for a week. She’s very secretive about her past, but if you give her a chance to open up, this relationship will surely blossom!

You’ll eventually learn that Yuu’s parents died in a car accident, and she was living with her aunt and uncle who hate her. The game begins as she runs away from home, hoping they will come look for her. They don’t.

Unloved and unwanted by her uncle and aunt, Yuu asks to live with you permanently. This only happens if you treat her like an absolute gentleman during the first week, and have 100 energy to go look for her after she leaves.

The rest of the game is a linear romance love story where she brightens up your boring life and gives you endless love and sex. Your very first choice is “Rape her” or “Pat her head”. That’s pretty much this game in a nutshell.

By the end of the game, she’ll be your devoted waifu who waits at home naked, eager for your arrival.

One Room Runaway was created with the Unity Game engine. You use your mouse for almost all game functions. Press CTRL to skip text. Press Spacebar to fast forward. Right click to hide the interface. Scroll up to see your text log.

This game absolutely requires a walkthrough at certain parts, and many features are unexplained. For example, click on Yuu’s head to pat her hair and earn love points. Frankly, even with a walkthrough, this game is a slog.

The game itself is incredibly simple. Talk to Yuu and purchase items, eventually the story will continue. Do not expect tons of exciting sex. This game is a slow burn romantic story of a girl who is slowly falling for you.

If your love stat stops rising at 70, or you experience some other issue, consult a walkthrough.

The art is a variation of the Japanese anime style. The art is fully 3D, but far from perfect. The girl is drawn with a triangular mouth many times. This cartoonish style conflicts with the 3D visuals.

The girl’s eyes are enormous, but they change depending on the scene. The scene where she’s in the bath house shows her eyes stretch to her ears. It’s completely insane and super funny to look at.

If you can look past these flaws, the artwork in this game is gorgeous. Each scene is a 3D anime CG, with tons of attention given to light sources and sweat marks. The realism gets to a point you sometimes forget you’re even playing a game.

Yuu has numerous outfits and hairstyles to choose from. At first she’ll resist certain outfits, but by the end of the game, she’ll sit around completely naked if you just ask!

At least for the first hour or two, unique sex scenes are spread out and occasional. Meaning, most of the game will be spent looking at Yuu inside the yellow apartment. Dialogue indicates you were supposed to be able to decorate this place, but the feature never appeared in the final game release.

One Room Runaway has partial voice acting. Certain phrases and special scenes feature unique lines from a young Japanese girl. I don’t speak Japanese, but I found her delivery believable. She never speaks fully voiced sentences, but the partial lines give a voice to the face.

This game makes very heavy use of atmospheric sound effects. You have bustling trains, passing cars, drops of rain, and even quiet footsteps! Every scene in this game is carefully crafted with unique audio to match.

The soundtrack includes a handful of songs. During dramatic dialogue out of your control, the atmospheric music takes over. During regular gameplay and sex scenes, you hear the actual soundtrack play.

The music changes as you progress through the game to indicate the shift from a budding relationship into a devoted, loving home life. With soft guitar strums dominating the soundtrack, the comfy feelings are prevalent.

Because this game lacks an overall story, it can get tedious fast. Gameplay takes place in that yellow house, which always has a single track playing! It’s a fantastic track, but after hours of playing, you wish for variety.

The instruments included are the guitar, violin, and piano. The music is simple and down to earth.

One Room Runaway has close to 18 sex scenes, spread thinly throughout the entire game.

Sex can be had from the moment you start the game, but don’t do it! During the first week, you’re practically punished for having sex with her. The game encourages you to build a relationship with the girl first.

All sex scenes are cut-in images rather than full-screen CGs. This gets irritating, especially with certain sex positions like the piledriver. I want to see her legs wide open waiting for cock, but instead I can only see her face! I understand the focus on romance, but come on! I want to see some dick-in-pussy action!

Yuu is a virgin when you meet her, and you’ll have to randomly deflower her to continue the game.

If you see a pregnancy image in advertisements for this game, remember that it’s a false flag! The pregnancy is a dream sequence only, and it’s impossible to actually impregnate the girl.

I recommend this game to fans of romantic stories. Download One Room Runaway Girl.