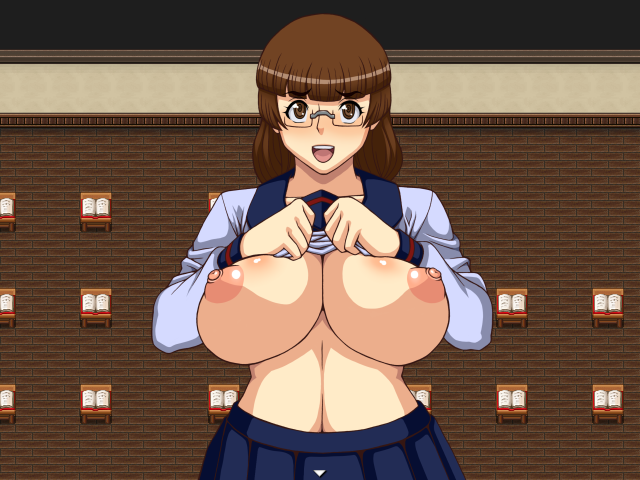 While the lack of story keeps the focus on sex, it’s also very predictable. Miko is not exactly a deep character, and nothing bad ever happens to her. Yes, the janitor puts a roofie in her tea, but she ends up loving and enjoying her sex with him anyway. It’s so peaceful, there’s nothing pushing the plot forward.

Miko’s Sexual Adventure was created with the RPG Maker game engine. After the prologue is finished, you can press Q to skip dialog. Press W to hide text boxes.

This game is an exploration title. Walk around town to find men who want to corrupt Miko. At first she’ll wear a bikini to model it, but soon she’ll be doing a naked livestream showing off her plump tits to thousands of fans!

The gallery is in the player bedroom. Sleeping in bed will change night to day, which changes the available scenes. While early game has more daytime scenes, late game has more nighttime scenes.

Admittedly, the gameplay is very bland. Walk over here, walk over there. Using a walkthrough the game could be completed in two hours. If you take any longer than that, it’s because you got lost. And without random encounters, the sex stats will be the same at the end of every playthrough.

The art is in Japanese anime style. Miko Urikobarami is the main character, though there are a handful of scenes with Miko’s mother.

There are 25 CG images spread across 65 scenes, including 8 livestreams, 4 massages, 4 cases of nude posing at a cosplay convention, the list goes on.

The game world is huge. The town has a variety of zones styled to be residential, academic, pleasure, business, and more! The train station is my favorite area, and I wish there were more groping scenes there!

The character sprites in this game are surprisingly unique. Rather than use the standard box-like RPG sprites, these characters have legs and unique hairstyles. You might think this is silly, but it genuinely made me happy. Just look at the train scene and it genuinely feels like there are people in this world!

The building design is also fantastic. The train has those ceiling grips for people who stand, the halls have sliding doors like real Japanese classrooms, and the city is well designed with front lawns for the rich and apartment complexes for the normies. The developer could reuse this setting for a different game and I would have no complaints.

There are five songs in total. Despite the game having 65 scenes, there are only 5 tracks. They are all digitally synthesized with bass guitar and tones and beeps. There is nothing redeeming about these tired stock tracks.

The most creative scene involved Miko in a part-time job at the adult product store. A customer wants a demonstration on how a certain product works. Miko ends up agreeing to use an onahole on the guy so he’ll trust the product and buy it! She’s just doing her job, jacking off random guys!

Download Miko’s Sexual Adventure. If you like this game and want something more hardcore, check out Park Exhibition JK!