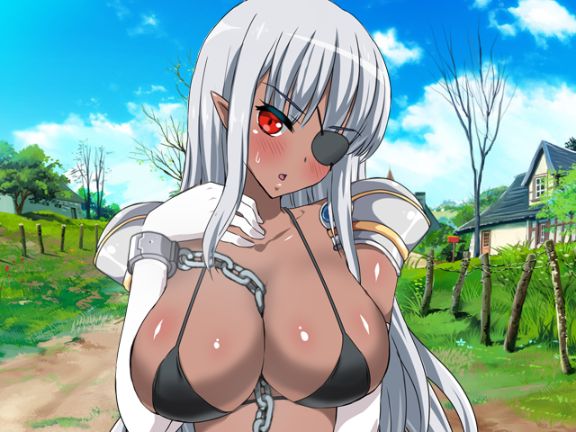 Refia is the greatest swordsmaster of the dark elf clans. But when she’s defeated by an evil dragon, all of her memories are spread across the world! She must have sex with many men to get them back, as part of the dragon’s punishment!

Refia’s memories are gone! She can only get them back if she has sex with swathes of men! With no choices left, Refia begins to explore the world, seducing all the men who have her powers! Only after getting her full strength back, can she finally defeat the dragon.

The writing in this game is very minimal. Refia has two maids who take care of her when she’s injured. Neither of them have personalities, and their only purpose is to explain how Refia can find her powers.

From a cult of pagans to an illegal cave full of prostitutes, the world is huge and has tons of exciting places to explore. The slave markets and orc caves produce incredible opportunities for sexual encounters.

The game has an epic ending. Refia conquers all obstacles on her path, sucks a hell lot of dick, and grows into a widely respected warrior. You’re going to want to play this to the end for the cathartic climax.

Surprisingly, this game has a cuckolding spin-off story that continues the adventures of Refia. She travels back in time and devotes her love to a powerful mage. Rather than whoring it out, this story features Refia fighting off the monsters who wanted to impregnate her.

Knight Slave was created in the RPG Maker game engine. Use the arrow keys to move. Press Z and X to interact with the world. Press CTRL to skip dialogue. Hold the Enter key to speed up battle animations.

The game cycle is simple. Defeat enemies to earn money which you spend in town in exchange for items and weapon upgrades. As you grow stronger, you’ll be able to explore more of the world around you.

Although the game offers a normal mode and an easy mode, there isn’t a big difficulty difference. I wish there was a hard mode, because right now the game can be completed in under four hours.

Fighting boils down to exploiting elemental weaknesses. Some enemies are weak to fire while others are weak to thunder. When using an ability, a combination of keyboard keys must be pressed to activate it, for example, press the up key twice and then the down key twice. As you practice your abilities, you’ll soon memorize the commands and breeze through battles easily.

All dungeons are side-scrollers, and all towns are just menus with choices. You can only see character sprites on the world map and during battle. Elemental weaknesses are shown as symbols above an enemy’s head. If you see a fire symbol, it means they are weak to fire, etc.

The world map is huge and absolutely gorgeous. My only issue is how some areas are unclear and may be missed, like the trader caravan in the final area. It doesn’t appear in an obvious spot, and you may miss it, if you’re not careful.

My biggest complaint is the heavy censorship. With tons of animations and life-like movements, censorship was the only thing ruining my immersion, reminding me I was playing a video game. Pixelated genitals are practically the only flaw in this game.

Knight Slave has no voice acting.

The sound effects in this game are surprisingly unique. Whenever you gain a new ability, your sword changes color and makes a Star Wars lightsaber sound. I found this odd, but very memorable too. Outside of combat, the sex scenes have juicy moaning sound effects. This is not unique voice acting, it’s a simple moaning track to convey the impact of player choices.

There are 87 songs on the soundtrack, many of which are unique to this developer.

All songs are digitally synthesized and loop frequently. This isn’t very noticable though, because you’re meant to play at a fast enough pace that you never notice. Entering battles, leaving dungeons, visiting towns, all of your actions have the potential to change the track. My favorite track had a piano and an organ piano in combination, creating a totally unique composition. Sadly, with over eighty songs in such a short game, they don’t all get the attention they deserve.

Knight Slave has 21 base scenes, all fully animated and totally hot. Many of these scenes play multiple times with different dialogue, most prominently during the post-game netorare side story.

The optional cuckolding plotline introduces the sperm competition fetish. If you have sex with your lover and later have sex with some bandits, who’s baby will it be?!

I notice that you have the game mostly in English, is there a translation patch somewhere?

This is one of those times where the patch cannot be found. It was most likely an edited machine translation originating from svscomics or some other site. ULMF doesn’t have a thread on it. There’s also the possibility this patch came from a patreon Pre-2019. During that year, Patreon began deleting the accounts for many translators. Who knows why.