You’re a Roman from a famed slave trader family. Train your slaves into the perfect sex puppets, and sell them to rich clients!

Disclaimer: At the time of writing, the game has an early build out. This review is not a representation of the finished product.

There’s no overarching story to the game, but there are quest lines which introduce you to the mechanics while teaching you about ancient Rome. The game has a decent conversation system with branching options during speech, which provide backstory.

The progression curve is skewed. You have to grind a lot. Every character has a unique skill tree, so the tediousness of the grind depends on the number of slaves you want to train. You’ll be stuck seeing the same few sex positions for a long time if you want to accumulate currency. You’ll also be stuck seeing the whip punishment scene numerous times when farming skill points to unlock new sex positions.

There is a custom slave creator, where you can design your very own personal sex slave, but unfortunately the feature is locked behind the $50 Patreon tier.

Thankfully, there is a customization feature for the slaves you already own. you can change their weight, boob size, butt size and even give them elf ears! In the most recent update, the developer added a futanari option!

The game is made using Unreal Engine. 3D models look pretty good. The models do get roughed up during punishment scenes, their skin gradually gets redder, whip marks appear the more you whip. The bruises disappear at the end of a session. There is a wide variety of characters. There’s multiple races and physiques, and their bodies all have a tinge of shininess, as if lathered in lotion.

There is a minimap in the game but it is still in a very barebones state. All it shows are the basic structures without showing where the NPCs are. And with the map being so cluttered with houses, it’s practically useless since most of the time you’ll be surrounded by houses with no indication of where your objective is.

On the bright side, the environments all look very detailed. This is easily one of the best-looking 3D worlds in an adult virtual reality game. I was disappointed that these environments are not used more. I would have liked to be able to fuck the slaves anywhere I choose instead of in pre-determined locations, such as the dungeon.

When it comes to audio, you hear generic sex sounds, moans and whatnot. A random thing I noticed was the thrusting sounds, which were very pronounced and very notable in the sex scenes. I would have liked more environmental sounds to couple with the amazing landscapes.

Characters tend to say some lines during sex, such as “I’ll do anything!” or “Please Stop!” but only the subtitles show up, as there’s no actual voices being heard. Some characters have voice acting in quest lines, but the quality varies greatly. Some actors show emotion in their lines while others felt like plain reading off a script.

To my dismay, there is no music in the game aside from the opening cutscene. Some ambient music would be a welcome addition.

I was not able to get virtual reality working for sex scenes. I was only able to float in the sky and alternate between positions playing out while flailing my two flying hands. I’m not sure whether it is my headset or the game because I was able to get the whip punishment game working. That was a decent VR experience. The whip movement was good and you can feel impact when whipping your slave.

Not all scenes are playable in VR and you’ll have to hop in and out of VR during gameplay. 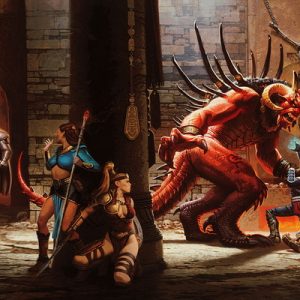